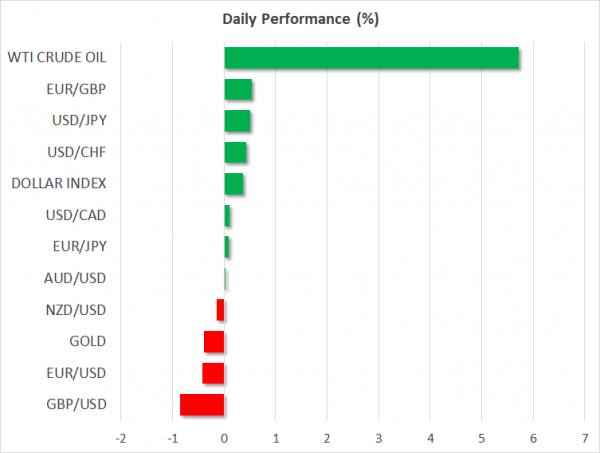 Some joy from bounce in Chinese PMIs

Markers were in a relatively upbeat mood on Tuesday as encouraging PMI numbers out of China and a positive close on Wall Street lifted shares in Asia. European indices jumped more than 1% at the open and US futures were in the green too, suggesting the global recovery in stocks is being sustained for now.

A strong bounce in China’s official manufacturing and non-manufacturing PMIs for March provided a glimmer of light at the end of the tunnel for much of the rest of the world that has yet to see a peak in the deadly coronavirus pandemic. Both PMIs recorded a print above 50, indicating expansion in economic activity.

However, many traders were sceptical about the numbers given how slowly businesses in China’s hard-hit areas have been allowed to resume normal operations and this was reflected in the mild gains seen across Asia today. Shares in Japan (-0.9%) and Australia (-1.6%) couldn’t even recoup losses and closed lower, though end of quarter rebalancing flows might have played a part.

Has the virus peaked in Europe?

Another reason for the markets to be optimistic about were signs that the virus spread has started to slow in Europe, especially in Italy where the number of new cases fell for a third straight day. However, with health officials warning against relaxing tough lockdown measures too early and fears that other countries such as the United States may see more surges in confirmed cases before things get better meant that there was plenty for investors to be cautious about.

Even if more and more countries do start to have some success in containing the virus, what’s becoming evident with each passing day is that it will probably be months before the shutdowns and travel restrictions are fully lifted. And until investors are able to put a cost on the economic impact, it will be difficult to foresee an end to the market turmoil.

There was little holding back the dollar on Tuesday as month-end rebalancing flows sparked demand for the US currency. The dollar index inched up by 0.3% as the yen, euro and pound all lost ground to the greenback. The pound was the worst performer as worries about Britain’s massive spending plans to protect the economy from the virus fallout weighed on the outlook for the UK.

The yen didn’t fare much better and was down across the board as positioning adjustments by Japanese investors due to the end of Japan’s fiscal year triggered a rush for dollars. Dollar/yen was last up 0.5% at 108.29.

The Australian dollar also struggled despite the improved risk tone and higher commodity prices. Oil prices rallied today, jumping by more than 5%, on reports that the US and Russia are in talks to try and stabilize the market.

Looking ahead, the consumer confidence index in the US will be watched to get an idea of how badly the virus outbreak has hurt US households in March. 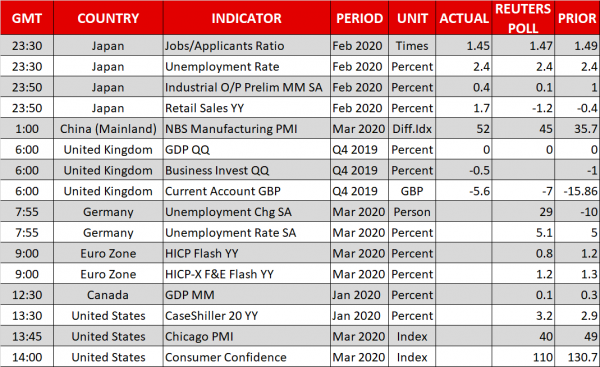