The pound has bounced back from the lows it brushed soon after news broke that the UK prime minister, Boris Johnson, has been moved to intensive care a day after being hospitalized for continuing to show symptoms of the coronavirus. Johnson spent a second night in intensive care on Tuesday but the latest is that his fever has eased, meaning the pound’s immediate downside risk has also subsided. However, with the prospect of the prime minister being out of action for some time, are investors underestimating the likely impact this might have on the UK’s fight against the virus?

Johnson’s approach to dealing with the outbreak of COVID-19 hasn’t exactly been exemplary. The UK government initially adopted a strategy of ‘herd immunity’ whereby it allows the virus to pass through enough people, possibly infecting as much as 60% of the population, with the aim of creating immunity from it. But herd immunity best works when the immunity is achieved through vaccination rather than via infection.

Hence, it was no surprise when the flaws in Johnson’s plan soon became apparent. For one, when the virus in question has a high hospitalization rate, allowing it to spread freely would cripple the country’s health system if everyone becomes infected at the same time. This has turned out to be the case in most countries even after strict lockdown measures have been imposed so the consequences of the wider population getting infected are unthinkable. 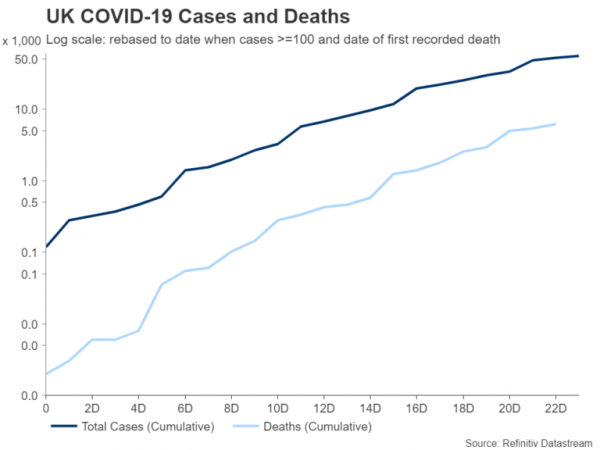 But the main reason that appears to have pressured Johnson to rethink his strategy was the dismay expressed by other European leaders at his refusal to follow their lead and enforce tougher restrictions. France reportedly threatened to close its borders with the UK unless the British government saw sense.

The UK’s fumbled response may have contributed to sterling’s exaggerated slide during the dollar funding squeeze. The pound has since recouped about half of those losses, but Johnson’s hospitalization now threatens to cause fresh misery for the currency. Cable dropped 150 pips on the news that the PM was moved to an intensive care unit after his health worsened. It has steadied on reports that he is on the mend, but further volatility is guaranteed if his condition deteriorates again.

Is there a leadership vacuum?

However, the risks for further downside are high even if Johnson’s health remains stable but he is forced to stay in hospital for an extended period. A long absence from Downing Street would potentially create a leadership vacuum, raising fresh concerns about the UK’s virus crisis management.

The pound’s troubles are therefore far from over and with the spike in the risk premium investors have been demanding for holding the British currency since the virus fallout, any sell-off is likely to be severe, as recently demonstrated.

Risk of $1.14 level being revisited

Traders should watch the $1.22 level as an immediate support area. If breached, the decline could be halted at $1.18, just below the 23.6% Fibonacci retracement of the March down leg. Otherwise, panic selling could see the recent 35-year low of $1.1404 being tested once again.

In the positive scenario where Johnson gets released from hospital and there is confidence about the UK’s tackling of the pandemic, cable could recover above the 61.8% Fibonacci of 1.2513 and make an attempt to trade on the north side of the 50- and 200-day moving averages.

GBP/USD Shifts To A Bullish Bias