Economic forecasting during Covid-19 is like being in the ring with a pro boxer – you have to move quickly and often. We have updated our economic and financial forecasts to account for new information since our last forecasts were issued in late March. Our new forecasts are detailed in the table on page 4 and will be fully explained in a later document, but the broad contours are:

One key conclusion we drew from the above is that inflation will drop well below 1% unless the Reserve Bank and Government act very vigorously to stimulate the economy. The Government has ponied up with massive fiscal stimulus, and we expect roughly another $15bn of stimulus measures at May’s Budget. But there is a limit to what the Government can provide before the debt projections become unacceptably high, especially with the aging population looming over our fiscal future.

Monetary policy not only needs to come to the party, it needs to spike the punch.

So far, the Reserve Bank has reduced the OCR by 75 basis points to 0.25%, committed to keeping it at that level until March, and has committed to buying $33bn worth of government and local government bonds. This is known as Quantitative Easing (QE), and it has the effect of reducing long term interest rates. The Reserve Bank’s key decisions were made on March 16, before the country went into lockdown. In our assessment, the Reserve Bank is going to have to step up and deliver much more monetary stimulus.

At the May MPS, we expect the Reserve Bank will almost double its QE programme to $60bn. We estimate that total Government debt will be over $130bn by June next year, so the Reserve Bank will be on track to own about 45% of the New Zealand Government Bonds on issue. In our assessment even more monetary stimulus will eventually be required. In theory the Reserve Bank could just continue with an even bigger QE programme. But based on RBNZ commentary, we think they would prefer to switch to a negative OCR at that point. The RBNZ has said that it would be uncomfortable owning much more than 40% to 50% of the total bond market, because this would affect market liquidity and functioning. By contrast, the RBNZ has previously said that it favours the option of a negative OCR.

We forecast that the RBNZ will lower the OCR by 75 basis points to -0.5% in November this year. There are two impediments to the RBNZ reducing the OCR earlier.

The first is that trading banks’ systems are not currently ready to deal with a negative OCR – changes to documentation and computer systems are required. Holding off on a negative OCR until November should get around that, but the timing of the RBNZ’s move will depend on how long it takes trading banks to prepare, which is uncertain.

The second impediment is that lowering the OCR this year would break the RBNZ’s commitment to keep the OCR at 0.25% until March 2021. The RBNZ could probably hold its head high by pointing out that the Level 4 lockdown was a truly extraordinary event, and we doubt they would come in for much criticism. However, any move to break an earlier commitment would have to be carefully explained and justified.

Forward guidance and a long lead time would help with both of the above problems. The RBNZ could signal earlier in the year that it intends to move to a negative OCR – or least that it is open to such a move. This would have the effect of reducing wholesale term interest rates immediately, effectively amounting to a monetary stimulus. We expect that the RBNZ will signal either its intent or its willingness to move to a negative OCR at the August MPS.

We have previously written about the impact of a negative OCR.1 The lower the OCR goes, the less marginal impact it would have on retail rates such as mortgage rates. Thus a 75 basis point cut from 0.25% to -0.50% would bring mortgage rates down, but not by anything like as much as 75 basis points. We estimate that, in New Zealand, the OCR could go down to -1% before further cuts had zero impact on retail rates. This effective lower bound is lower in New Zealand than in many other countries, because in New Zealand bank deposit rates are higher relative to the OCR.

To clarify, we do not expect any of the interest rates paid or received by New Zealand households and businesses to go negative. In overseas jurisdictions with negative official interest rates, retail rates have almost always remained positive. We do, however, expect the 90-day bank bill to go slightly below zero. This is an interbank rate, but some business interest rates are expressed as a margin over the 90-day bank bill. Our forecast for the two-year swap rate is that it will reach a low-point of zero before rising again from September 2021. 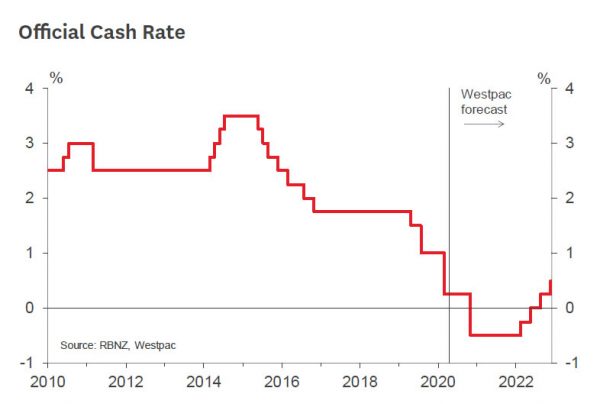 All charts in PDF.