The USD edged higher yesterday even though US financial indicators like the Markit Composite and Services PMI’s dropped significantly to 27 and 26.7, correspondingly. The International Trade moved even deeper in the negatives (-44.4B), also displaying weakness. On the other hand, the ISM non-Manufacturing PMI gave some confidence as its figure was lower yet better than expected (41.8). Furthermore, analysts remain divided on whether the global economy is in a recession or a recovery while the USD keeps getting the best out of its major counter parts during the latest sessions. Traders seem to favor the USD over the weak US financial data but also are backing a risk on sentiment, after US stock markets moved higher yesterday. Also, during the past days more and more headlines are making their way into the media on a possible confrontation between the US and China, regarding the trade front. According to Reuters, the U.S. Commerce Department, State and other agencies are looking for ways to force US companies to cut their activities in China and move them into other countries they consider as more trusted. (Economic Prosperity Network). As a conclusion, it is becoming evident that the USD continues to gain momentum even as things get more difficult for the US economy. This could also be appointed to some US states restarting activities. USD/CHF was among the majors currency pairs that has most evident the USD’s strength in yesterday’s session. The Swissy moved higher and surpassed our (S1) 0.9703 which was turned into a support level. Other support levels lower are the (S2) 0.9650 that was tested from the 4th to the 5th of May while even lower we have the (S3) 0.9595 line last tested on the 1st of May. Levels in a possible upward momentum are the (R1) 0.9765, the (R2) 0.9795 both last seen in April and the (R3) 0.9835 last seen in late March.

Germany’s top court ruled that the Bundesbank should clarify with the ECB, why its bond buying program meets its proportionality for the next months. It is not clear if the German court is against or in favour of the Central Bank’s stimulus scheme yet it seems that they would like the ECB to justify the purchases, prior to proceeding with them. According to reports, the ruling was not aimed at the PEPP program that the ECB brought forward to counter economic losses incurred from the virus outbreak. The news is rather bearish for the EUR, as it not only puts pressure on ECB by the means of legal action, it also implies that the Germans may have doubts over the ECB’s actions to support the Euro block financially. The EUR moved lower against many other counterparts yesterday and the upcoming financial releases today during the European morning, could provide reason for further volatility. EUR/USD has been in a downward momentum since the 1st of May, yet the momentum intensified during yesterday’s European and American session. In a possible continuation of the current selling momentum the first level to be approached in our opinion is our (S1) 1.0820. Lower, we have the (S2) 1.0750 support level and even lower the (S3) 1.0680. In a possible buying trend, the levels we have noted are the (R1) 1.0870, the (R2) 1.0935 and the (R3) 1.0987.

In the European session today we get Germany’s Industrial orders for March, France’s Markit Services PMI final for April, Eurozone: Markit Composite PMI final for April, the UK’s Markit/CIPS Construction PMI for April. In the American session we get the US ADP National Employment for April, Survey and the EIA weekly crude stocks for week ended 2nd of May. During tomorrows Asian session we get from Australia the Trade balance for March and China’s Caixin Services PMI for April. 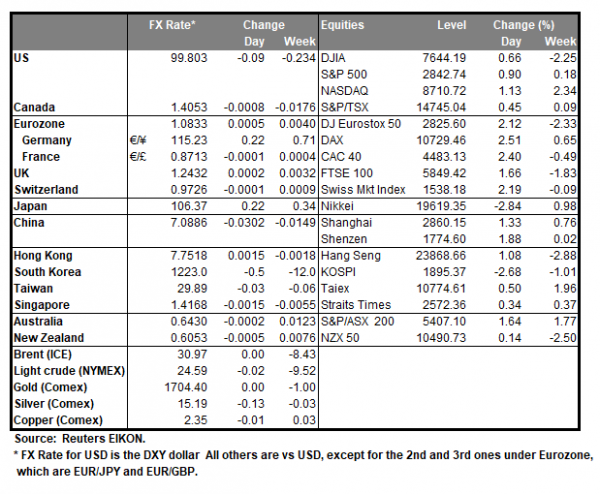 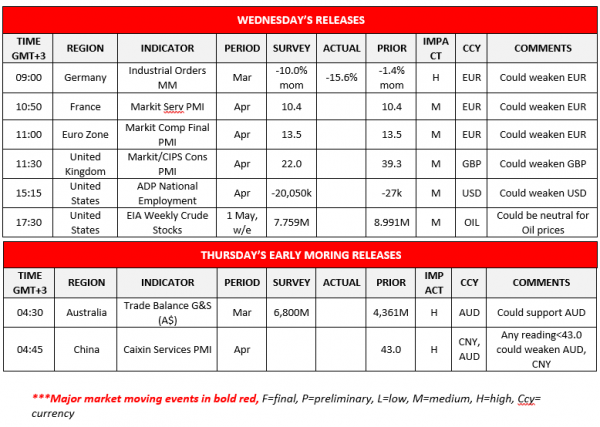