The USD lost ground against a number of its counterparts since Friday, as ,b>market sentiment improved due to further easing of the lockdown measures in various parts of the world. It should be noted that the US employment data for April came out better than expected, yet remain massive with unemployment being at 14.75% and non-farm payrolls erasing around 20.5 million jobs in one month. Practically the US employment market, in April alone, erased any gains in new jobs made since the 2010 financial crisis. Please note that analysts tend to start looking beyond the severely adverse economic numbers as they may be priced in already. Also, the US government seems to consider an additional stimulus for the economy. The pound was little changed against the USD and the common currency, despite British Prime Minister Boris Johnson revealing plans to slowly start easing the coronavirus lockdown restrictions imposed in the UK. The news may support the pound somewhat, yet pound traders may be eyeing the GDP releases on Wednesday in order to get a better picture and continue to worry about Brexit. The Australian dollar rose against the USD during the Asian session as was expected. The commodity currency is often traded as a proxy for risk because of its wide exposure to China’s economy and global commodities. Please note, that a new cluster of infections in north eastern China, creates worries. Should the uncertainty in China about the new cluster rise further we could see the Aussie starting to weaken. AUD/USD moved higher since Friday, distancing itself from the 0.6490 (S1) support line. We maintain our bullish bias for the pair and for it to change we would require a clear breaking of the upward trendline incepted since the 7th of the month. Should the bulls maintain control over the pair, we could see it breaking he 0.6615 (R1) line and aim for the 0.6700 (R2) level. Should the bears take over, we could see the pair breaking the prementioned upward trendline, the 0.6490 (S1) line and aim for the 0.6385 (S2) level. JPY weakened against the USD as safe haven flows were against it, while according to media, Japan is considering lifting the state of emergency in most Japanese prefectures this month. BoJ’s summary of opinions, released today highlighted the high downside risks for the prospects of economic recovery. USD/JPY rose breaking the 106.60 (S1) resistance line, now turned to support. We would require more green candlesticks in order to support a bullish outlook for the pair and consider the current situation of the pair as still fragile to either side. Should the pair’s long positions be actually favoured by the market, we could see it aiming, if not breaking the 107.75 (R1) line. Should the pair head south, we could see it breaking the 106.60 (S1) line, aiming for lower grounds.

Today, during the European session, we get Norway’s inflation measures. The main load of financial releases is expected during tomorrow’s Asian session, as we get China’s CPI and PPI rates for April as well as Australia’s NAB business conditions and confidence indicators for April. Also, Chicago Fed’s Evans is to speak today.

On Tuesday, from China we get the CPI and PPI rates for April and from the US the CPI rates also for April. On Wednesday, from Japan we get the current account (for Goods) balance for March, Australia’s wage price index for Q1, from New Zealand RBNZ’s interest rate decision, from the UK the GDP rate for Q1, the manufacturing output for March and the trade balance for March, from the Eurozone we get the industrial production growth rate for March and from the US the PPI rates for April. On Thursday, Australia’s employment data for April and the US initial jobless claims figure. On Friday, we get from Japan the corporate goods prices growth rate for April, China’s industrial output for April, the US retail sales for April, the US industrial production for April and the Michigan consumer sentiment for May. 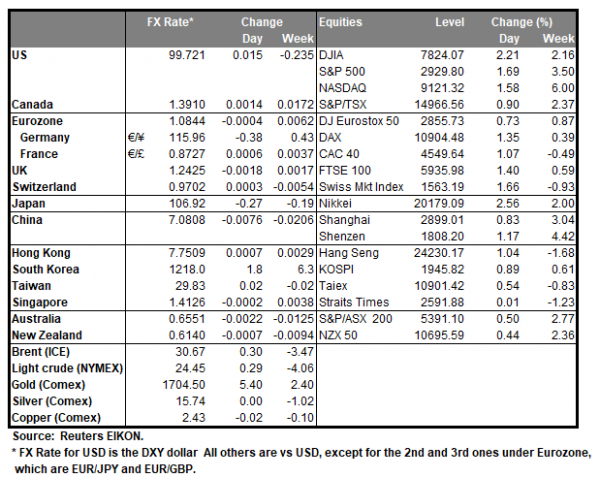 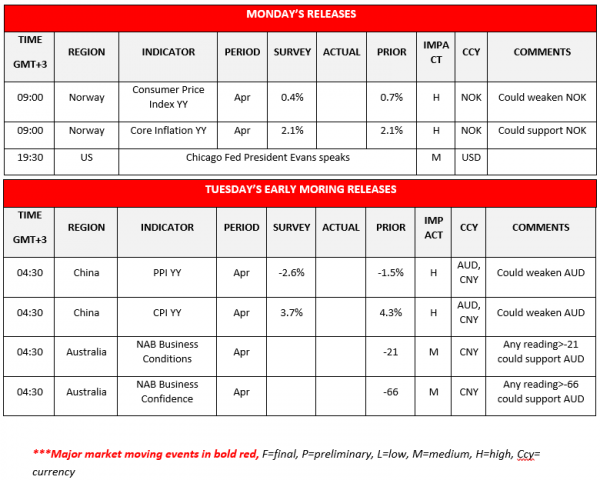