RBNZ remained on hold today at +0.25%, as was widely expected, yet nearly doubled its QE program to reach 60 billion NZD. The Kiwi reacted bearishly to the news dropping around 65 pips upon release, as the bank also stated that it is prepared to cut the cash rate further if required, while the balance of economic risks remain to the downside. The expansion of the QE program can be scaled as needed and aims to cut borrowing costs quickly, while there was consensus on the decision. The bank’s Governor in his press conference later on, stated that he is pleased with the effectiveness of the QE program, while also said that the bank will retain all of its options open if further stimulus is needed and will assess the use of negative rates. In addition to the release, Kiwi was also bearishly affected by the deteriorating relationships of New Zealand with China on the political front. We could see NZD moving lower as the market still digests the news, yet the market sentiment could affect the commodity currency’s direction. NZD/USD dropped 65 pips upon the release of RBNZ’s interest rate decision aiming for the 0.6000 (S1) support line. As the pair broke the upward trendline incepted since the 3rd of April, we switch our bullish outlook for the pair in favor of a sideways movement scenario. Please note that the 0.6000 (S1) held its ground on the 26th of April and the 7th of May, containing the pair’s drop, hence could prove quite a support line once again as it is to be set under the test once again. Should the pair’s long positions be favored by the market, we could see NZD/USD aiming if not breaking above the 0.6110 (R1) line. If the pair comes under the selling interest of the market, we could see it breaking the 0.6000 (S1) line and aim for the 0.5925 (S2) level.

The pound continued to fall against the USD as well as the EUR and JPY, as confusion seems to prevail about the UK government’s plans for easing the lockdown measures imposed. It should be noted that the UK extended its job retention scheme, in which the government pays 80% of furloughed workers’ wages, for another four months until the end of October, according to media, yet the pound seemed not impressed. On the other hand, the UK government’s proposals for lifting the lockdown measures were widely criticized as unclear whether UK would return to work. Also, it should be noted that UK’s death toll has surpassed Italy’s and is now the worst hit part of Europe in that perspective. Analysts tend to be cautious with the GBP, as the overall picture goes from bad to worst and in addition to that, Brexit risks still surround the sterling. Such a picture may not bode well for external investors which are important for the UK economy. Pound traders could also be focusing on UK’s financial releases today, which are expected to have adverse figures. GBP/USD dropped yesterday, aiming for the 1.2200 (S1) support line, yet seems to have been stabilizing during today’s Asian session. We maintain the bearish outlook for the pair, yet today’s financial releases could alter the pair’s direction. Should the bears retain control over the pair’s direction, we could see it breaking the 1.2200 (S1) support line and aim for lower grounds. Should the bulls take over, cable could break the 1.2400 (R1) resistance line in search of greener pastures.

Today during the European session, we get UK’s GDP growth rates and manufacturing output growth rates. Also in the European session we get Eurozone’s industrial production growth rate for March. In the American session, we get the US PPI rates for April and the EIA crude oil inventories figure. During tomorrow’s Asian session we get Australia’s employment data for April. As for speakers ECB’s Lane and de Guindos are scheduled to speak, yet focus is on the Fed Chair Powell’s speech in the American session. We expect that the Fed’s Chair could reiterate that the Fed is to abstain from negative rates, while at the same time also reiterate the bank’s willingness and ability to boost the US economy. 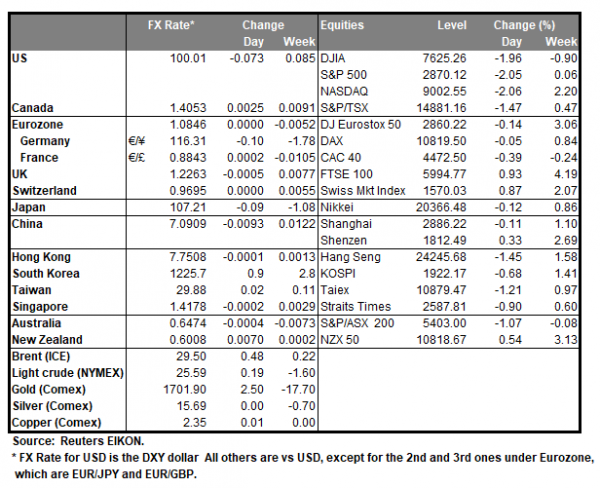 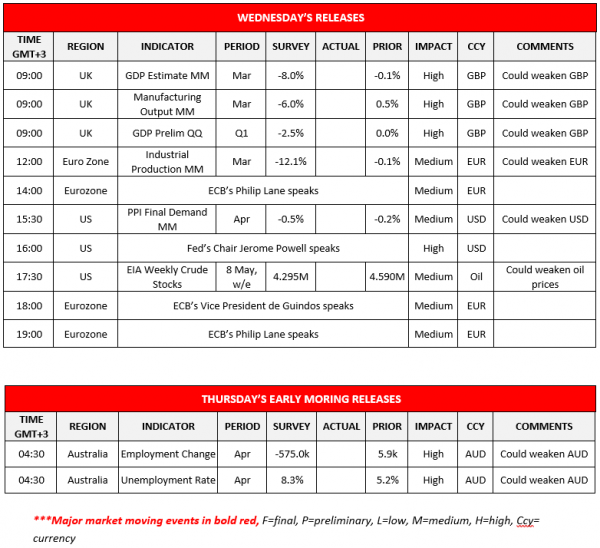 British Pound Trading On A Stronger Footing This Morning