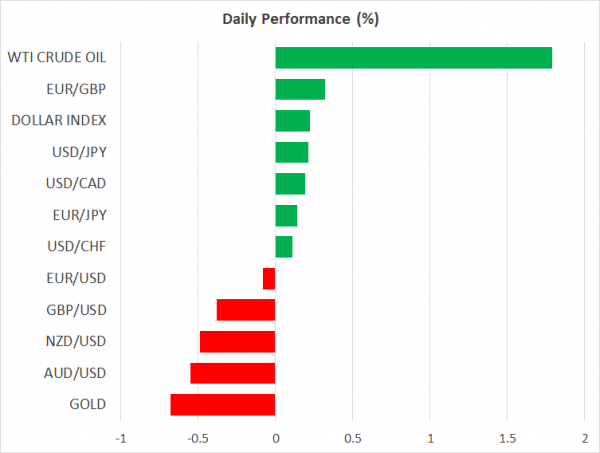 Close your eyes and you wouldn’t know we are in the middle of a deep recession. At least not by looking at the Nasdaq 100 (+2%), which closed less than 3% away from its record high, energized by Facebook hitting an all-time high of its own after unveiling its new online shop. The Nasdaq has been a major outperformer throughout this crisis due to its concentration of mega-tech names that have healthy balance sheets and can benefit from consumers staying at home, effectively making it the new ‘counter cyclical’ play.

Meanwhile, although the S&P 500 (+1.7%) managed to close above the range that had confined it over the past month or so, futures point to a ~0.8% lower open today, raising questions about whether this is a real or false breakout.

Risk sentiment turned sour after the White House released a lengthy document accusing China of predatory economic practices, disinformation campaigns and human rights violations, highlighting once again that relations are becoming colder at lightning speed. That was followed by a furious twitter storm from the US Commander-in-chief, who blamed the Chinese leadership for orchestrating a ‘propaganda attack’ against America and for not stopping the pandemic.

On top of everything, the US Senate unanimously approved a bill that could block companies ‘controlled’ by foreign governments from listing their shares on US exchanges, another jab against China in the escalating trade, tech, and capital war. Take a moment to consider that the only subject that truly unites US lawmakers and transcends party lines is anti-China sentiment, and what that means going forward, especially in an election year.

Beyond denting sentiment in stocks, the seething tensions have also helped the defensive dollar to find its footing on Thursday, snapping a three-day losing streak that was partly owed to a resurgent euro after the EU recovery fund news.

Admittedly though, both the pullback in stocks and the uptick in the dollar have been modest, which may be a two-fold signal that investors still view the US-China saber rattling mostly as pre-election theatrics, and that the enormous stimulus sedative is still working. Arguing in the same direction, neither the yen nor gold are benefiting from the more defensive mood today, while crude oil is extending its gains, all indications that this is just a mild dose of risk aversion.

Pound turns down after Bailey opens door to negative rates

The British pound was unable to capitalize on either a weaker US dollar yesterday or the ‘risk on’ mood, instead falling victim to some remarks by Bank of England Governor Bailey, who suggested that negative interest rates are under ‘active review’. That was a complete turnaround from just a week ago, when he said this wasn’t “something that we are currently planning for or contemplating”.

Note however that this could also be a trick. Simply by not ruling anything out, the Bank can get markets to bet on negative rates, which loosens financial conditions and has similar effects to a rate cut – but without actually cutting rates. Alas, by playing this game, the BoE risks being boxed into acting if markets continue to price this in. Either way, as long as this option is on the table, it’s just another factor that will limit any sterling upside. 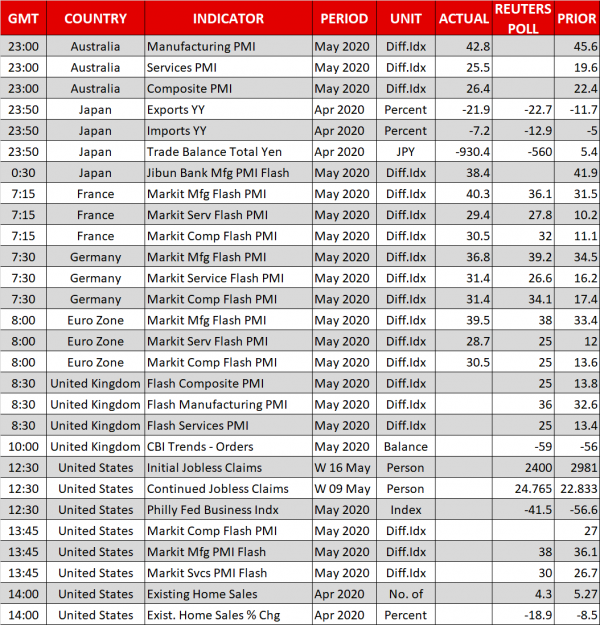