The USD seemed to be supported by safe haven flows as the US-Sino tensions escalated in the past few days. The tensions were highlighted by the standoff over Hong Kong’s civil liberties, after protests in Hong Kong and the US intentions to sanction China. It was characteristic that China’s foreign minister in a rather angrily response, stated that some in America were pushing relations to a “new Cold War”. The official continued to say that China has no intention to change the US, nor replace the US and that it is wishful thinking for the US to change China. Analysts tended to note that things were already bad, and it is likely to get worse because of the Hong Kong security law in addition to the pandemic that caused a financial crisis. Please bear in mind that Washington and Beijing are also in a stand-off also over Chinese companies’ access to high tech and US criticism of China’s response after the COVID 19 emerged in late 2020 in Hubei, a Chinese province. We expect safe haven flows to dominate once again yet, financial releases could also provide some volatility. EUR/USD dropped on Friday in the European session but seemed to stabilize near the 1.0890 (S1) support line later on and during today’s Asian session. We tend to expect a continuance of the sideways motion, yet safe haven flows may provide support for the USD over the common currency. If the bears actually regain control over the pair, it could clearly break the 1.0890 (S1) line and aim for the 1.0835 (S2) level. In a buying momentum, we could see EUR/USD aiming if not breaking the 1.0950 (R1) line and aim for higher grounds.

On another front it should be noted that the pound against the USD, seems to be on the retreat as the UK Prime Minister faces political pressure to dismiss Dominick Cummings, an influential advisor after breaking travel restrictions during the lockdown period. Also, the GBP was under substantial pressure as the retail sales growth rate dropped by a record -18% mom in April, reflecting the negative impact of the lockdown measures on consumption. Also, the specter of BoE employing negative interest rates, as well as the lack of progress in the Brexit negotiations seem to weigh on GBP. Given that few financial releases are scheduled from the UK this week, political and monetary fundamentals may have the upper hand for pound traders. GBP/USD continued to drop on Friday and during today’s Asian session, slipping below the 1.2200 (R1) support line, now turned to resistance. We maintain a bearish outlook for the pair, as the downward trendline incepted since the 19th of May seems to continue to guide cable’s direction (see chart below). Should the pair remain under the influence of the bears, we could see downward trendline steepening and GBP/USD aiming for the 1.2015 (S1) line. Should the bulls take over, we could see GBP/USD breaking the 1.2200 (R1) line and aim for higher grounds.

Today during the European session, we get Germany’s detailed GDP rate for Q1, as well as Germany’s Ifo business climate indicator for May. In the early Asian session, tomorrow, we get New Zealand’s trade balance for April. As for speakers, please note that BoC Governor Poloz is scheduled to speak.

On Tuesday, Germany’s GfK Consumer Sentiment for June, UK’s CBI distributive trades for May and the US consumer confidence are due out. On Wednesday, no major financial releases are expected. On Thursday, we get Australia’s capital expenditure for Q1, Eurozone’s economic sentiment for May, Germany’s preliminary HICP for May, the US durable goods rates for April, the 2nd estimate of the US GDP rate for Q1, and the latest US initial jobless claims. On Friday, we get from Japan Tokyo’s CPI rates for May and the industrial production for April, Germany’s retail sales for April, France’s preliminary CPI (EU normal.) for May as well as Eurozone’s preliminary CPI for May, the US consumption rate for April and Canada’s GDP rate for Q1. 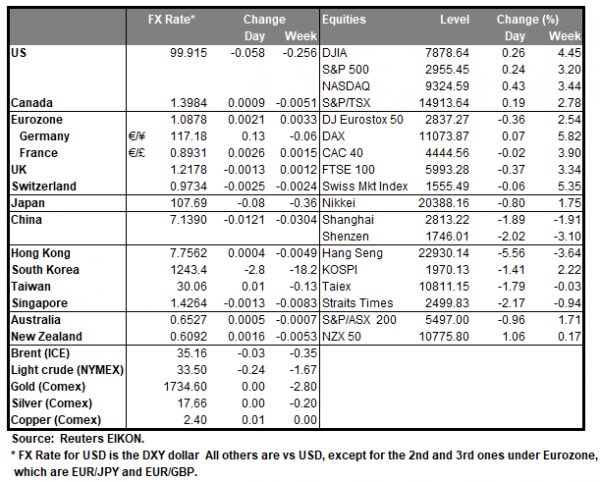 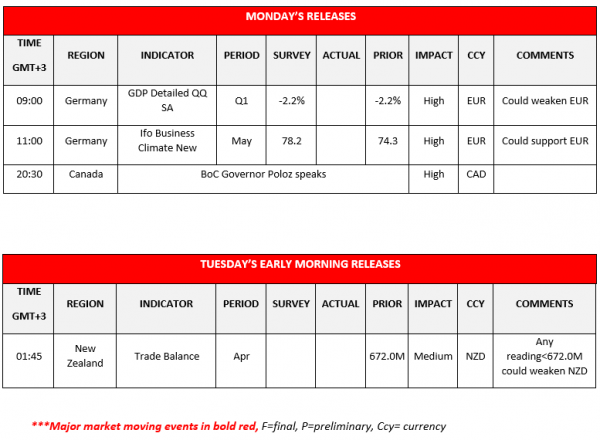