Sentiment towards risk continued to improve with European stocks and US index futures sharply higher this morning, before easing back a little as we approached midday in London. Travel and leisure shares were leading the charge thanks to a pickup in easing of lockdown measures. Safe-haven dollar fell further, and the pound surged after the UK government announced more lockdown easing steps for mid-June.

Risk appetite has been improving for a good couple of months now, partly on hopes over a vaccine but mainly because of expectations that the massive central bank and government stimulus packages announced in response to Covid-19 pandemic will fuel a speedy recovery in demand. The rally has been gaining renewed strength over the past week or so as major economies are re-opening again. Momentum buying – traders buying because markets are rising – has further aided the recovery.

It is not just the Fed. Nearly all major central banks have ramped up their QE programmes and have promised to do more if needed. The Governor of People’s Bank of China has become the latest central bank head to pledge more. Yi Gang said the PBOC will strengthen its economic policy and continue to push for lower interest rates.

For now, the markets are choosing to concentrate on the positives than the negatives. They are largely shrugging off increasing US-China tensions, and economists’ warnings about the speed of the recovery. But soon optimism may very well fade away and reality will bite. Then, investors will find it difficult to justify holding certain stocks in an environment where the economic future looks highly uncertain. For now, though, they are happy to continue buying the dips and ask questions later.

The ongoing Federal Reserve stimulus and a ballooning balance sheet has allowed most risk-sensitive foreign currencies to rally alongside the equity markets.

With stocks surging, haven dollar has been weakening. And thanks to the ever-expanding Fed’s balance sheet (now in excess of $7 trillion compared to just over four at the start of March), the greenback has been increasingly viewed by market participants as a funding currency.

Pound rises from the ashes

The pound has been among the laggards due to the severe economic impact of Covid-19 and the prolonged lockdown measures in the UK. Today, however, it has risen from the ashes, finally joining the risk rally after the government’s announcement that non-essential jobs can re-open next month.

The GBP/USD has been slow to catch up with other dollar pairs and with the risk-on rally, but the cable was up nicely this morning as traders welcomed the announcement that non-essential shops in England can reopen from 15th June and outdoor markets from 1st provided rates of infection do not spike. 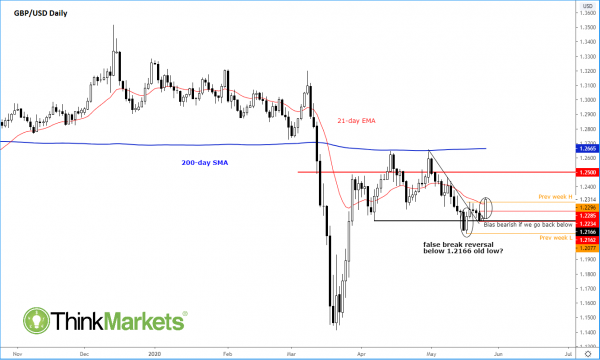