The USD weakened across the board yesterday as market sentiment improved due to the reopening of various economies around the world, yet later on seemed to be on the rebound having some safe haven inflows. Analysts tend to mention worries of a possible escalation in the tensions characterizing the US-Sino relationships as the main reason for USD’s inbound safe haven flows. Media report that the US President is to announce before the end of the week the US response to China’s planned security bill which will apply to Hong Kong. Trump is under pressure from both parties in Congress to respond and headlines tend to mention that the US considers new sanctions on Chinese officials and firms over the matter. At the same time, it should be mentioned that Hong Kong’s special trade status could be under threat as the US may be reconsidering its stance. We expect further escalation in the relationships of the two countries as China’s response is looming, yet at the same time we would like to repeat that the market seems caught between two opposite currents as at the same time markets are reopening. AUD/USD rallied yesterday breaking the 0.6565 (S1) resistance line, now turned to support, and continued higher to test the 0.6650 (R1) resistance level. We maintain our bullish outlook for the pair as it continues to remain above the upward trendline incepted since the 15th of May. Should the bulls actually remain in charge of the pair’s direction, we could see AUD/USD breaking the 0.6650 (R1) resistance line and aim for the 0.6750 (R2) resistance level. Should the bears take over, we could see the pair breaking the prementioned upward trendline, the 0.6565 (S1) support line and aim for the 0.6490 (S2) support level.

The GBP strengthened against the USD, EUR and JPY yesterday also fueled by a general positive market sentiment in the markets. However, the pound had additional reasons to surge as progress was reported regarding the Brexit negotiations. According to Reuters the EU is willing to shift its stance on fisheries in negotiations with Britain next week, which could be a major concession on EU’s part in the EU-UK negotiations about their future relationship. Also, the easing of the lockdown measures, with outdoor markets reopening under certain guidelines, and all other non-essential retail from June 15, as announced by UK’s PM Johnsons, tended to improve the market sentiment towards the pound. Headlines about Johnson’s senior adviser Cummings are still present, yet the issue may be ranking in lower positions for the markets, after the developments mentioned above, especially the one concerning Brexit. GBP/USD rose yesterday breaking the 1.2235 (S2) and the 1.2300 (S1) resistance line, now turned to support yet fell short of breaking above the 1.2375 (R1) resistance level, as it corrected lower. We expect a sideways motion of the pair today, yet safe haven flows for the greenback could provide bearish pressures for the pair. Should the pair come under the selling interest of the market, we could see cable breaking the 1.2300 (S1) support line and aim for the 1.2235 (S2) support level. On the flip side in a buying momentum, we could see GBP/USD breaking the 1.2375 (R1) resistance line, aiming for higher grounds.

Today during the European session, we get Norway unemployment rate for March and France’s Consumer confidence for May. Also please note that yesterday’s release of France’s business climate for the same month was postponed for today. In the American session, we get Canada’s building permits growth rate for April and just before the Asian session starts, we get the US API weekly crude oil inventories figure for the week ended on the 22nd of May. During tomorrow’s Asian session, we get New Zealand’s business outlook for May and Australia’s CapEx for Q1. As for speakers, please note that ECB’s President Lagarde, ECB’s de Guindos, St. Louis Fed President Bullard and Atlanta Fed President Bostic are scheduled to speak. 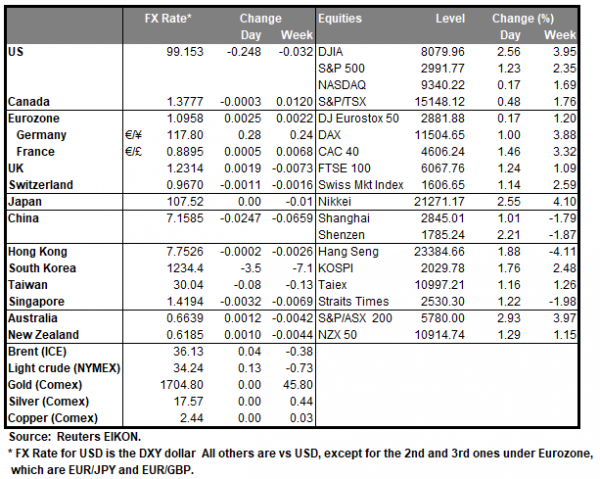 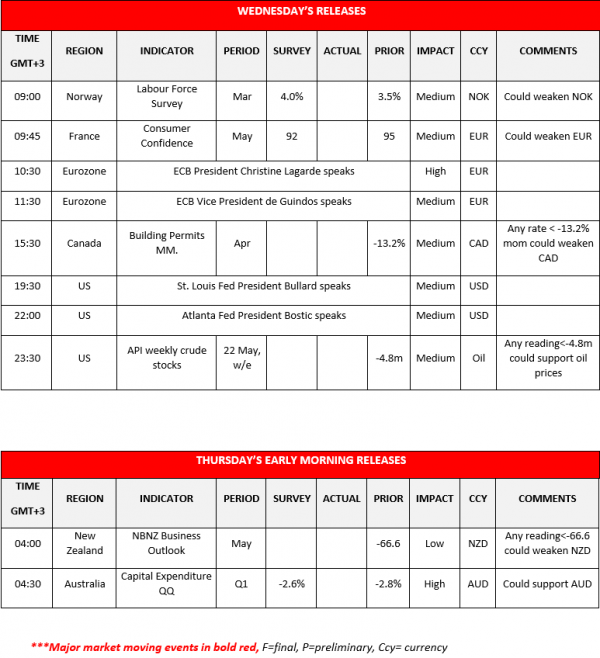