The USD remained firm against a number of its counterparts yesterday as worries about the US-Sino tensions polished its safe-haven qualities. Tensions in the US-Sino relationships tended to escalate, especially about Hong Kong, as the US is preparing a range of options to sanction China. Also the tensions at the Sino-Indian border provide reasons for worries given the affiliation of India’s PM Modi to the US. On the contrary, we find offer for intervention by the US President as at least ironic, given the current US-Sino tensions. We expect US-Sino tensions to escalate as analyzed in prior reports, as possible US sanctions are still looming and given the antagonism between the two countries. Also, we would like to repeat that the US-Sino tensions are not a Trump issue, as bipartisan support to the possible sanctions is present among US Congress members. Main victims of the situation seem to include the NZD and the AUD, which have substantial exposure to China. Characteristically a Financial Times report which stated that coal traders expect China to tighten import rules, may have also weighed on the AUD yesterday. At the same time, tensions between Australia and China are also escalating in regards to the pandemic, as Australia favors an independent inquiry into the origins of the pandemic. If the situation escalates, we could see the USD strengthening, while AUD tends to weaken. AUD/USD dropped yesterday as it failed to break above the 0.6650 (R1) resistance line. We maintain a bullish outlook for the pair and for it to change we would require a clear breaking of the upward trendline incepted since the 15th of May. Should the bulls actually remain in charge of the pair’s direction, we could see AUD/USD breaking the 0.6650 (R1) line and aim for the 0.6750 (R2) level. If the bears take over, we could see the pair breaking the prementioned upward trendline, the 0.6565 (S1) line and aim for the 0.6490 (S2) level.

The common currency got some support yesterday as the EU announced a potential €750 billion stimulus plan on which the €500 billion are to be given as grants while the rest as loans, yet some northern countries seem to be negative to the plan. At the same time, Merkel’s government is said to prepare its own “shock and awe” measures to put the German economy back on track. On the monetary front, ECB President Lagarde stated that Eurozone economy’s performance is worse than expected and the ECB is now expecting GDP to contract by 8-12%, which may have been one of the bank’s worst scenarios. We could see EUR traders being quite busy today and tomorrow as financial releases are to gauge the economy’s performance and sentiment. At a more fundamental level, expectations for Germany’s stimulus could raise hopes among EUR traders, while any disagreements about the EU Commission’s stimulus from member states tend to curb such hopes. EUR/USD rose yesterday breaking above the 1.1010 (S1) resistance line, now turned to support, and maintained its position hovering above it for the Asian session. We maintain a bullish outlook for the pair as it seems to be guided by the upward trendline incepted since the 26th of May. In a buying momentum, we could see the pair breaking the 1.1060 (R1) line and aim for higher grounds. While if the selling interest prevails the market, the pair could break the 1.1010 (S1) line and aim for the 1.0950 (S2) level.

In a busy Thursday, in the European session, we get Eurozone’s business climate and economic sentiment for May as well as Germany’s preliminary HICP rate for May. In the American session, we get from the US, the durable goods rates for April, the 2nd estimate of the GDP rate for Q1, the latest initial jobless claims figure and the EIA crude oil inventories figure for the week ended. During Friday’s Asian session, we get a slew of data from Japan, among which we highlight Tokyo’s CPI rates for May as well as the preliminary output growth rate for April and the retail sales growth rate for the same month. As for speakers, please note that NY Fed President Williams and Philadelphia Fed President Harker are scheduled to speak today. 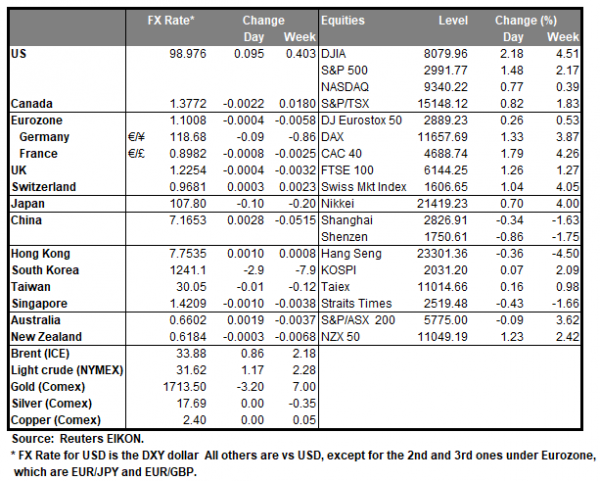 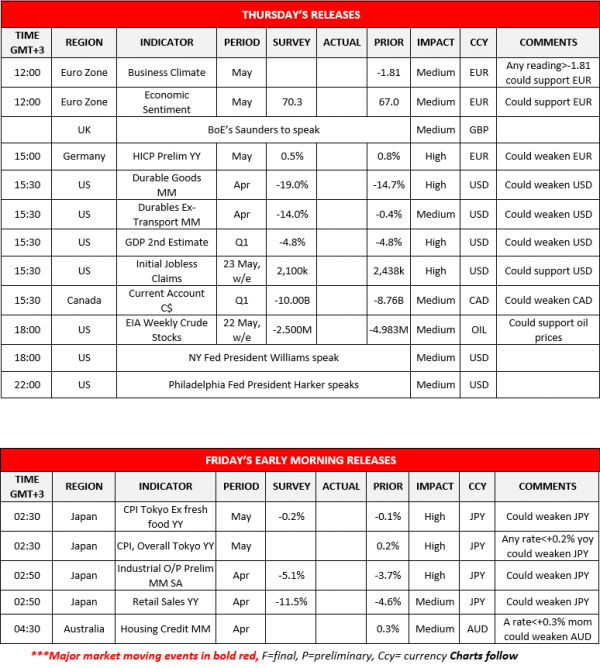