The USD weakened somewhat against its counterparts yesterday, as the markets await the US response to China. The Chinese Parliament approved the new security law for Hong Kong despite US warnings, and the legislation is now passed to China’s Senior leadership. The legislation caused wide concerns for the semiautonomous status of Hong Kong, as China would be able to install its own security agencies in the city. In the meantime, protests are ongoing in Hong Kong and security measures around Hong Kong’s parliament remain tight. US President Trump stated that he will be holding a press conference on Friday about the issue and the US response to China. It should be noted that US Secretary of State Mike Pompeo had already stated that Hong Kong could no longer be considered to have “a high degree of autonomy” from mainland China. Such a switch in Hong Kong’s status could entail that US sanctions and tariffs that apply to mainland China could now also apply to Hong Kong, destabilizing its economy and its function as a financial hub. We expect the situation to escalate further substantially and in such a case the USD may get some safe-haven inflows. AUD/USD continued to rise yesterday testing the 0.6650 (R1) resistance line. We maintain a bullish outlook for the pair, as long as it remains above the upward trendline incepted since the 15th of May. On the other hand, it should be noted that he 0.6650 (R1) line seems to be providing considerable resistance. Should the bulls actually remain in charge of the pair’s direction, we could see AUD/USD clearly breaking the 0.6650 (R1) line and aim for the 0.6750 (R2) level. If the bears take over, we could see the pair breaking the prementioned upward trendline, the 0.6565 (S1) line and aim for the 0.6490 (S2) level.

EUR jumped yesterday against the USD as traders ignored the slowdown of Germany’s HICP rate for May and provided support for the common currency. A reason behind EUR’s strengthening could be the German government’s intentions for an additional stimulus of €50-100 billion for the German economy. Finance minister Scholz seems to be leaning towards the higher end of spending, while the conservative block within the German government seems to be pushing back in order to avoid debt and more concrete decisions are to be taken next week. Analysts note that the first stimulus from Germany’s government was to soften the blow to the German economy, while the second is to boost its recovery. We expect EUR traders to keep a close eye to today’s financial releases and especially Eurozone’s preliminary HICP rate for May. EUR/USD jumped yesterday breaking the 1.1050 (S1) resistance line, now turned to support. We maintain a bullish outlook for the pair as it seems to be guided by the upward trendline incepted since the 26th of May. At the same time please note that the RSI indicator below our chart is at the reading of 70, mirroring the strength of the bulls, yet at the same time may be implying that the pair’s long position may be somewhat overcrowded. In a buying momentum, we could see the pair breaking the 1.1120 (R1) line and aim for the 1.1180 (R2) resistance level. While if a selling interest prevails in the market, the pair could break the 1.1060 (S1) line and aim for the 1.1010 (S2) level.

In a busy Friday, during the European session, we get Germany’s retail sales growth rate for April as well as France’s and Eurozone’s preliminary HICP rates for May. In the American session, we get the US consumption rate for April and Canada’s GDP rates for Q1 and March. On Sunday’s Asian morning, we get China’s NBS PMI’s for May while on Monday’s Asian session, Japan’s final Jibun Mfg PMI for May and China’s Caixin manufacturing PMI for May are to be released. As for speakers, please note that Riksbank’s Governor Stefan Ingves yet the eyes of the market are expected to be on Fed Chairman Jerome Powell’s speech later on. 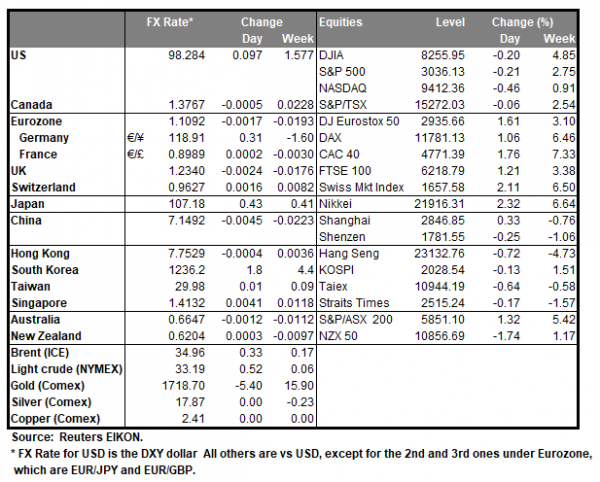 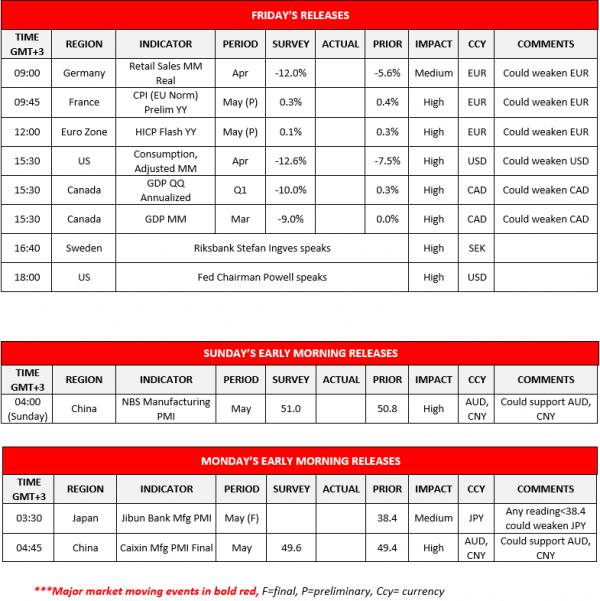