On the macro front, Euro-zone consumer price inflation slowed to 0.1% on yearly basis in May, marking its lowest level since 2016 and compared to a level of 0.3% in the previous month. Separately, Germany’s retail sales dropped 5.3% on a monthly basis in April, recording its biggest fall since 2007 and less than market expectations for a drop of 12.0%. In the previous month, retail sales had recorded a fall of 4.0%.

In the US, personal income unexpectedly rose 10.5% on monthly basis in April, defying market expectations for a drop of 6.5% and compared to a revised decline of 2.2% in the prior month. Moreover, the Michigan consumer sentiment index climbed to 72.3 in May and compared to a reading of 71.8. The preliminary figures had recorded an advance to 73.7. On the other hand, personal spending dropped 13.6% in April, more than market expectations for a fall of 12.6%. In the prior month, personal spending had recorded a revised drop of 6.9%. Additionally, goods trade deficit widened to $69.7 billion in April, compared to a revised deficit of $65.0 billion in March. Moreover, the Chicago Purchasing Managers’ Index unexpectedly fell to 32.3 in May, recording its lowest level since 1982 and defying market expectations for a rise to a level of 40.0 and compared to a reading of 35.4 in the previous month.

In a webinar hosted by Princeton University, Federal Reserve Chairman, Jerome Powell, stated that the coronavirus pandemic is affecting low-wage workers and women the most and accelerating inequality in America. Also, he cautioned that the second wave would undermine public confidence and might make for a significantly longer and weaker recovery. Moreover, Powell reiterated his pledge to keep monetary policy loose and suggested the Fed would stay the course for now. 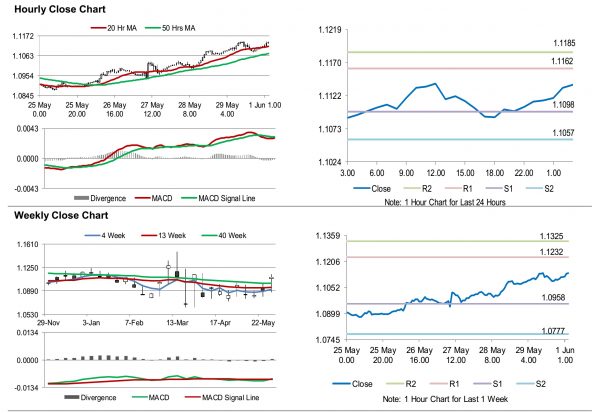 Euro Reverses Its Gains In The Morning Session