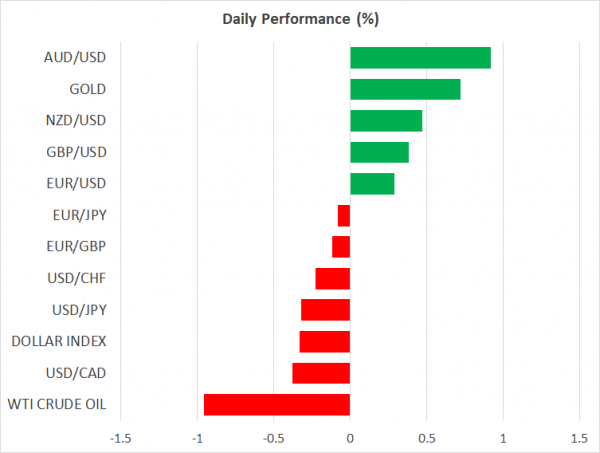 Widespread relief in financial markets that President Trump stopped short of announcing damaging sanctions on China buoyed risk assets on the first trading day of June. While the US is still planning on stripping Hong Kong of its special status, Trump’s announcement on Friday was short on details, leading investors to believe that any future action will be measured and proportionate.

More importantly, Trump steered clear of threatening to tear up his much prized ‘phase one’ trade deal in his latest dispute with Beijing, easing fears of a major flare up in US-China tensions.

Stocks were back on the front foot, with shares in Hong Kong surging by 3.4% and Chinese indices closing more than 2% higher on Monday. European stocks also opened sharply higher, though US futures pointed to more moderate gains on Wall Street.

In the FX world, safe haven favourites, the yen, Swiss franc and the US dollar all slipped as risk appetite recovered from Friday’s blip. The dollar index slumped to a fresh 2½-month low as the euro and pound extended their rebounds.

But the biggest gainer on Monday was the Australian dollar, which surged to a near 4-month high on the back of the ebb in Sino-US frictions, while a surprise expansion in Chinese manufacturing activity in May, according to the Caixin/Markit PMI, further boosted the currency. Moreover, growing expectations that the Reserve Bank of Australia is done with monetary easing and won’t signal otherwise at its policy meeting tomorrow has been further underscoring the aussie’s emerging bullish pattern.

Riots rage across the US, lifting gold

But as markets cheer Trump’s muted response to China’s tightening grip over the autonomous territory of Hong Kong, investors may be underestimating the likelihood of more severe measures in the future. For now, the limited sanctions such as visa restrictions on Chinese officials do not appear to have frightened anyone, but that does not mean more punitive action is not on the cards should China continue to provoke Washington.

In addition, mass protests are spreading across US cities over the racist killing of a black person by a police officer last week. With the unrest getting worse and turning violent, there’s a growing fear that the riots and looting will not only hamper businesses’ efforts to return to normality after weeks of shutdowns, but the large crowd gatherings will cause a spike in coronavirus cases just as they are starting to come down.

All this kept gold in demand, with the precious metal gaining 0.7%, despite the broader risk-on mood in the markets.

Also defying gravity on Monday was the pound, which added 0.6% against the greenback even as the latest round of Brexit talks that are due to start tomorrow appear to be headed nowhere. With British and EU negotiators blaming each other for the lack of progress as the clock ticks for the end of June deadline to extend the transition period, traders may be focusing on the reports that the UK will launch a new fiscal stimulus package in July. Britain’s slower exit from the lockdown than other countries means the recovery may also be slower, hence the need for additional fiscal support.

The euro has been enjoying its own stimulus boost following the EU’s proposal for a €750 billion virus relief fund and more is likely to be on the way as the European Central Bank is expected to increase its pandemic emergency purchase program when it meets on Thursday. However, with the ECB’s unconventional policies facing criticism in some Eurozone countries, there is room for disappointment if the stimulus program isn’t scaled up by as much as being anticipated.

Investors will also be keeping an eye on the latest nonfarm payrolls report out of the United States at the end of the week to see how the labour market benefited from the relaxation of the lockdown restrictions. 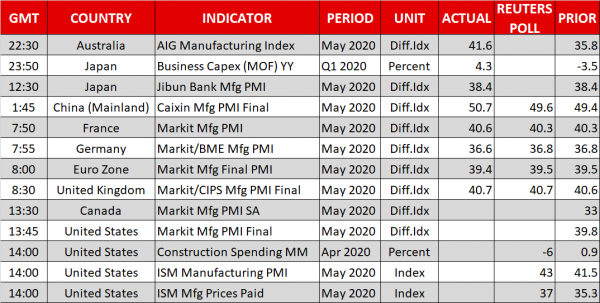