U.S. – America Starts Getting Back to Work Sooner than Expected

Before the release of the payrolls report this morning, economic and financial news this week had generally taken second stage to mass demonstrations throughout the country. While noble in their cause and peaceful in their core, the demonstrations were unfortunately followed by violence, destruction and looting. The unrest, which will add to the woes for many businesses that were already struggling due the pandemic, appeared to have dissipated by the end of the week.

On the external front, U.S-China relations also showed signs of friction. After the U.S. announced a host of measures against Beijing last Friday, this week, it was reported that state-controlled Chinese companies had cancelled several shipments of U.S. farm products. The airline industry marked another flare up. The U.S. threatened to bar Chinese passenger flights into the country, though it later scrapped this plan. These developments warrant attention, because, as recent history has shown, they can pose a major downside risk to the outlook.

Investors appeared to shrug off the dour news, focusing instead on the reopening of the economy and nascent signs of growth. Economic data offered some support to this narrative. After a major deterioration in April, both of the ISM indices improved in May, with the weightier non-manufacturing index coming in better than expected. Despite the uptick, both indices are still in contractionary territory (Chart 1). U.S. vehicles sales echoed a similar message, coming in a bit better than expected (up nearly 40% m/m), though at 12.2 million the level of sales remains well below pre-pandemic levels.

The highlight of the week was the payrolls report. While weekly jobless claims data pointed to a rise in unemployment, the May report showed an impressive gain of 2.5 million jobs, blowing expectations out of the water (Chart 2). The improvement was due entirely to a decline in the number of workers on temporary layoff, which fell by a nearly equal amount (-2.7 million) as Americans were called back to work. Most sectors recorded an improvement in May. The hard-hit leisure and hospitality sector (+1.2 million) accounted for about half of total job gains.

As employment rose, the unemployment rate fell to 13.3% from 14.7% the month prior. That said, this headline rate still undercounts some of the damage caused by COVID-19. For instance, had the labor force remained unchanged from its February level, the unemployment rate would have been 16.8%. With states poised to continue reopening their economies, the labor market is expected to gain further ground.

All in all, this week’s data indicate that the worst of the pandemic’s shock may be behind us. But with the path forward still contingent on that of the virus, we’re not quite out of the woods just yet. . 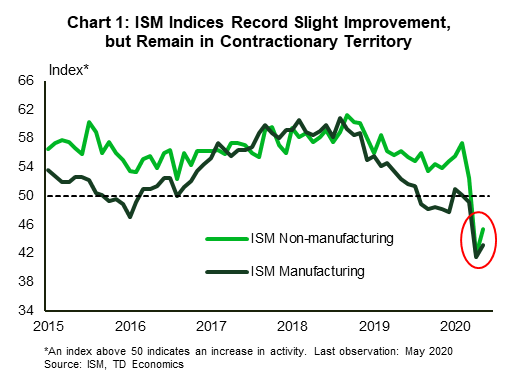 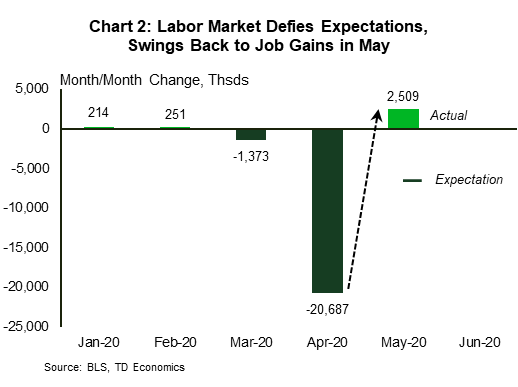 Financial markets started the week on strong footing and with a consensus busting jobs report on Friday, ended it even stronger. The S&P/TSX composite was up 4% compared to last week as of writing. The index is now 41% higher than the lows seen in late-March.

Oil prices continued their upward momentum early this week on the back of easing global lockdowns and historical production cuts. The momentum hit a roadblock on Thursday with the cancellation of a last-minute ‘special’ OPEC+ meeting. However, prices are still 10% higher, compared to last week.

The Bank of Canada’s (BoC) new Governor, Tiff Macklem, had a pretty smooth first week at work. Not surprisingly, the BoC left the overnight rate unchanged at 0.25%. The Bank’s statement expressed optimism, stating that pandemic related disruptions had peaked, but also acknowledged the uncertain future that lies ahead. Easing financial conditions have prompted the BoC to reduce the frequency of both its term repo and Banker Acceptance purchases from weekly to bi-weekly.

Meanwhile, the Canada Mortgage and Housing Corporation (CMHC) took several steps this week to tighten mortgage qualification rules. Home buyers will need higher credit scores and lower debt burdens to qualify for mortgage insurance. While we understand the rationale behind CMHC’s decision, it comes at an awkward time. Macroprudential authorities usually do not restrict access to credit at a time when the economy is weak. The measures could tighten financial conditions, slowing economic activity.

In terms of economic data, the Canadian trade deficit more than doubled in April ($3.3 billion) compared to the previous month ($1.5 billion). Both exports (-29.7%) and imports (-25.1%) registered their largest monthly declines on record. The auto and energy sectors were responsible for most of the pullback. The services sector also saw a decline in exports (-20.5%) and imports (-30.7%), with travel and transportation services contributing most heavily. As Canada and the world ease lockdowns, we expect things to get better. However, weak demand and businesses not yet operating at full capacity means the improvement in trade statistics will be gradual and uneven.

But without a doubt the biggest story on the economic front this week was the Labour Force Survey. Employment numbers beat all expectations, with a 290k jobs gain in May (consensus was a further 500k drop). These gains represent about 10% of the jobs lost since lockdowns were imposed. The labour force, meanwhile, recovered about 30% of its prior losses (+491k) as people once again started looking for work. This contributed to the unemployment rate edging up to 13.7% (13% in April). However, when including the group who wanted to work, but were still not looking for it (without distinguishing how recently they last worked) the unemployment rate was 19.6% (Chart 1). While the labour market has indeed strengthened compared to April, it remains considerably weak compared to the same period last year (Chart 2). There is a light at the end of the tunnel, but its still a long way off. 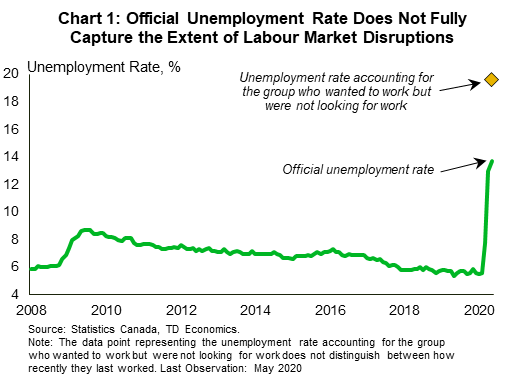 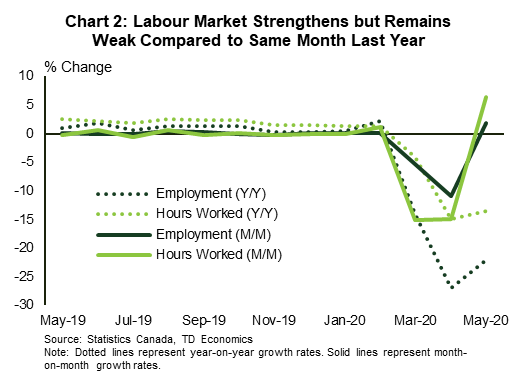 We don’t expect any majornew policy announcements, including on forward guidance for the funds rate or QE, but the tone will almost certainly remain quite dovish, with no let-up in easing through balance sheet expansion. In addition, we expect the chairman to start prepping markets for the adoption of forward guidance tied to a minimum for inflation in the context of average inflation targeting. Adding to the dovishness, updated projections will probably show inflation falling further below 2%, and the funds rate pinned near 0%, through at least 2022. 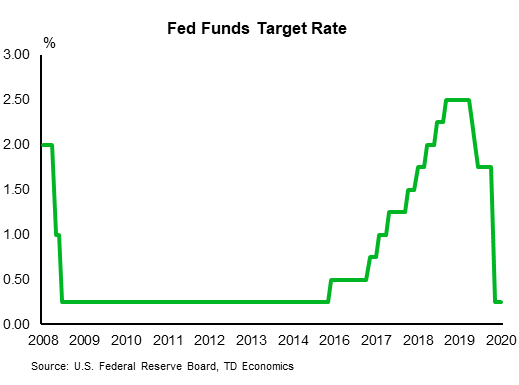 Inflation likely remained weak in May, but not nearly as weak as in March and April, when core as well as energy prices were deflation-like. We forecast both core and headline CPI to have advanced a modest 0.1% m/m. The travel parts, which plunged in March and April, probably stabilized. That said, we expect increased slack to keep inflation below the Fed’s 2% objective for many years. Our forecast implies y/y readings of 0.3%/1.4% for overall/core prices. 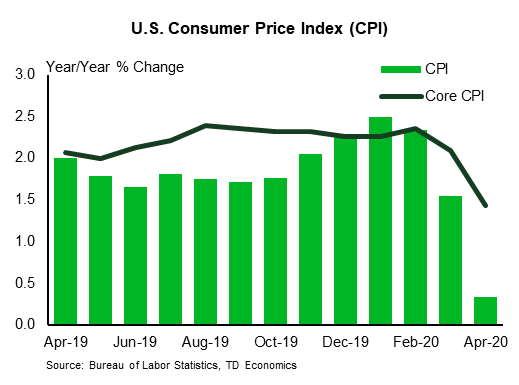 TD looks for housing starts to drift higher to a 180k annualized pace in May, helped by the resumption of residential construction activity in Quebec. Housing starts outside Quebec rose by 10.8% m/m in April despite widespread shutdowns across much of the country, and while we do not expect this to be sustained given a pullback in permit issuance, Quebec should more than offset this decline after construction workers were allowed back to jobsites on April 20th. Annualized starts in the province were trending near 50k in March, and the province added back 58k construction jobs in May. 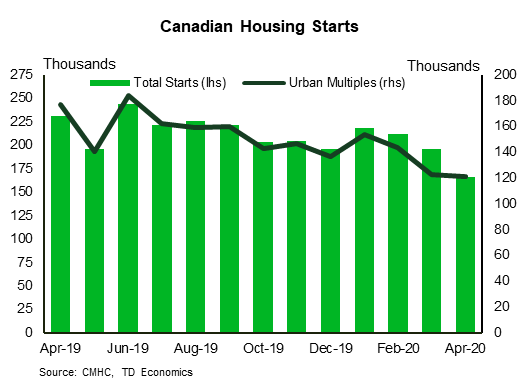