July flash inflation numbers, as well as the June unemployment rate for the eurozone were released today. The positive surprise in core inflation, in conjunction with the fall in the unemployment rate, led to the euro recording gains relative to major currencies.

Looking at today’s figures, the July flash inflation rate stood at 1.3% on an annual basis, as expected. This also coincided with the prior month’s figure. Rising energy prices contributed the most to inflationary pressures during July. The respective number for core inflation, the measure that excludes volatile unprocessed food and energy items, was released at 1.3% year-on-year as well, outstripping expectations for 1.1% growth and coming in above June’s 1.2%. This constitutes a four-year high for the measure that is often cited by the European Central Bank in its policy making.

Turning to June’s unemployment rate, it edged down to 9.1%, its lowest since 2009, from May’s downwardly revised 9.2% (from 9.3% before). Analysts’ projections were for a reading of 9.2%. This multi-year low reaffirms that euro area economies remain within a path of stronger growth. Adding to this, Germany saw its unemployment rate falling to 3.8% from 3.9% in May. This raises hopes that the eurozone’s largest economy will experience more significant wage rises leading to positive contagious effects for the entire euro area.

Regarding reaction in the forex markets, the euro advanced on the news relative to the dollar as euro/dollar rose to as high as 1.1744 within the first few minutes of data release. The pair previously traded at 1.1731. Euro/pound also gained, rising to the intra-day high of 0.8961 from 0.8953 before the numbers went public. Gains relative to both currencies were not sustained, though it is worthy of mention that the common currency has considerably advanced versus the US and British currencies since the start of the year. Year-to-date, euro/dollar is up 11.6% and euro/pound up 5.0%.

During its last meeting on July 20, the ECB maintained its accommodative monetary policy stance with Mario Draghi, the central bank’s President, emphasizing the need to be patient in terms of policy normalization. Today’s upbeat figures are sure to add to speculation that the ECB will soon start removing accommodation or at least more actively talk about such a shift in policy. The Bank next meets on September 7. 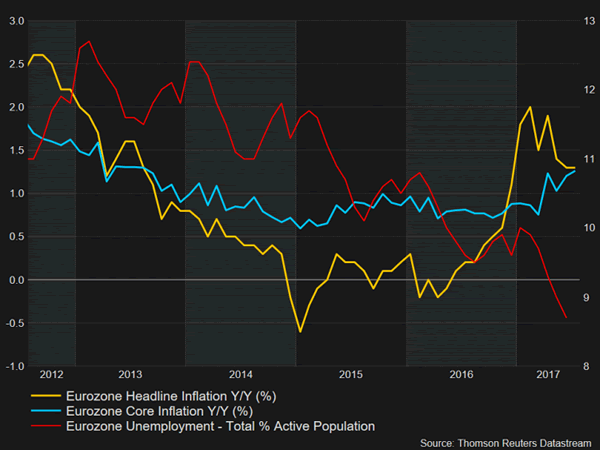