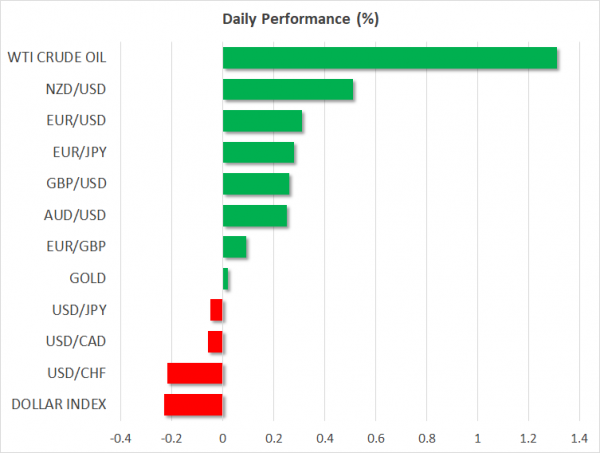 Markets were mostly in risk-on mode on Thursday as the combination of positive economic indicators and potential coronavirus vaccines kept alive hopes of a strong recovery from the pandemic. But with US markets closed on Friday for Independence Day celebrations, the early release of the all-important nonfarm payrolls report could easily upset the fragile risk appetite, setting the tone for the next few days.

The US economy likely added 3 million jobs in June, which would bring down the unemployment rate to 12.3% and reinforce the view that the recovery is so far looking V-shaped. Other US data released in the past week have been mostly positive, including the ISM manufacturing PMI yesterday that rose above the 50 expansionary level in June for the first time in 4 months.

However, the jobs numbers are becoming increasingly hard to predict during the pandemic and forecasts range from 9 million jobs to just 405,000. The ADP employment report has already provided a glimpse as to what to expect and it surprised significantly to the downside (2.37 million vs 3 million). A big miss should therefore not be ruled out, especially when considering that June is when several states began to pause the reopening of their economies amid a flare-up in virus cases across the United States.

The question is, which way will the US dollar go if the NFP figures suggest the recovery is in trouble? So far, the greenback has been acting as a safe haven, rising even on weak domestic data. But what if the recovery remains on track in the rest of the world with only America at significant risk of further shutdowns? Today’s job report could be the unravelling of the dollar’s safe-haven status.

Ahead of those numbers, the greenback slid against a basket of currencies, with its index testing the 97 level. The yen also lost ground against its major peers, but gold suffered the biggest pullback. The precious metal last stood at $1,7648/oz, having yesterday scaled a 7½-year peak of $1,788.96/oz.

Expectations that the mega stimulus packages unleashed by governments and central banks around the world will protect economies from the virus hit continue to overpower growing fears of a second wave and warnings of a slow recovery. Moreover, markets are still pricing in a vaccine becoming available in 2021 and the regular news flow of positive early trial results is giving investors no reason to revise their predictions.

The latest vaccine headline comes from Pfizer, whose early stage results show enough antibodies being produced to successfully neutralize the virus in patients. While it’s too early to judge whether the vaccine is safe, the news was enough to lift the Nasdaq Composite to a record closing high on Wednesday.

Asian and European shares joined in the rally, climbing higher today, though most indices remain confined to their recent ranges. Chinese stocks were the exception, which soared on the announcement of a multi-trillion-yuan fiscal stimulus by the government, sending the blue-chip CSI-300 index to the highest in 2½ years.

The gains come despite worsening relations between China and the US over Hong Kong and human rights abuses. Markets currently don’t see the ‘phase one’ deal being at risk from the increased tensions as the nature of the tit-for-tat measures the two sides are taking in response indicates they are trying to keep the trade deal a separate issue, and this is supportive of risk on.

Elsewhere in the currency markets, the euro and pound edged higher, benefiting from a wavering dollar. The New Zealand dollar was the best performer, rising 0.5% versus its US counterpart, while the Canadian dollar underperformed. Worries are mounting about the US economy amid the resurgence if new virus cases, with the daily count hitting another record on Wednesday, and this is weighing on the loonie given Canada’s dependence on trade with its southern neighbour.

Australia and Tokyo have also reported a spike in new cases in recent days, keeping the risk of a second virus wave very real. 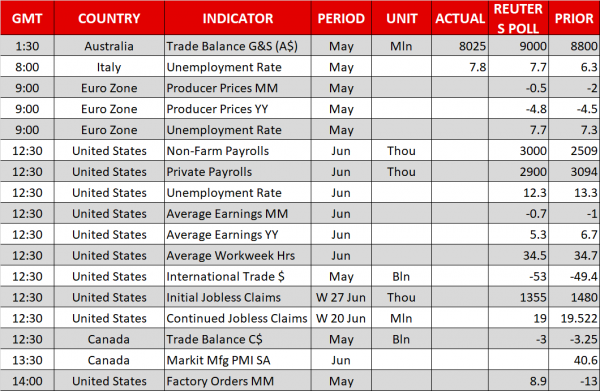