The June non-farm payrolls report will be released later at the usual time of 13:30 BST but obviously a day earlier than normal because of Independence Day falling on the weekend. It is expected to reveal that 3.04 million jobs have been added on the month, following a surprise 2.51m jump the month before. The unemployment rate is expected to have fallen to 12.4% from 13.3% previously.

The key question is whether the jobs report will match those expectations given how the US economy has struggled to re-open with virus infections spiking in several States last month. Are analysts being unreasonably too optimistic? The other key question for FX, gold and stock traders is how the markets will react to data.

Bizarrely, we have seen the US dollar respond negatively to positive US data surprises of late. The greenback has become very sensitive to the “risk-on, risk-off” trade during the pandemic. With lockdown measures easing and hopes over an effective vaccine for covid-19 rising, investors have largely ignored the continued increases in infection rates, keeping stocks supported and the dollar undermined. Sentiment towards risk-sensitive assets have also been boosted by ongoing support by governments and central banks. These factors and the Fed’s re-introduction of QE have helped to depress US bond yields, effectively turning the dollar as a funding currency. As result, the US currency has fallen sharply against risk-sensitive commodity dollars such as the Aussie and kiwi. However, against the yen, the dollar has risen slightly. This is because bond yields in the US have turned relatively lower than the in Japan, because of the Fed’s actions being bolder than those of the BoJ in response to the pandemic.

So, right now, good data means “risk on,” which in turn means it is good news for risk-sensitive currencies and other assets like the commodity dollars and stock markets.

The UJ will be very sensitive to the outcome of NFP. A big beat should send it higher regardless of what other dollar pairs may do, while a big disappointment should have the opposite effect, as mentioned above. 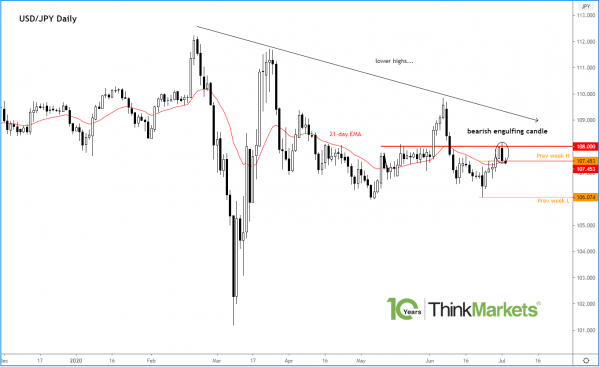 Given that the USD/JPY has been creating lower highs and lower lows since the height of the pandemic, the trend is clearly bearish for this pair. In fact, on Wednesday, the UJ created a bearish engulfing candle on the daily chart, suggesting the corrective bounce is over. So, what the UJ bears don’t want to see today is a big beat on the jobs front.

Regardless of how the dollar will respond to today’s jobs report, I think it will weaken a little more over the coming weeks, but then potentially rise back given the risks that the global economic recovery may not be strong as hoped for by the markets. If this turns out to be the case, then it may undermine commodity dollars and boost the appeal of the greenback as investors reduce or even reverse their “risk-on” trades. In other words, a lot will depend on incoming data over the next several weeks, and today’s jobs report alone will not be a game changer.