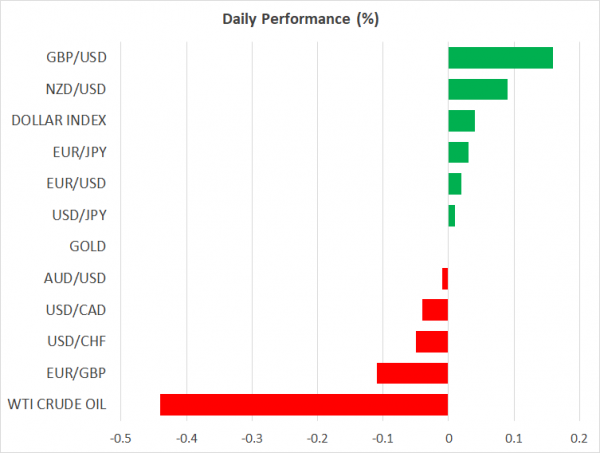 News flow was rather limited on Wednesday, helping global markets to stay in a good mood since ‘no news is good news’ these days, with such tremendous liquidity flowing through the financial system. New US virus cases remained alarmingly high, and most worrisome of all, the death rate seems to be spiking too. Yet, investors looked past that, focusing instead on some ‘encouraging’ details, like Florida and Arizona reporting increases below their weekly averages.

In other words, markets are staying optimistic but a little cautious at the same time, as the battle between stimulus-powered bulls and virus-fearing bears rages on. In this uncertain and shifting environment, investors are sticking to the classic pandemic playbook: buy mega-cap tech shares that can perform even if the recovery falters and hedge some risk by piling into havens like gold, since bonds are no longer attractive.

Indeed, the tech-heavy Nasdaq (+1.4%) hit another all-time high yesterday, propelled higher by the likes of Amazon (+2.7%) and Apple (+2.3%) claiming new records of their own, while gold climbed above the $1800/ounce region for the first time since 2011.

Dollar sinks, everything else levitates

Gold’s advance was also aided by a softer US dollar, which tanked amid the broader ‘risk on’ atmosphere as investors rotated out of the reserve currency’s safety. What’s striking is that the dollar and gold seem to have switched roles in this crisis, with the greenback transforming into a haven that’s essentially a mirror reflection of stock markets, while gold has turned ‘risk neutral’, having almost no correlation to equities lately.

Beyond boosting gold, the sinking dollar helped to lift all other FX boats, with the pound and loonie capitalizing the most, after both the British and the Canadian governments unveiled fresh stimulus plans. In the UK, Chancellor Sunak announced that another GBP 30bn will be funneled to employers, homebuyers, and the hospitality industry, while Canada said the government deficit this year will widen to almost 20% of GDP to finance all the aid packages.

The loonie has lagged other commodity currencies like the aussie and kiwi throughout this recovery despite soaring oil prices, perhaps due to concerns around the US economy that Canada is inexorably tied to. Yet, this underperformance implies that once the US virus situation is brought back under control, the loonie may have greater scope to strengthen, something also supported by CFTC positioning data that show large speculators are still net short.

Weekly jobless claims and Lighthizer speech on the agenda

Taking a step back, for all the headlines in recent weeks, stock markets have not done much since the Fed’s balance sheet stopped expanding three weeks ago, and that’s reflected in virtually every FX chart that has the dollar on either side.

That said, most charts are now near the ‘optimistic’ bounds of their latest ranges, with the S&P 500 hovering near its recent highs and the dollar near recent lows, so the next few sessions could be crucial, technically speaking.

As for today, the weekly US jobless claims will be watched closely as they will reveal the initial impact of the re-closures in California, Texas, Florida, and Arizona on the jobs market. Separately, a speech by the top US trade official – Robert Lighthizer – at 17:00 GMT will also be in focus. 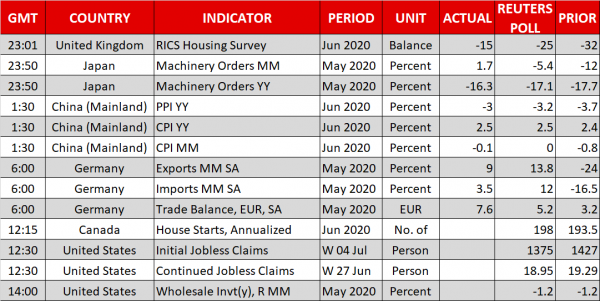 NFP Preview: Will the Jobs Report Save the US Dollar?

US Jobs Picture Stabilizing with Renewed Drop in Claims