The USD gained some ground on Friday against most of its counterparts implying a possible reversal of the losing trend of the past few weeks, yet its gains seemed to remain capped during todays’ Asian session. We tend to remain skeptical over a possible surge of the USD as the fundamentals surrounding it tend to remain bleak and point towards the other direction. Especially the worries for the recovery of the US economy seem to remain strong and given that according to media, White House officials are not optimistic on reaching a deal to fiscally boost the US economy, worries may intensify. We tend to regard a possible deal for a US fiscal stimulus as of the essence for the direction of the USD, however also financial releases are to play a role. USD/JPY rose substantially on Friday breaking the 105.30 (S1) resistance line, now turned to support, and continued higher, yet during today’s Asian session corrected a bit lower. Some stabilisation seems to be playing out for the pair at the current moment, yet market sentiment and US financial releases could play a role in the pair’s direction. Should the pair find fresh buying orders along its path, we could see it breaking the 106.60 (R1) line and aim for the 107.75 (R2) resistance level. Should a selling interest be displayed by the market, we could see the pair breaking the 105.30 (S1) support line and aim for the 104.10 (S2) level.

Tomorrow in the late Asian session, RBA (04:30,GMT) is expected to release its interest rate decision and is widely expected to remain on hold at +0.25%, while AUD OIS imply a probability of 98.72% for such a scenario. Should the bank remain on hold as expected we could see the market’s attention turning to the accompanying statement especially for any views of the bank on the country’s economic outlook, given the reintroduction of lock down measures in Melbourne. It should be mentioned that RBA Assistant Governor Chris Kent stated that negative rates were not an option for the bank, while RBA seems prepared to scale up operations should it be needed. We expect the bank to sound more dovish, given the recent adverse financial releases, which could have a bearish effect on the AUD.
AUD/USD dropped during Friday, breaking the upward trendline incepted since the 14th of July. As the pair’s price action clearly broke the prementioned trendline, we switch our bullish outlook in favour of a sideways motion initially. Should the bears take over, we could see AUD/USD breaking the 0.7100 (S1) support line and aim for the 0.7025 (S2) level. On the flip side, should the bulls dominate, we could see the pair breaking the 0.7200 (R1) resistance line and aim for the 0.7300 (R2) level.

Today in the European session, we highlight Germany’s and UK’s final Manufacturing PMIs for July and in the American session the US ISM manufacturing PMI for July. During tomorrow’s Asian session, before the RBA interest rate decision we get Australia’s retail sales growth rate and trade data for June.

On Tuesday, we get from Australia the trade balance and the retail sales growth rate both for June while also from Australia we get RBA’s interest rate decision and in the American session, we get Canada’s Markit manufacturing PMI for July and from the US the factory orders growth rate for June. On Wednesday, we get New Zealand’s employment data for Q2, China’s Caixin Services PMI for July, UK’s and France’s Services PMI, Canada’s trade balance for June and the US ISM non-manufacturing PMI for July. On Thursday, Germany’s industrial orders growth rate for June, BoE’s interest rate decision, the weekly US initial jobless claims figure and the from the Czech Republic, CNB’s interest rate decision, are due out. On Friday, we get China’s trade balance for July, Germanys’ industrial output growth rate for June, UK’s Halifax house prices, the US employment report with its NFP figure for July and Canada’s employment data also for July. 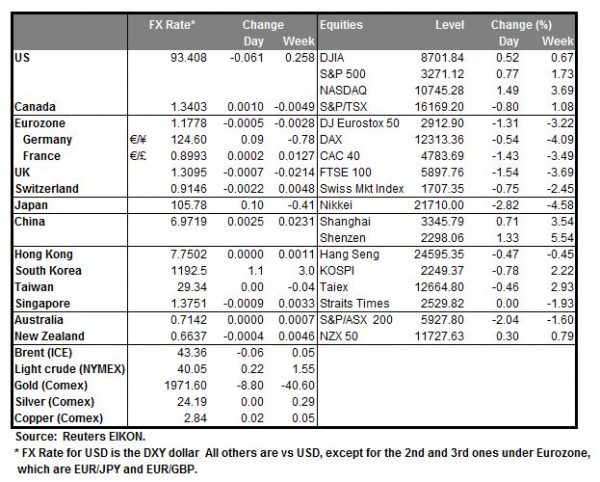 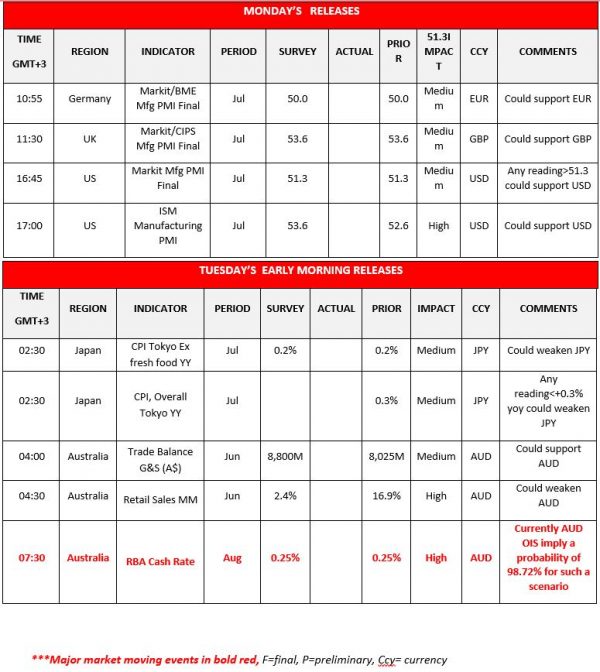