Eurozone Economy Shuts Down in Q2

The negative effects of COVID-19 for Europe’s economy have been apparent for some time, and last week’s GDP figures confirmed a historic collapse in the Eurozone economy. The initial estimate of Eurozone GDP showed a fall of 12.1% quarter-over-quarter in the second quarter, almost four times greater than the previous largest quarterly decline, while on an annual basis GDP was down 15% year-over-year. As historic as the Q2 slump was, it was in line with the consensus forecast, though a bit larger than the fall we had anticipated. 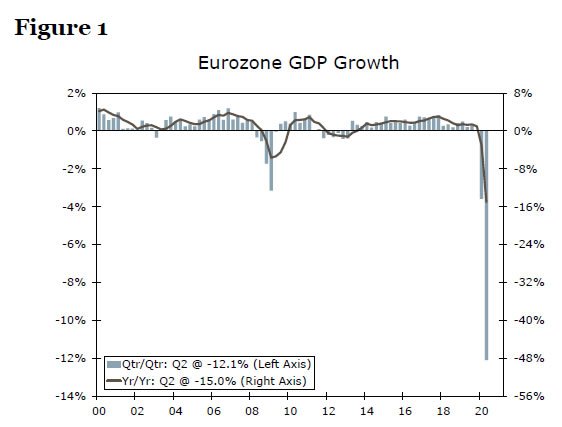 The underlying details of the release are limited, but the figures that are available show that economic weakness was widespread on a geographical basis. Among the region’s four largest economies, German GDP fell 10.1% quarter-over-quarter, while the quarter-over-quarter declines for France, Italy and Spain were even larger at 13.8%, 12.4% and 18.5%, respectively.

Eurozone Q3 GDP: What Goes Down Must Come Up

As dire as the Eurozone economy was in Q2, the more encouraging news is there appear to be signs of a reasonably rapid rebound toward the end of the second quarter and heading into Q3. In terms of hard activity data, a slump in Eurozone retail sales in March and April was followed by a 17.8% month-over-month jump in May. Moreover, available June national retail and consumer spending data for Germany, France, Italy and Spain point to another sizable gain during the final month of Q2. Based on the historical relationship (since 2000) between overall Eurozone retail sales and the national data for these four countries, we project Eurozone retail sales rose a further 7.2% month-over-month in June. If retail sales were to print in line with that projection, it would mean that the level of June sales would be 10% above average sales for Q2 as a whole, even before the third quarter begins. Separately, industrial activity is showing a perceptible recovery, with Eurozone industrial output up 12.4% month-over-month, albeit after large declines in March and April. 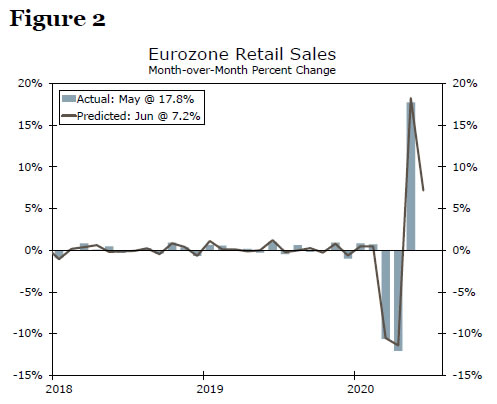 That momentum looks to have carried into Q3 based on survey data. In particular, the Eurozone manufacturing and services PMIs rose back above 50 in July, indicating a return to growth. The manufacturing PMI rose to 51.8, while the services PMI rose to 55.1—the highest reading for the services index since 2018. Altogether while Q2 GDP fell more than we expected, monthly indicators suggest Q3 GDP could rise more than the 6% quarter-over-quarter gain we currently forecast. 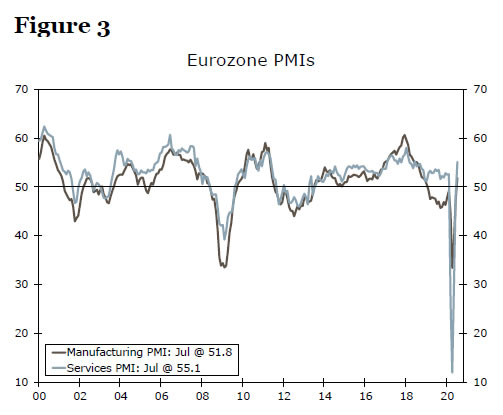 Reasons for Recovery to Persist

Following these early encouraging signs, we also see scope for the Eurozone’s recovery to continue based on the monetary and fiscal policy response, as well as the evolution of the COVID-19 virus. On the health front, Eurozone countries have made some progress in containing and diminishing the spread of COVID-19, trends which should allow the reopening of the economy to continue and activity growth to rise further. Even with some uptick in new COVID-19 cases in recent days, the average daily increase of almost 6,000 per day over the past week remains well below the peaks seen in late March. 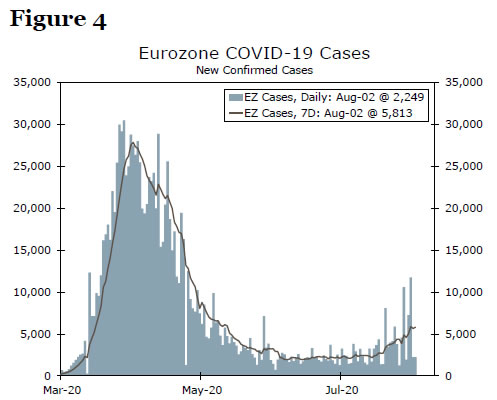 Meanwhile the monetary policy response to COVID-19 has been forceful, and the fiscal policy response has been more robust than expected. Eurozone markets are awash with liquidity as the European Central Bank, since the start of this year, announced a further €120B in public sector bond purchases, €1,350B in cumulative pandemic emergency bond purchases and made the terms on its targeted long-term lending programs more attractive. With respect to the latter, the June lending operation saw European banks take up €1,308B, which, once the repayment of prior loans are accounted for, contributed to a net €548B injection of liquidity. Overall, the ECB’s policy actions have so far seen its balance sheet (as a percentage of GDP) expand to 56% from 39% earlier this year. 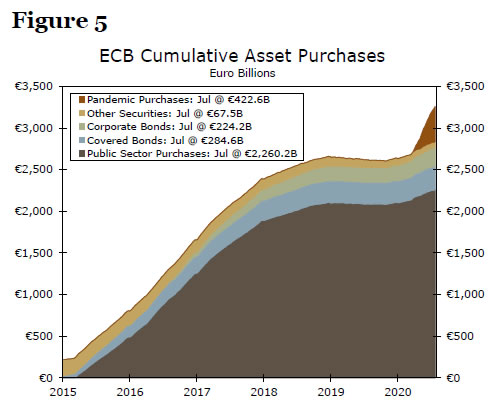 The ECB’s policy actions have had the important effect of contributing to stronger lending to nonfinancial corporates. Whether those firms are borrowing to support growth in business activity or as a liquidity buffer, given the uncertain environment, both motivations are arguably favorable for the longer-term Eurozone economic outlook. The ECB’s policy response has also helped to contain the region’s bond yields, though as we discuss below we believe fiscal policy has likely played a part in limiting yields as well. 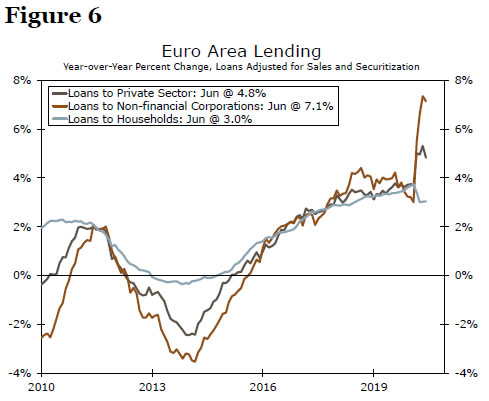 So far, the fiscal policy response has been quite pronounced by Europe’s historical standards (though admittedly, the economic downturn has been very pronounced by European standards). Estimates of fiscal stimulus vary, but we use calculations by Bruegel, a European economic think tank, of immediate fiscal stimulus (extra government spending and foregone revenues), while also incorporating the most recently announced stimulus measures. Using this approach, the nationallevel fiscal stimulus has so far been 13.3% of GDP for Germany, 4.4% for France, 4.8% for Italy and 3.7% for Spain.

In addition, the recently agreed €750B Eurozone rescue fund, comprising €390B in grants and €360B in loans, represents an important symbolic and operational step. Symbolically, it represents the first time the Eurozone countries have engaged in some form of joint borrowing obligations, a commitment that has boosted investor sentiment and support toward peripheral Eurozone bond markets enough to allow Italy to announce further national-level stimulus measures. Operationally, it is important in that €390B in grants, with some weighting toward countries like Italy and Spain, represents an extra 3.3% of Eurozone GDP, although those payments will be spread over three years.

Furthermore, another significant element during the current crisis is the interaction between Eurozone monetary and fiscal policy, which we believe has been, and will be, key in containing Eurozone bond yields. Specifically, assessing the supply of bonds from government issuance relative to demand for bonds from ECB bond purchases gives a sense of “net government bond supply” that needs to be absorbed by private investors. While more precise calculations are possible, this relative balance can be approximated by looking at the general government budget balance, compared to the ECB’s public sector and pandemic bond purchases. Local government bonds do fall within the range of securities eligible for ECB purchase, but so too do supranational bonds, meaning the general government deficit is only an approximation in calculating this supply/demand balance. In addition, other sources of financing are theoretically possible, including direct loans or running down cash balances, adding a further sense of approximation. Nonetheless, comparing the ECB’s various public sector bond purchases to the general government budget balance does offer some insight to the overall supply/demand balance for Eurozone government bonds. 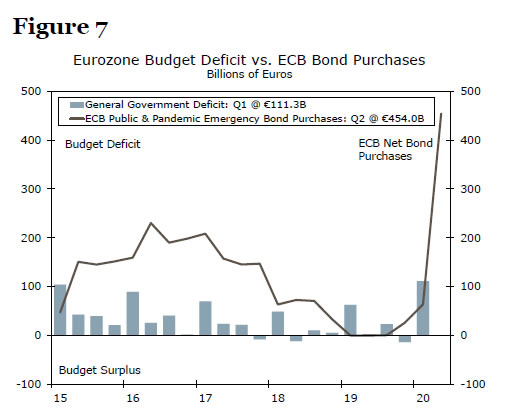 Of course, the relative bond supply and demand by an individual country is as important, or probably more important, than this Eurozone aggregate. Using lower frequency annual data, Figure 8 shows, for Germany, France, Italy and Spain, an approximation of net bond supply absorbed by private investors. This approximation is estimated as a country’s general government deficit less the ECB’s purchases for that country. In 2017, the ECB purchases comfortably covered the budget deficit for all four countries (in fact, Germany was running a budget surplus), meaning “net government bond supply” was negative. Only in 2018, when net bond supply was close to balance for France, Italy and Spain, and in 2019 when net bond supply was positive for these countries (that is, the ECB’s purchases did not cover the deficits for France, Italy and Spain) that peripheral Eurozone bond markets became less stable. 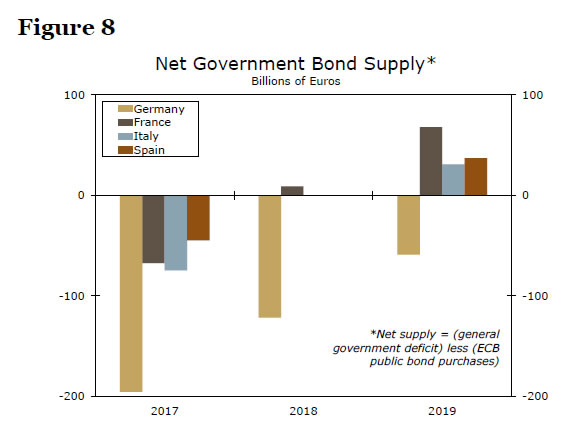 In that context, although budget deficits are expected to surge in 2020, increased ECB bond purchases will provide a significant offset. In fact, based on the IMF’s latest forecast for a Eurozone budget deficit of 11.7% of GDP this year, we project the ECB’s public and pandemic bond purchases will exceed the Eurozone-wide general government budget deficit in 2020. Moreover, extrapolating the recent pace and composition of the ECB’s public and pandemic purchases, we expect ECB purchases to broadly match, or exceed, government deficits in Spain and Italy, though ECB purchases might fall short of government deficits in Germany and France. The fact that the ECB’s accommodative policy stance should provide significant support to the arguably more vulnerable Italian and Spanish bond markets means we expect Eurozone bond markets to remain relatively stable in 2020.

Overall, given the encouraging early signs on the Eurozone economic rebound, progress in containing and diminishing the spread of COVID-19 as well as monetary and fiscal easing, which should help to cushion economic growth and stabilize markets, we remain constructive on Eurozone recovery prospects despite the large Q2 GDP decline. At this time, we are not inclined to make major changes to our forecast for a 7.7% contraction in 2020 Eurozone GDP, with faster growth in Q3 and Q4 helping to offset some of the large Q2 fall. Indeed, while it is too early to be definitive, at the current juncture we believe that Eurozone monetary and fiscal policy action might be enough for the region’s economy and financial markets to stabilize before recovering over time. That is, while we acknowledge further monetary and fiscal easing is possible, it is not currently part of our base case.

Euro Outlook Still Positive, but with Some Risks

The euro has risen sharply in recent in recent weeks, and given the more constructive future prospects for the Eurozone economy, we remain positive overall on the outlook for the euro. One interesting trend in recent months has been a shift in the composition of portfolio investment flows, with net equity flows firming, while net debt flows have softened. To the extent that equity investment might tend to be more on a currency-unhedged basis, it might explain some of the euro’s recent strength, which has some potential to continue. 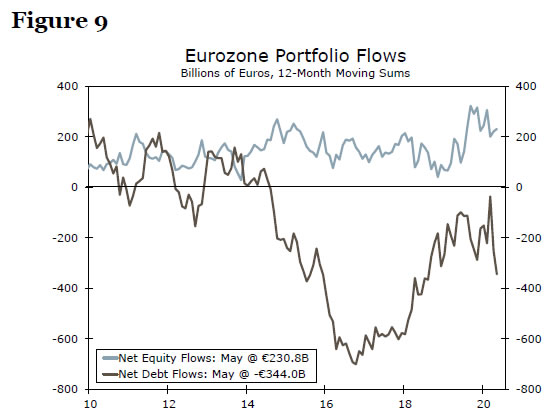 That said, while we believe the macroeconomic picture should be positive for the euro overall, we are cognizant that some risks remain. Most significantly, there has been a very large buildup in speculative euro positions to a record net long position by July, which suggests scope for corrective weakness.

Second, as we noted earlier, COVID-19 cases across the Eurozone have edged higher in recent days and weeks. Should that trend intensify, it could also weigh on the euro. Finally, it is not yet fully clear the precise extent to which governments’ fiscal actions will offset losses in household incomes and declines in consumer spending, an uncertainty that has some potential to restrain the euro for the time being. Despite these possible negative factors, we still expect the euro to strengthen gradually over the medium-term.