The USD’s resurgence seems to be taking a breather, as investors seem to worry about the new fiscal stimulus package brewed in Washington. On the flip side, it should be noted that US financial data yesterday tended to be mixed but encouraging, as the ISM manufacturing PMI outperformed market expectations indicating wider economic activity in the US manufacturing sector. Analysts tend to note that on the one hand the markets tend to weigh the better manufacturing data and strong equities markets, against the still wide, spreading of COVID 19 and the high degree of liquidity in the markets. The market still seems to be focused on the possibility of a new fiscal stimulus, yet negotiations in the US Congress look like they are stalling, with the sticking point seeming to be the $600 unemployment benefit. Chicago Fed’s President Charles Evans yesterday practically called for more U.S. government spending to support the economy in order to boost demand. We continue to expect that ultimately US lawmakers are going to reach a deal, which could provide substantial support to the USD, yet the timeframe and the actual size of the new stimulus package retains some degree of uncertainty. We tend to retain our worries about the USD though as the outlook for the US economy seems to remain uncertain at the current stage.

USD/CHF rose yesterday yet proved unable to clearly breach the 0.9200 (R1) resistance line. As the pair corrected lower breaking the upward trendline incepted since the 31st of July, we switch our bullish bias in favour of a sideways motion initially. Should the pair find fresh buying orders along its path, we could see it breaking the 0.9200 (R1) line and aim for the 0.9285 (R2) level. Should a selling interest be displayed by the market, we could see the pair breaking the 0.9105 (S1) support line and aim for the 0.9025 (S2) level.

As was widely expected RBA remained on hold, keeping rates unchanged at +0.25%, pushing the Aussie slightly higher. In his accompanying statement RBA Governor Lowe, stated that the Bank’s mid-March package of support for the Australian economy is working as expected. The bank also stated that the Australian economy is going through a difficult period, yet the downturn is not as severe as earlier expected and that the recovery is going to be uneven and bumpy, with the coronavirus outbreak in Victoria having a major effect on the Australian economy. The language of the statement seems less inclined towards a dovish tone, on the contrary, some confidence seems to be present which could boost the Aussie somewhat, yet the renewed lockdown measures in Victoria and global uncertainty could weigh on the commodity currency. We tend to highlight the headlines that Victoria plans to deploy military personnel and impose hefty fines to enforce COVID 19 isolation. Also note that Australia’s financial data today, sent mixed signals as the retail sales growth rate outperformed market expectations for June, while retail trade declined into the negatives. AUD/USD initially dropped yesterday testing but not clearly breaching the 0.7100 (S1) support line and maintained a largely sideways motion afterwards. We continue to maintain a bias for a sideways motion as analysed in yesterday’s report. Should the bears take over, we could see AUD/USD breaking the 0.7100 (S1) support line and aim for the 0.7025 (S2) level. On the flip side, should the bulls dominate, we could see the pair breaking the 0.7200 (R1) resistance line and aim for the 0.7300 (R2) level. 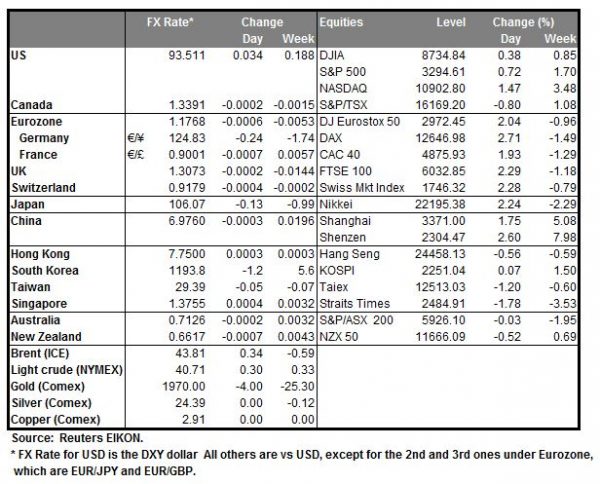 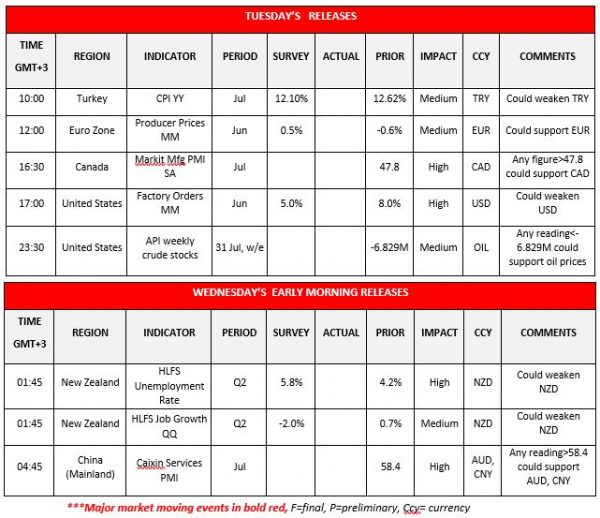