The USD seems about to stabilise after Friday’s gains against some of its counterparts, as the US employment report was a tat bit better than expected. The Non-Farm Payrolls figure was better than expected yet was slashed below half in comparison to June’s figure, while the unemployment rate dropped slightly more than expected for July. The overall results were encouraging yet at the same time remain worrisome, as the rebound of the US employment market seems to be stalling. It should be noted that the talks in the US Congress have hit a halt, regarding the new fiscal stimulus package, and the White House was forced to act as was expected and President Trump signed an executive order for an unemployment relief of $400 per week. We maintain the view that the negotiations in the US Congress are the main issue for the USD, yet also the US-Sino relationships could play a role.AUD/USD dropped somewhat on Friday breaking the 0.7200 (R1) support line, now turned to resistance. We maintain a bias for a sideways motion currently. The pair’s direction could substantially be influenced by market sentiment though. Should a selling interest be displayed by the market, we could see the pair breaking the 0.7100 (S1) support line and aim for the 0.7025 (S2) level. Should the pair find buying orders along its path, we could see it breaking the 0.7200 (R1) line and aim for the 0.7300 (R2) resistance level.

CAD falls as the Canadians impose counter tariffs on US products

The Canadian dollar fell against its US counterpart, as the US re-imposed tariffs of 10% on imports of aluminium from Canada, late Thursday. The Canadian side has announced that it will impose on their side also tariffs on US aluminium products the following day, at the level of US$2.7 billion. Analysts tend to note that the US tariffs may have been politically aimed, in line with US protectionism, which makes the situation even more difficult and tend to foresee a weakening of trade between the two sides, which may hurt the Canadian side more. The outlook of the Canadian economy seems to be darkening and at the same time oil prices remain rather stable, which is not exactly helpful for the Loonie. USD/CAD rose during Friday, clearly breaking the 1.3320 (S1) resistance line now turned to support. We tend to maintain a bullish outlook for the pair as the consecutive higher peaks and troughs seem to be forming over the past two days. Should the bulls dominate USD/CAD, we could see the pair breaking the 1.3425 (R1) resistance line and aim for the 1.3500 (R2) level. Should the bears take over, we could see USD/CAD breaking the 1.3320 (S1) support line and aim for the 1.3200 (S2) level.

Today in the European session, we highlight Norway’s CPI rates for July and Eurozone’s Sentix index for August. During tomorrow’s Asian session, we get New Zealand’s electronic card retail sales for July and Japan’s current account balance for June. Chicago Fed President Evans is speaking in the American session.

On Tuesday, we get the UK employment data for June, Germany’s ZEW indicators for August and the US PPI for final demand for August. On Wednesday, we get Australia’s wage price index for Q2, from New Zealand RBNZ’s interest rate decision, UK’s GDP for Q2 and manufacturing output for June, Eurozone’s industrial production growth rate for June and the US inflation measures for July. On Thursday, Japan’s corporate goods prices for July, Australia’s employment data for July Germany’s final HICP rate for July and the US weekly initial jobless claims figure. On Friday, we get Japan’s China’s industrial output and retail sales growth rates for July, Eurozone’s 2nd estimate for the GDP for Q2, and from the US the retail sales growth rate for July, the Industrial production for July and the University of Michigan preliminary Consumer Sentiment for August. 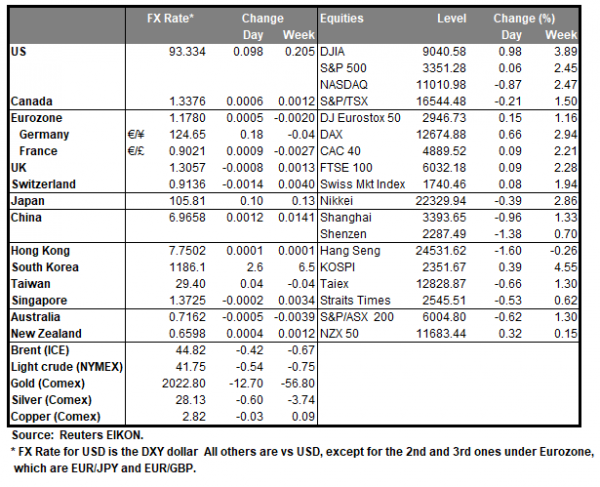 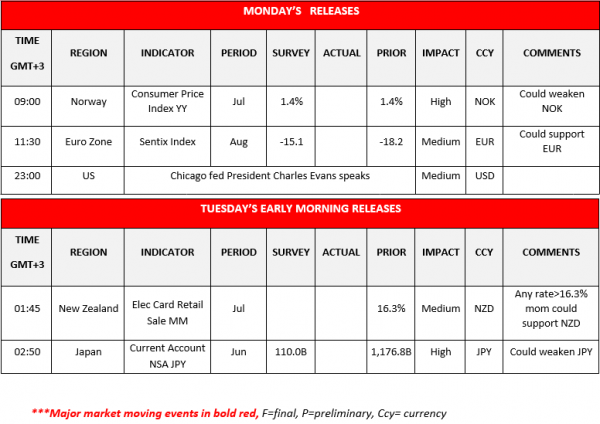