Australia’s employment data for July will hit the markets at 01:30 GMT Thursday. Forecasts point to a spike in the unemployment rate, though that’s likely owed to more people coming back to the labor market, not a setback in the economy. As for the aussie, its broader direction will depend mostly on global risk sentiment and vaccine news. Yet, given the RBA’s yield curve control strategy, encouraging vaccine headlines might not boost the aussie across the board – only against the yen. Statistical quirk?

A rising unemployment rate is not always bad news, and that’s what the upcoming data is likely to demonstrate. Australia’s unemployment rate is forecast to have jumped to 7.8% in July, from 7.4% previously, but for ‘healthy’ reasons as the labor force participation rate is also expected to have risen to 64.4%, from 64.0% in June.

In a nutshell, this is a statistical quirk. It simply shows that more people were interested in finding work, so when they started looking for jobs again, they were suddenly counted as ‘unemployed’ instead of being outside the labor force. It’s an encouraging sign, even if the unemployment rate is rising.

Confirming as much, employment is expected to have risen by 40k, a slowdown from the 210k in June, but still a positive number. The slowdown is likely related to the latest spike in cases in the state of Victoria.

Data are a sideshow

Turning to the market reaction, what will matter most for the aussie is any surprise in the unemployment rate, as that is what the Reserve Bank of Australia’s (RBA) looks at most closely to formulate its policy decisions. 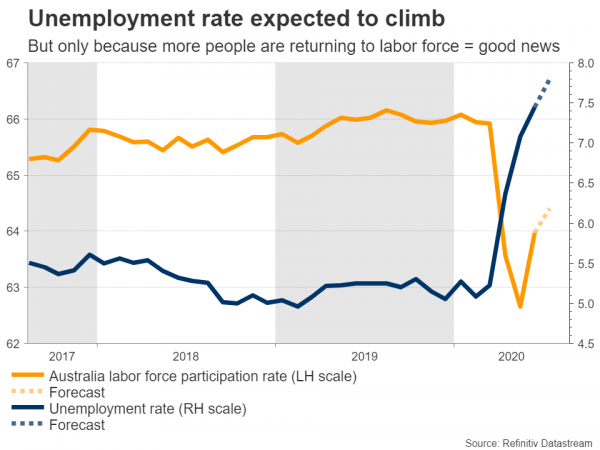 Yet, the data will only trigger some volatility in the aussie, not a trend. The broader direction will be decided mainly by global risk sentiment. Given Australia’s open, export-heavy economy, the aussie tends to move in the same direction as stock markets for example. Hence, what happens with the US stimulus negotiations may be crucial for direction.

But as weird as it sounds, the aussie may not climb on encouraging vaccine news. Yes, such a headline might boost stock markets, but the aussie might not play along. The reason is the RBA’s yield curve control strategy.

We got a taste of this earlier this week. Russian President Putin shocked the world by announcing that Russia has developed a successful coronavirus vaccine, but the aussie fell in the aftermath. It fell because the announcement boosted bond yields across the world, but not so much in Australia, because the RBA has pledged to keep them at a specific level no matter what.

Hence, in a situation where global bond yields are rising, Australian yields can’t really participate, which makes the aussie less attractive by comparison. Interest rate differentials are crucial for the FX market, so if US yields are climbing but Australian ones aren’t, relative rates move in favor of the dollar and make it more appealing.

The exception to this is the yen, because the Bank of Japan also has a yield curve control strategy in place. Hence, aussie/yen might be among the few aussie pairs that can see decent gains on encouraging vaccine news, because Japanese bond yields won’t rise much either in a situation like this.

Taking a technical look at aussie/yen, in case of encouraging data, the pair may move back above 76.40 and challenge the 76.85 zone again.

On the downside, a disappointing set of data may see the pair hit 75.65, where a downside break may open the door for the 75.10 region.