His dominant theme is the need to support the economy through job creation.

Every policy should be judged on its capacity to boost jobs.

His position on borrowing and budget deficits is quite clear, “By borrowing today to support the economy we are avoiding an even bigger loss of output and jobs that would damage our economy and society for years to come, which would put ongoing strain on the budget”.

He supported the argument noting that Australia’s public finances are in strong shape; public debt is low; balance sheet strong due to decades of good economic performance; and financing costs have never been lower”.

Expansionary fiscal policy has adequate scope to boost demand while governments need to free up supply through structural reform.

In response to a question contrasting Federal support ($314 billion) with State support ($44 billion) he noted that the states have considerable influence on job creation, particularly in the infrastructure space, and should be focussed on that objective rather than protecting a credit rating.

It has always been refreshing and insightful to listen to the Governor’s observations around policy and the economy. But this event, with its penetrating question time, also provides some opportunities to examine the Governor’s own policy positions.

That opportunity came with one line of questions around the Bank’s current forecasts which envisage the inflation rate still at 1.5% (having dipped to 1%) by the end of the forecast horizon – December 2022 and the unemployment rate at 7%.

Recall that the Bank’s objectives are: full employment (generally assessed at 4.5–5.0%) and inflation sustainably in the 2–3% range.

With such discouraging (but entirely realistic) forecasts a Committee member opined as to whether the Bank should be doing more on its own policy front.

The Governor pointed out that the Board could reduce the cash rate by 0.1–0.2% but doubted whether that would make any worthwhile difference.

Another possibility was to move the bond rate target out along the curve from the current three year maturity to five years. He pointed out that the decision to target the rate (Japan is the only other country exercising yield curve control) was based on two considerations.

He noted however that he could not be confident that the cash rate would remain unchanged for five years making the extension of the target to a five year maturity unhelpful (my word) from a forward guidance perspective.

Looking forward it therefore seems likely that the Bank is most likely expecting to raise or abandon the target for the three year rate some time in 2022. That lift in the three year bond rate figures in our own rate forecast for 2022 implying that markets would be factoring in a rate hike some time beyond 2023.

The Governor was also questioned on negative interest rates. The Committee member quoted me as a proponent of negative rates – potentially making me a member of a select “rogues gallery”.

I was pleased that the Governor responded with some more detail around his view that negative rates are “extraordinary unlikely” without entirely ruling them out.

He recognises that the major benefit would be on the exchange rate. I agree that a small open economy with large foreign liabilities is likely to benefit through negative rates with a lower exchange rate.

I have no doubt that the key benefit seen by the RBNZ which is still holding open the possibility sees the boost to competitiveness as the key advantage, (specifically if RBA and FED eschew the policy). 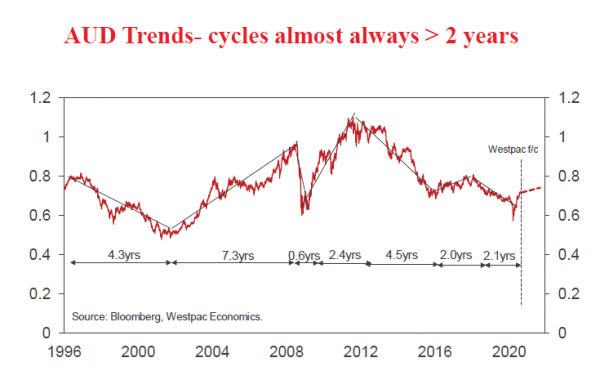 As I have argued before, the major proponents of negative rates – Europe; Japan; and Switzerland have large net foreign assets limiting the benefit to the exchange rate of a negative rate approach.

While the Governor acknowledged the benefit from a lower exchange rate he continues to argue that the costs would outweigh those benefits.

He highlighted the costs in terms of the credit creation mechanism pointing out that European banks’ lending had been impacted.

There is always the demand/supply issue when assessing slow lending growth just as the Governor himself explained the slow take up in his own very generous TFF facility.

Issues around bank profitability through negative returns on exchange settlement balances can be managed through a threshold system.

But the big issue seems to be around negative retail rates. He noted that if the deposit rate was negative people would save more than spend on the basis that expected income growth would be negative.

The net stimulus argument supporting rate cuts seems to be contradicted when rates go negative. I agree that the potential non linear impact of negative rates on overall confidence is a key area of uncertainty.

A large corporate or institution when confronted with a negative cash rate might be motivated to invest in a higher yielding risky asset or invest offshore potentially boosting activity either through a more competitive exchange rate or more funding for real assets.

His factual observation is that those countries with negative rates have not gone “more negative” in the COVID period nor has any central bank gone from positive to negative. If the global recovery expected post COVID disappoints then more pressure might come on to central banks, including the RBA, to be more a aggressive in their policy options.

The Governor was asked about other ways to lower the AUD.

His point was that intervention (which would be done by selling AUD and buying foreign assets such as US Treasuries or gold) would only work if AUD was over valued relative to fundamentals – trying to move a currency away from fair value would be extraordinarily difficult given the depth of the currency markets.

Some issues come to mind here.

Firstly, of course, negative rates would lower the fair value.

Secondly, fair value models differ with their choice of the risk component. Fair value at a time of high risk would, using such models, be much lower for the same commodity price/yield differential than without a risk component.

I think that commodity prices are overstated as a source of demand stimulus in Australia. Lifting profits for mining companies which are typically targeting margins and not volumes will not necessarily boost demand in Australia. It is our view that AUD has entered a long upswing period – at least out to end 2021 and most likely beyond.

The figure shows the history of the AUD’s long cyclical movements. With the current downswing having ended in March a two year plus upswing is now most likely. But supply issues could easily derail fair value in 2021 potentially opening up a considerable overvaluation of the AUD.

Perhaps, under such circumstances, and given our view that the Australian economy will be growing around 3%, compared to RBA’s 5%, in 2021 the negative interest rate/intervention debate might get a wider hearing.