It’s a relatively quiet week, with the main highlights being the Eurozone’s PMIs and the latest FOMC minutes. In the political arena, American and Chinese negotiators will meet over the weekend to review the ‘phase one’ trade deal. For markets though, the most crucial drivers will be whether US lawmakers can break the deadlock in the stimulus negotiations, and whether enthusiasm around a vaccine will keep pushing global yields higher, crushing the yen.

Will markets have to scream first, before Congress delivers?

Vladimir Putin stunned financial markets this past week, after he announced that Russia has developed the first successful coronavirus vaccine. Coupled with some signs that US inflation may be picking up, that pushed global bond yields higher, leaving the Japanese yen as the biggest casualty in the FX market.

Since the Bank of Japan has a yield curve control strategy in place that effectively keeps a ceiling on Japanese yields, the yen becomes less attractive in an environment where global yields are rising. Interest rate differentials are crucial for the FX market, so if US yields are climbing but Japanese ones can’t really participate, relative rates move in favor of the dollar and make it more appealing.

While dollar/yen did advance, the dollar still lost ground against other major currencies, which likely comes down to uncertainty around whether Congress will deliver a new stimulus bill. Another element that may be holding down the greenback is the optimistic mood in stock markets, which have so far remained resilient to the stalemate in Congress. 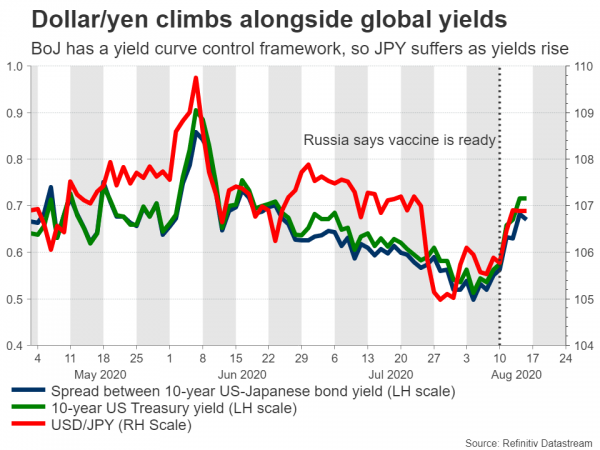 It sounds contradictory to say that the dollar is feeling the heat of this uncertainty, yet stocks aren’t, but keep in mind that stocks are being powered higher by the tsunami of liquidity the Fed has unleashed – whereas the dollar isn’t.

Which brings us to the key point. Stock markets seem to be calculating that a stimulus deal will arrive soon, because the stakes are too high. No politician wants to be blamed for shattering the recovery with an election scheduled in 12 weeks. Yet, the negotiations are going nowhere as neither side feels the urgency to compromise, and the longer this impasse lasts, the bigger the risks for the recovery. This begs the question: will stocks have to sell off first before politicians feel enough pressure to get a deal done?

Beyond any updates from Congress, the key release in the US next week will be the minutes of the latest FOMC meeting on Wednesday. The Fed took no action in July but noted that high-frequency indicators suggest the recovery lost some steam, thanks to the spike in infections. The message was that if this persists, more action might be necessary. 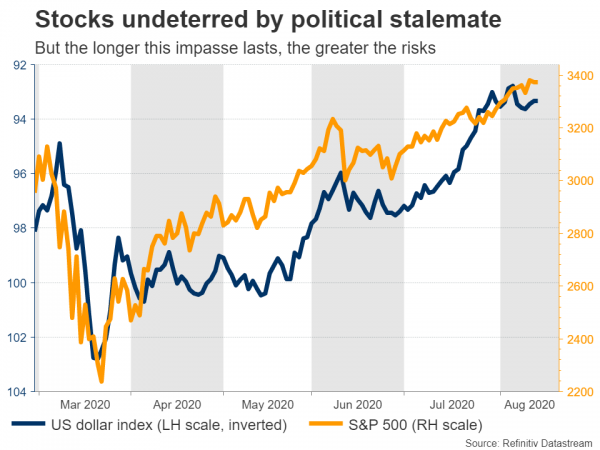 This is what the minutes are expected to reveal. How concerned are policymakers about this slowdown, and come September, what are they likely to do? The most likely next step is to strengthen the forward guidance, by committing to not raise rates again until inflation reaches or slightly overshoots the 2% target. Strong signals this might be implemented soon could weigh on the battered dollar, but perhaps not much as it wouldn’t be any surprise.

Another driver for markets may be the meeting between US and Chinese officials to review the ‘phase one’ trade deal. China hasn’t bought as many US agricultural products as this deal envisaged, which normally would spell risks of re-escalation. However, Trump’s top economic advisor said lately that China’s purchases “are really good numbers”, so that risk seems low. There’s also a political angle here: Trump needs US farmer votes in key battleground states to win re-election, so he can’t afford to blow this deal up.

The US Markit PMIs for August are also out on Friday.

In euro land, the preliminary PMIs for August will be released Friday as well. Forecasts point to an uptick in the manufacturing index but a decline in the much larger services sector. That would be a worrisome sign, as much of the euro’s rally has been predicated on the assumption Europe will recover faster than most economies, especially the US. 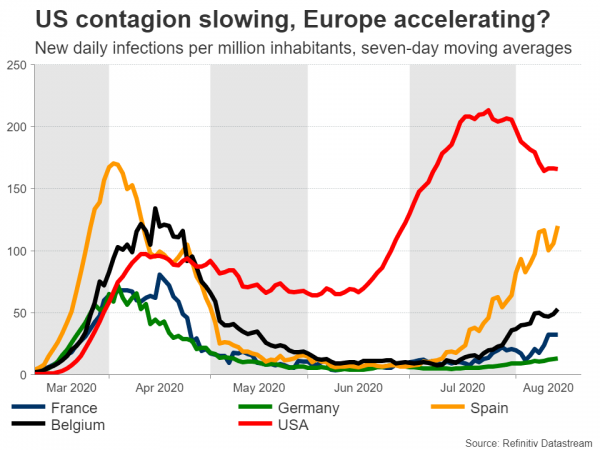 Technically speaking, the most important near-term signal will be whether euro/dollar can break above the $1.19 zone, which rejected the pair twice already. A third failure may open the door for a substantial correction, especially when considering that the trend in European/American infections has started to turn.

Daily US infections are still far higher than Europe’s, but if one strips out the absolute numbers and just looks at the trend, America is slowing down while Europe is sadly accelerating again. If this contagion trend continues, the narrative that Europe will ‘out-recover’ the US might take a beating soon.

The minutes of the latest ECB meeting are also out on Thursday, though this is usually not a market mover.

British and Canadian data in the spotlight

Both the United Kingdom and Canada will release inflation and retail sales data next week, on exactly the same days. Wednesday brings CPI numbers for July out of both countries, ahead of retail sales on Friday. 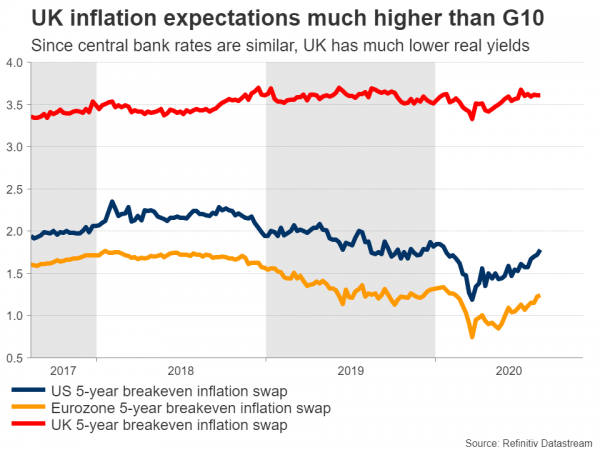 In the UK, the pound has staged a remarkable rally, capitalizing mostly on a weaker dollar, stronger risk appetite, and improving domestic data. But unless the dollar continues to collapse, it’s difficult to envision this rally stretching much further. Since UK inflation expectations remain much higher than those for the US or Eurozone, Britain now has the lowest real interest rates in developed markets by far, which is typically anathema for a currency over time.

As for Canada, the loonie has been an outlier this year. It has recovered since the March meltdown, but to a much smaller degree than other commodity currencies like the aussie or kiwi, despite a powerful rebound in oil prices. Its lackluster performance is likely owed to America. Around three-quarters of all Canadian exports are destined for the US, so if the US recovery is stalling, Canada will feel the heat. 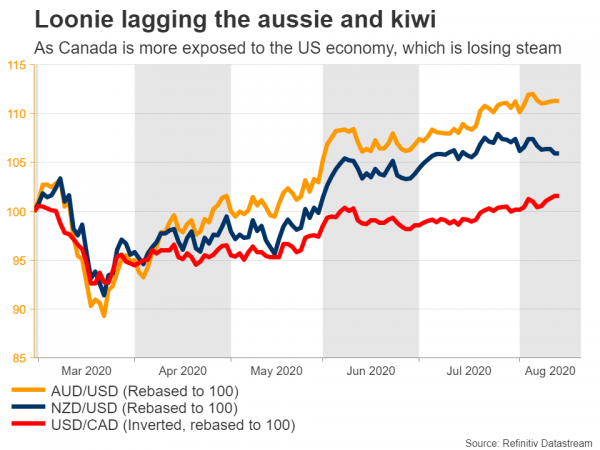 Yet, there’s reason for optimism too. The currency’s underperformance so far implies greater scope to strengthen going forward, once the US virus situation is brought under control – something also supported by CFTC positioning data that show large speculators are still net short the loonie.

Finally, Japan’s GDP data will hit the markets early on Monday, ahead of inflation numbers for July on Friday. That said, the yen hardly responds to data. What will truly matter is whether the recent spike in global yields continues, or not.