The federal government will deliver one of the most highly-anticipated throne speeches in recent memory on Wednesday – amid a slowing economic rebound and rising COVID case counts. Though not an economic blueprint, it will lay out Ottawa’s vision for what policy supports it believes are needed to carry the country through the next phase of recovery.

Measures already floated include improved permanent support for the unemployed – building on exceptional levels of policy support delivered over the spring and summer. Estimates for how much all of that will cost will probably have to wait until a fall fiscal update.

A barrage of reports issued in past week reinforced what will probably be a historically large, and yet still only partial, bounce-back in economic activity over the summer in Canada. Home resales surged again in August. Reports on retail, wholesale, and manufacturing trade for July left GDP still on track to rebound 40% (at an annualized rate) in the third quarter. But that would still only retrace about 57% of the decline over the first half of the year. And early data – including our own tracking of card purchases – continue to flag a slowing pace of recovery.

Meantime, virus case counts are being watched more closely again in Canada given a faster uptick in recent weeks, particularly in Ontario, Quebec, British Columbia, and Alberta. This latest wave of infections has been more concentrated among less vulnerable age cohorts, meaning fewer hospitalizations. Still, easing in containment measures has already been paused, and in some spots reversed.

At a minimum, the increased spread is another reminder that there are limits to how much the economy will recover while the virus threat remains.

In the United States, virus cases are still very elevated but have been trending broadly lower. And economic data continues to improve even if at a slower pace. U.S. home resales in August likely picked up again after surging back above year-ago levels in July. And the number of new jobless claims probably continued to edge lower from what are still exceptionally high levels. Nevertheless, while early improvements have been encouraging relative to very pessimistic priors, the road to a ‘full’ recovery still looks long. 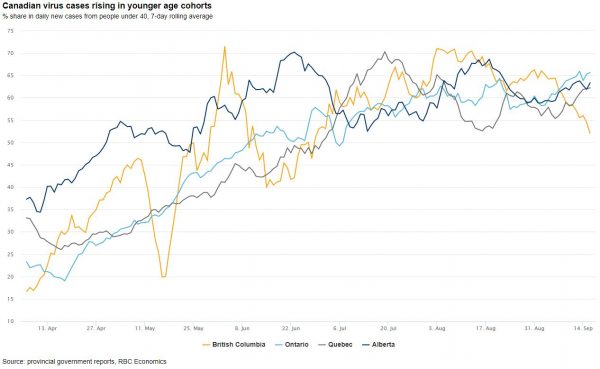 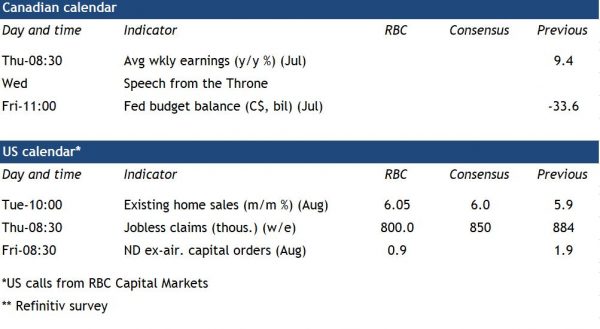