The Swiss National Bank (SNB) will conclude its meeting at 07:30 GMT Thursday, and with Switzerland having fallen back into deflation, markets are pricing in a 30% chance for a small rate cut. That said, the SNB already boasts the lowest rates worldwide, so it is unlikely to cut any deeper as running out of policy ammunition would risk generating a negative expectations loop. Instead, it will probably stick to huge FX interventions. The franc may tick higher on the news, but any rally might not be sustained for long.

Deflation is what a central bank is there to prevent nowadays, so one can say the SNB hasn’t been doing its job very well this year. Switzerland recorded its seventh straight month of falling prices in August, raising fears that the SNB is losing its battle with inflation for good.

Falling prices could make consumers more likely to postpone large spending decisions, in hopes of getting a lower price in the future. But if enough people think like that, consumption tends to collapse and the economy enters a recession, making a bad situation worse. 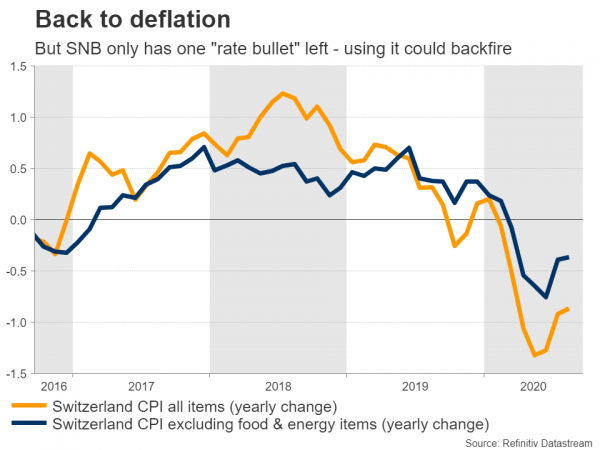 As such, it would normally be high time for the SNB to cut rates to encourage borrowing, hoping to lift demand and inflation back up. True enough, money markets are pricing a one-in-three chance of a 10-basis points rate cut at this meeting.

Can’t be left without ammo

The problem is that the SNB has very limited room for more stimulus, as Switzerland already has the lowest interest rate globally at –0.75%. While it could theoretically cut a little further, there is probably only a single cut left in the SNB’s arsenal.

But using it could backfire. First, a 10 bp rate cut would be almost meaningless in the big picture – it is too small. More importantly, the SNB doesn’t want to be seen as having used absolutely all its firepower.

If markets sense the central bank is entirely out of policy options, that could give rise to a negative expectations loop, where long-term borrowing costs rise because investors know there is nothing left to push them down. That tightens financial conditions, making the Bank’s inflation-lifting job even harder. It is analogous to shooting yourself in the foot.

Plus, reducing rates any further would infuriate the nation’s commercial banks, which are already complaining that their industry has been decimated precisely because of negative interest rates.

Considering all this, the SNB is likely to stick to what has been its primary policy tool in recent years: currency intervention. A stronger currency holds down inflation and makes exports less competitive abroad, so the central bank regularly intervenes in the FX market to weaken the franc, which tends to gain in times of global turmoil because of its haven status. 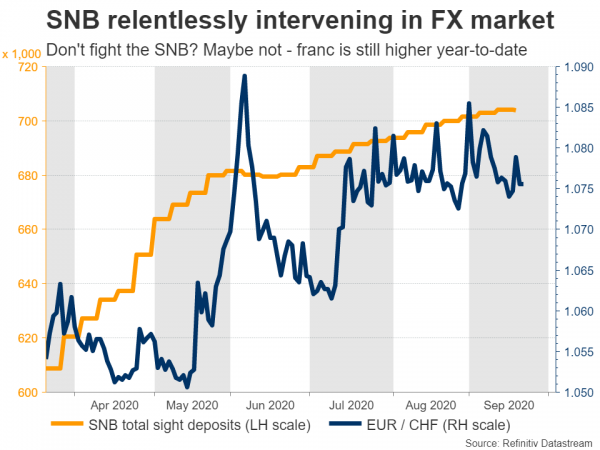 And intervene it has. Judging by the relentless increase in total sights deposits – a gauge of FX intervention – the SNB has been very active this year. And yet, the franc is still higher year-to-date both against the dollar and the high-flying euro.

Upside risks on the decision?

Bearing in mind the ~30% chance for an immediate cut, if rates are left on hold, the currency could spike slightly higher on the decision as those expectations are proven wrong. Beyond that, the franc’s path will be determined mainly by how global risk appetite evolves, and specifically whether the latest stock market correction continues.

In the big picture, traders who are long the franc should always bear in mind that they are ‘fighting the SNB’, having the additional risk of being caught on the wrong side of currency intervention.

Taking a technical look at euro/franc, another wave of declines could stall initially near the 1.0845 zone, where a downside break would open the door for a test of 1.0725.