After a lower open in Europe, the major stock indices started to move back into the positive territory and US futures rebounded off their lows following Wednesday’s sharp tech-driven sell-off.

On the one hand, virus cases are rising at an alarming rate in Western Europe and other parts of the world, while uncertainty over whether there will be more fiscal stimulus in the US is adding to election uncertainty there. Italy and Germany appear to have joined Spain, France and UK in reporting increasing number of cases, as concerns mount that a second wave of the pandemic will derail the economic recovery.

On the other hand, however, the fact that death rates have remained very low is what is stopping investors from panicking like they did in March.

You also have various stimulus measures around the world that had been introduced during the pandemic, still providing tailwind. Although some measures have or are about to expire, some have been extended. Indeed, UK’s Chancellor Rishi Sunak, is today set to unveil new emergency job measures, expected to replace the furlough scheme which is set to expire next month.

What’s more, central banks around the world continue to maintain expansionary monetary policy stances. This morning, for example, the world’s most boring central bank AKA the Swiss National Bank re-iterated this message. The SNB left its monetary policy unchanged yet again, with the central bank re-iterating that it was ready to accelerate its interventions in foreign currency markets to stem the upward pressure on the franc. According to the central bank, the franc remains “highly valued” and it stands ready to intervene “more strongly” to undermine the currency’s safe haven appeal. Indeed, analysts at Credit Suisse have estimated the SNB has sold more than $98bn worth of francs in the first half of this year, its most aggressive effort yet to suppress the franc appreciation. And it looks like investors are not standing in the way of the SNB this time, with the EUR/CHF rising despite a falling EUR/USD exchange rate, which fell further this morning on the back of rising virus cases in Europe and after the German Ifo improved to 93.4 from 92.5 the month prior, but still missed expectations of 93.9. The USD/CHF climbed to its best level since July 24.

Coming up later in the afternoon we have US jobless claims, new home sales and Fed Chair Powell’s testimony, as well as speeches by a couple of other Fed officials.

It is worth keeping a close eye on the major European indices as investors weigh the conflicting macro factors as I discussed above. As well as rising virus cases, we had some rather disappointing services PMI data out of the Eurozone on Wednesday, which underscored concerns over a faltering economic recovery. But the soft data also raised the prospects of more stimulus, which is presumably why stocks are refusing to fall freely. The weaker EUR/USD exchange is further boosting the appeal of exporters. It explains why the DAX was up a good 0.8% at the time of writing: 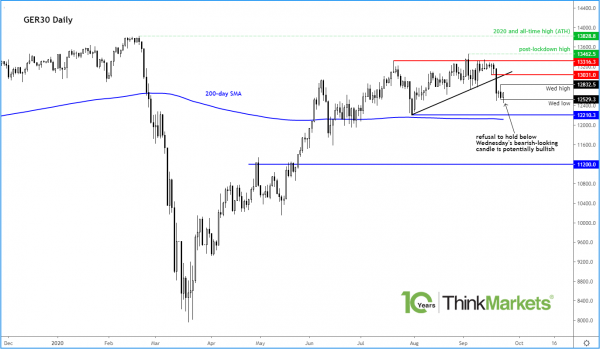 The index created a bearish-looking inverted hammer/engulfing candle on the daily chart on Wednesday. Yet, after initial weakness today, it has bounced back to go within its prior range. The DAX’s refusal to hold below Wednesday’s bearish-looking candle is potentially a bullish sign. If I am reading this correctly, the index may now go on to take out the trapped sellers’ stops that would be resting above Wednesday’s high at 12833/35, after first sweeping liquidity below Wednesday’s range earlier.

DJI 30 Price Swings And Waves Before US Elections

US Recovery Not Evident In Asia

Equities Back In The Meat Grinder After Big Tech Earnings

White – Knuckle Ride Aint Over Yet