It has been a miserable week for NZD/USD, which has fallen 3.2 percent, its worst weekly showing since May. The pair has fallen every day this week, but has stabilized on Friday. In the European session, the pair is trading at 0.6542, down 0.07% on the day.

The Reserve Bank of New Zealand maintained interest rates at its policy meeting on Wednesday. The central bank sliced rates in dramatic fashion back in March, when policymakers cut rates from 1.00% to 0.25%, in a concerted effort to stabilize the economy as the Covid-19 pandemic hit the country. What caught the attention of investors was that bank members stated that negative rates were on the table. This stance is not all that surprising in the current environment of ultra-low interest rates across the globe, as well as the fact that the central bank views the balance of risks as tilted to the downside. Still, negative interest rates is the last thing that investors want to hear, and its very mention has contributed to this week slide by the New Zealand dollar. 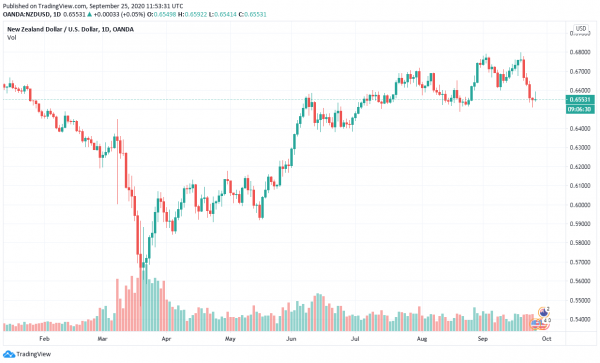 Week Ahead – Time Running Out for Trump