A perfect storm of bad news has thrown global markets into disarray. America is running out of stimulus, fears of a constitutional crisis after the election are running rampant, Europe is wrestling with a second virus wave, and central banks have moved from ‘all in’ to ‘check’ in poker terms. Considering all this, the upcoming US employment report could be a make-or-break event for the dollar and equities. In the political arena, Brexit talks will resume in Brussels while Trump and Biden will finally meet for their first debate.

The stimulus-infused rally in riskier assets seems to have fallen apart in September, as reality came back to bite investors. The selloff started on concerns that valuations in the tech sector had gotten out of touch with reality, but it quickly intensified as markets realized the US Congress was highly unlikely to agree on another relief package anytime soon, threatening to derail the recovery.

The fight over the Supreme Court vacancy has poisoned politics in America, and investors fear it will overshadow everything else heading into the election, pushing the chances of a bipartisan stimulus agreement close to zero. Of course, that may not be entirely true, as the more markets kick and scream, the higher the odds that minds in Washington will focus on a deal.

Europe is dealing with its own blues as virus cases have flared up again. In some countries the numbers are much higher than the first wave, raising fears that new lockdowns may be on the menu. The real issue is that most governments have already depleted their fiscal firepower, so any new lockdowns might not be accompanied by the powerful wage-supporting measures we saw previously. 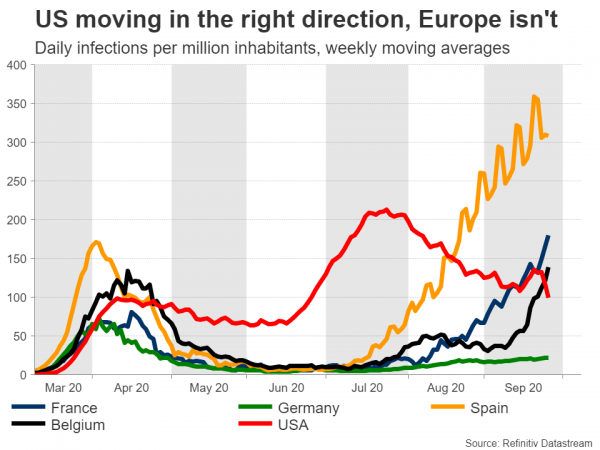 And it’s not just governments getting cold feet. Central banks including the Fed and the ECB seem to have decided they have done all they can for now, appearing reluctant to signal any new easing programs. This was perfectly captured by Fed chief Powell this week, who let slip that he and his colleagues have ‘basically done all the things we could think of’. Ouch.

So there’s no more stimulus on the way for some time, new lockdowns or at least tighter restrictions are looming, and on the election front, Trump refuses to commit to a peaceful transfer of power if he loses. If he challenges the result and the trial goes to a Supreme Court that is missing one member, leaving it at a 4-4 deadlock, the stage would be set for a real constitutional crisis.

No wonder the markets are freaking out. Investors are dumping equities and piling into the safe warmth of the dollar, sparking a short squeeze in the reserve currency. From a euro/dollar perspective, there’s not much standing in the way of a test of $1.15 if relative EU/US infections continue moving in opposite directions, shattering the narrative of European outperformance. 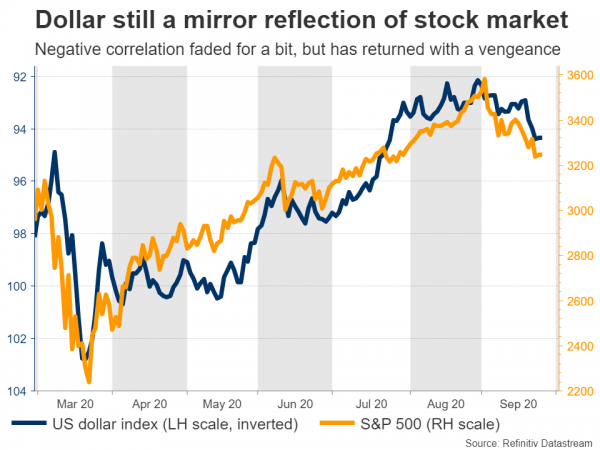 But in the bigger picture, this still seems like a risk-off episode that will eventually pass. Once the election is out of the way, a stimulus deal will likely come, and the Fed is unlikely to sit on its hands for long either. Plus, there’s always the prospect of a vaccine being developed in the coming months to cheer up investors.

For now though, whether the selloff continues might depend mostly on the US employment data that will be released Friday. Nonfarm payrolls are expected to have risen by another 875k in September, from almost 1.4 million in August, pushing the unemployment rate down to 8.3%, from 8.4% previously. The forecasts echo the composite Markit PMI, which showed that ‘employment continued to increase solidly, albeit a slower pace than in August’.

Indeed, initial and continued jobless claims also declined substantially between mid-August to mid-September, which is the period this employment report will cover, diminishing the risk of a major negative surprise in the NFP print. We will get a taste of what to expect from the ADP employment report, which is out Wednesday.

Meanwhile, the ISM manufacturing PMI for September will hit the markets on Thursday, alongside personal income and spending data, and the core PCE price index for August. There’s also a parade of Fed speakers on the agenda. 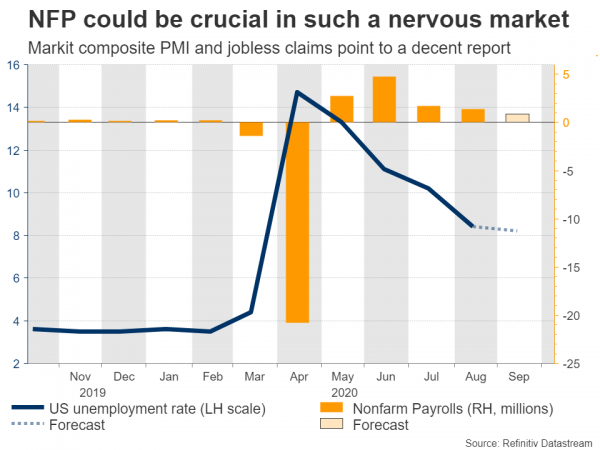 As for the dollar, the negative correlation between USD and equities has returned with a vengeance lately, with the two becoming mirror opposites again as investors seek shelter from the equity storm. Hence, how long this risk-off episode lasts might be one of the biggest variables for the dollar’s near-term performance.

In politics, Donald Trump will meet Joe Biden for their first debate late on Tuesday. Such events usually pass unnoticed in markets, but this time could be different given how close the race is and the potential consequences. If so, we will finally get a sneak peek into how markets might react. Conventional wisdom has always been that Trump is good for both the dollar and stocks, but considering the Republicans’ utter reluctance to back any meaningful stimulus, investors may not see it that way anymore.

European inflation and Brexit talks on the radar

Across the Atlantic, the euro area will see its latest inflation stats on Wednesday, before unemployment numbers on Thursday. The euro bloc surprisingly fell into deflation in August and forecasts suggest it stayed there in September, which if confirmed would add even more pressure on the ECB to raise its stimulus dose again soon, posing another headache for the euro. 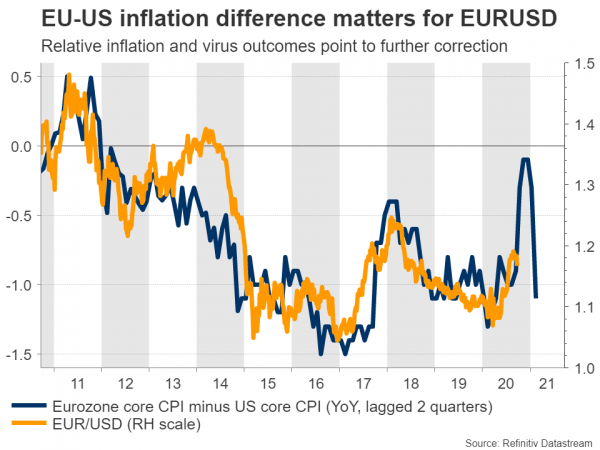 In Brussels, the final scheduled round of Brexit talks will commence. After some chaos in recent weeks, where Boris Johnson attempted a ‘power play’ to force the EU into concessions, the rhetoric has improved again as both sides insist a deal can still be found. That may be true, but in this negotiating process, concessions typically happen only when the clock is about to strike midnight and a do-or-die deadline is approaching.

It is much easier politically speaking to ‘sell’ a compromise to the public if the alternative is an immediate economic disaster. The implication is that while a deal is still the most likely scenario, we might not see any real signs of progress until late October or so, which may keep the pound under some pressure for now, before an eventual rally.

In other news, Wednesday will bring the official PMIs from China for September and Canada’s monthly GDP print for July. In Japan, the Tankan business survey for Q3 is out Thursday, ahead of Australia’s retail sales for August, due on Friday.