The Australian dollar continues to drift in Tuesday’s trade. In the North American session, AUD/USD is trading at 0.7166, down 0.21% on the day. After posting strong gains of 1.8% last week, the Aussie has leveled off and is range-trading.

RBA holds off the rate trigger

The Reserve Bank of Australia held the Cash Rate at 0.25% at its policy meeting earlier on Tuesday. This move was widely expected, so the reaction from the Aussie has been muted. Most analysts had projected that the RBA would maintain rates, especially with the government releasing a budget just hours after the RBA rate decision. At the same time, the rate statement contained some hints that a rate cut could be coming at the November policy meeting. The final sentence of the rate statement, which is always significant, stated that “the Board continues to consider how additional monetary easing could support jobs as the economy opens up further.” As well, the statement referred to the markets’ pricing in the probability of further monetary easing. With a rate cut likely around the corner, it could be a tough road ahead for the Aussie. 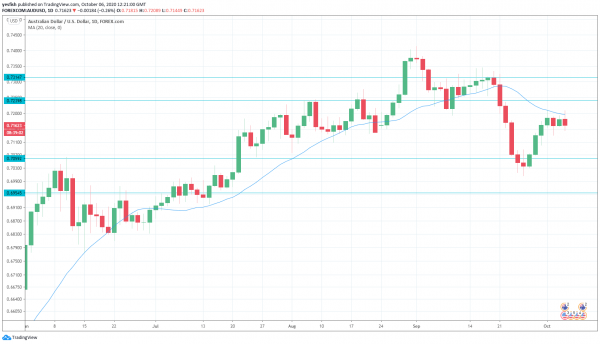