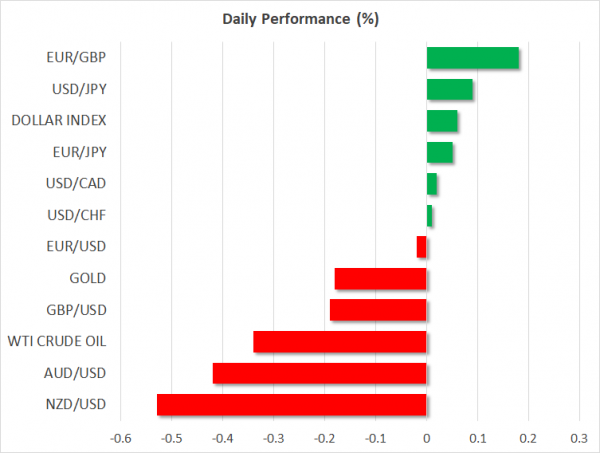 Stimulus deal getting closer but may come too late

Talks in the United States on a new round of fiscal stimulus remains very much the focus for investors as time is fast running out for a pre-election spending bonanza. House Speaker Nancy Pelosi and Treasury Secretary Steven Mnuchin have reportedly continued to “narrow their differences”, with more discussions expected later today.

However, even if the White House and the Democrats succeed in striking a deal before today’s end-of-day deadline, there are still some uncertainties as to whether that would give Congress enough time to pass the bill, not to mention the strong possibility of Senate Republicans defying the President and voting against a large stimulus package.

The one too many question marks about the size and timing of the next virus relief bill overwhelmed investors on Monday, pushing Wall Street sharply lower. However, the stimulus talks weren’t the only concern as election anxiety has also dampened the market mood.

Democratic candidate, Joe Biden, may be comfortably ahead in the opinion polls but if recent history is anything to go by, the polls can get it very wrong, especially when it comes to the Electoral College system used in America. While there’s a very good chance Biden will become the next president of the United States, a close call could result in the election being contested in what would be the worst-case scenario for the markets.

The political uncertainty in Washington was also weighing on global equities today, with Asia ending the session mixed and Europe opening in the red. Though, US stock futures were modestly higher.

The souring mood on Wall Street yesterday helped lift the US dollar off its lows and most majors continued to struggle against the greenback today. The Australian dollar was one of the worst performers as expectations that the Reserve Bank of Australia is prepping for major policy easing gathered pace.

The minutes of the RBA’s October meeting published earlier today as well as the comments by Assistant Governor Chris Kent strongly pointed to the Bank expanding its quantitative easing programme to include longer-dated bonds when it meets in November. A cut in the cash rate is also on the cards, though the RBA may save that ammunition for a rainier day.

The aussie has greatly benefited from 10-year Australian government bond yields being significantly above those of other advanced economies as the RBA currently targets only the 3-year yield. A policy shift that expands QE to further along the yield curve could seriously undermine the aussie, potentially sounding the death knell for its incredible rally.

The aussie was last trading 0.3% lower, dragging the kiwi down along with it.

The euro edged up on Tuesday, adding to yesterday’s gains as investors pared back expectations of an imminent action by the ECB to boost its asset purchases, while the pound was flat amid confusion about the state of the Brexit negotiations.

UK Prime Minister Boris Johnson is insisting that the EU must fundamentally change its approach for the talks on a post-Brexit trade deal to resume, accusing it of not respecting the UK’s sovereignty. Downing Street’s hard stance comes even after the EU agreed to the UK’s demands to intensify the negotiations and start work on a legal text.

But signs that behind the scenes the two sides are working to mend bridges is keeping sterling supported. Even though the odds of a no-deal outcome have gone up since last week, investors see the latest impasse as just another negotiating tactic and that some form of free-trade agreement is still doable before the year-end.