The Australian dollar has registered considerable losses on Tuesday. In North American trade, AUD/USD is trading at 0.7028, down 0.57% on the day.

The Australian dollar finds itself under strong pressure. AUD/USD fell to a low of 0.7027 on Tuesday, its lowest level since September 28th. The Aussie has coughed up almost 3 percent in just over a week, and the RBA minutes have added to the woes of the currency.

The minutes indicated that policymakers support a rate cut, and analysts have circled November 3rd, which is the bank’s next policy meeting. The minutes showed that the catalysts for lowering rates were the high value of the Australian dollar and the economic downturn caused by the lockdown in Victoria State.

If the RBA trims rates, it would likely lower rates to a record low of just 0.10%. There could be further rate cuts in the works; RBA Assistant Governor Kent said on Tuesday that further easing could send rates into negative territory. This is not the first time that the RBA has said negative rates are on the table, but with another rate cut a foregone conclusion, the spectre of negative rates has become more realistic, and this will put more pressure on the Australian dollar, as investors will be looking for more attractive alternatives to park their funds.

In addition to a rate cut at the November meeting, the RBA is expected to announce new quantitative easing in the form of large-scale bond purchases. With the central bank expected to implement further monetary easing, AUD/USD bond yield spreads have dropped lower, as 2-year and 5-year yields have both fallen into negative territory. 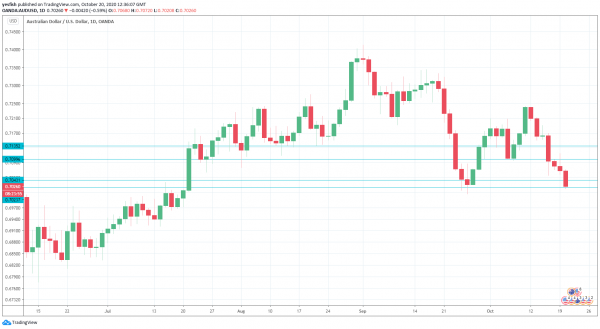