The Eurozone’s preliminary PMIs for October will hit the markets at 08:00 GMT Friday and will reveal just how much damage businesses have suffered by the second wave of coronavirus that is rampaging through Europe. The euro has not reacted much so far to the restrictions and curfews imposed in many countries, but that could change if the PMIs spark fears of another negative GDP print in Q4.

European coronavirus infections have sadly gone through the roof in recent weeks. Most countries are reporting record numbers of new cases that are multiple times higher than their peak in April, forcing governments to implement tighter social measures or outright curfews so that healthcare systems are not overwhelmed.

Storm clouds are therefore gathering over the economy, as several businesses are forced to operate at reduced capacity again and consumers are turning more defensive. Politicians have been reluctant to implement even partial lockdowns so far, opting for more targeted measures instead. However, if cases continue to spiral out of control, they may have no other choice. 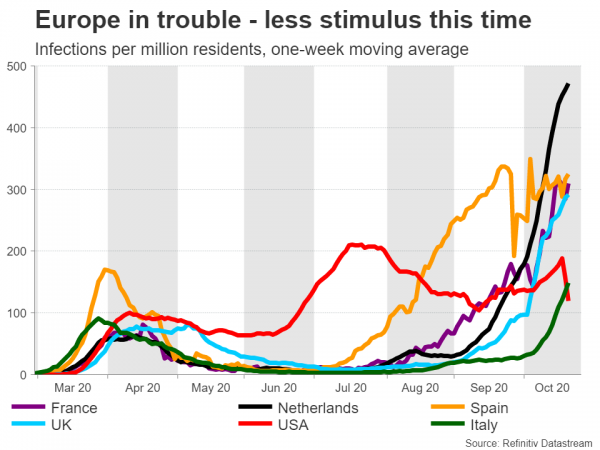 The real fear is that this time, governments won’t roll out the big stimulus guns we saw earlier to shield their economies. The European recovery fund is stuck in the bureaucratic pipeline, public deficits have ballooned already, and there is simply less political appetite for huge relief packages if it is only a partial lockdown.

Markets do not seem to fully appreciate all this yet, but they might if the upcoming PMIs reflect a further loss of economic momentum, putting the risk of a double-dip European recession on the radar.

Echoing the economy’s darkening prospects, both the manufacturing and the services PMIs are expected to have fallen in October, albeit not much. Frankly, these indices were already at worrisome levels in September, consistent with an economy that was barely growing even before infections skyrocketed.

In terms of potential surprises, the risks seem tilted to the downside, particularly for the services sector. The forecasts point to only a minor drop, which may be underestimating the concerns among businesses about the immediate future now that lockdowns are back on the menu. 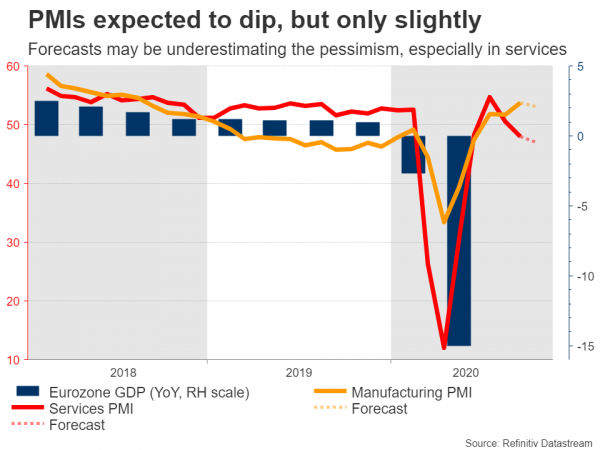 The only saving grace may be the period this data was collected. Markit usually collects its data between days 10-22 of each month, so the companies that responded early may not have been in panic, as that was roughly the same time when infections really started to explode. In other words, the pessimism may not have trickled entirely into this month’s data.

Growth downgrades on the way, ECB to act

In the bigger picture, there’s no denying that the risk of another negative GDP print in Q4 has risen dramatically. A wave of growth downgrades may be about to hit Europe if these PMIs disappoint, so the stakes for the euro are high.

Similarly, the ECB may be forced to increase its stimulus offering in December to keep the struggling economy afloat, after the bloc’s core inflation rate hit a record low in September. Even some of the biggest hawks within the ECB have softened their language lately amid deflation risks, opening the door for more action. Clear signals that more easing is imminent could come as early as next week’s ECB meeting, adding another headache for the euro.

All told, it is difficult to be optimistic on the euro at this stage, but the caveat is that there are a lot of external factors that could keep other major currencies under pressure as well, limiting the euro’s downside. Specifically, both the US dollar and the British pound have politics to worry about right now.

In this light, euro/yen may be a better proxy to capture any euro weakness, instead of euro/dollar or euro/sterling. Taking a technical look at euro/yen, a potential disappointment in the PMIs could push the pair back down towards the 124.25 zone, with even steeper declines aiming for the 123.70 region.

On the flipside, an upside surprise in the PMIs could see the pair head higher for a test of 125.00, which is not far from the next resistance of 125.30.

USDJPY Back To Pivot