Retail sales grew 0.4% in August, slightly below Statistics Canada’s 1.1% preliminary estimate a month ago. Growth in retail sales clearly slowed over the summer, but only after a quicker-than-expected bounce-back from the unprecedented drop amid COVID-19 containment measures in the spring. Retail sales were already back above year-ago levels in June, and were up 3.5% from a year ago in August with today’s data. Much of the gain in sales from July came from spending on building materials (4.5%), food and beverages stores (0.8%) and gasoline stations (1.2%). Sales at clothing stores remained as one of the few subcomponents of sales that are still tracking well-below pre-shock (February) levels. Back-to-school shopping didn’t provide the usual boost to clothing sales with a large number of students returning to virtual rather than physical classrooms.

Statistics Canada estimated that retail sales were “relatively unchanged” in September, although earlier industry reports suggested that vehicle sales continued to recover. Other forms of household spending have also been stronger, with home re-sales up an exceptionally strong 46% from a year ago in September. Labour markets are still very weak, but government income supports are offsetting a larger share of lost income than normal. But whether retail sales momentum can be maintained through to Q4/2020 also depends on the response of governments and households to the latest resurgence in virus spread. 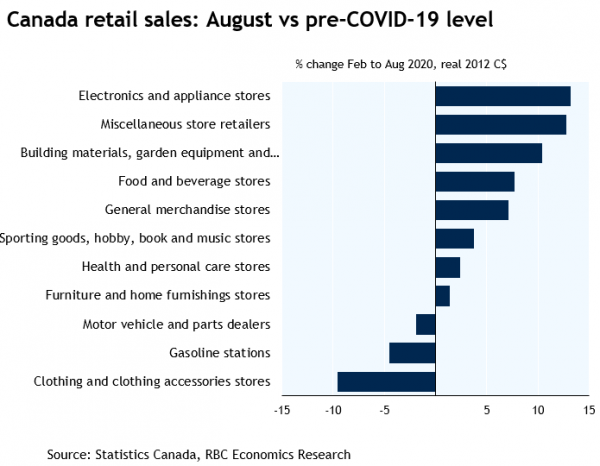