Expect next week’s GDP data to confirm that the uneven Canadian recovery continued in August. Our forecast suggests the economy grew by 0.7% (roughly in line with Statistics Canada’s 1% preliminary estimate), a slowdown from July’s 3.0% increase and June’s 6.5% rise. That would leave the level of activity still running 5% below pre-pandemic levels. The retail sector recovery continued to outperform other industries in August and housing market activity surged. But manufacturing sales took a step back. Some of the sectors hardest-hit by the pandemic – accommodation & food services, and entertainment industries – will likely show gains though activity remained well behind year-ago levels and lagged the rebound in other sectors. While the economy likely continued to grow in September, the resurgence in COVID-19 cases and the re-imposition of some targeted containment measures could weaken growth beyond that.

Overall GDP is still on track to rise at an annualized 45% in the third quarter. That’s higher than the Bank of Canada’s forecast in the July Monetary Policy Report (+32%) and we expect the central bank to bump up its Q3 GDP growth assumptions in the Monetary Policy Report update Wednesday. More attention will be paid to the bank’s expectations for the economy beyond that given the resurgence in COVID-19 – and certainly, there are limits to how much it can recover while the threat of the virus remains. The central bank assumed a 2% increase in Q4 GDP in their last ‘central tendency’ forecast, slightly above our own current tracking for a 1% increase. The early recovery in consumer spending was supported by unprecedented amounts of fiscal and monetary stimulus. And low interest rates have clearly played a role in the rebound in housing markets. But the recovery in spending on services has been much slower, and that has also been weighing on inflation. We expect the BoC to remain focused on economic growth rather than near-term inflation concerns, and look for exceptionally low interest rates to be maintained for the foreseeable future. 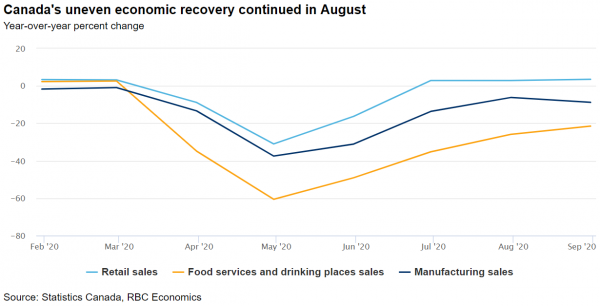 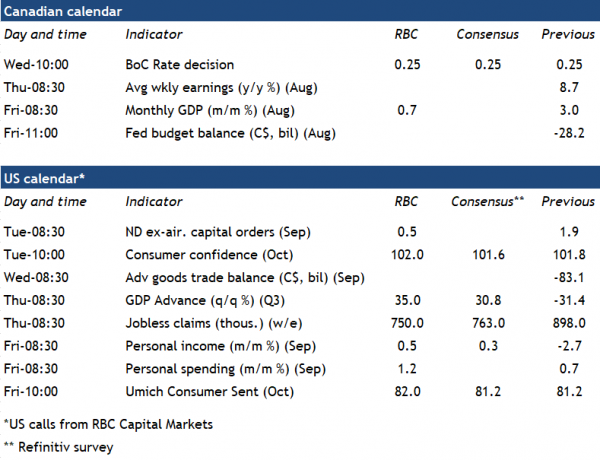