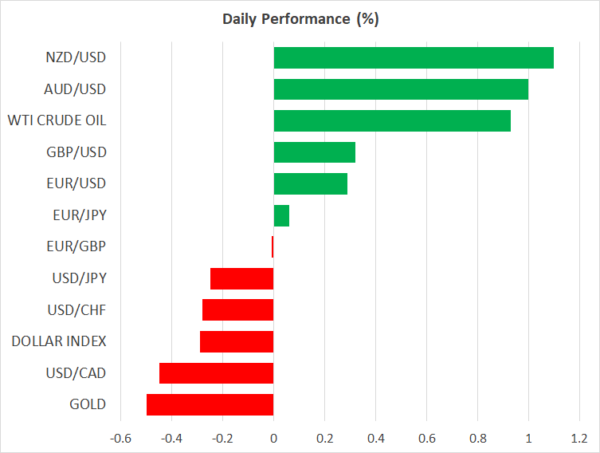 A perfect storm of encouraging news has engulfed global markets early this week, reawakening some animal spirits. The latest AstraZeneca vaccine isn’t as effective as its counterparts but is much cheaper and easier to store, the US economy seems to be firing up, and president-elect Biden is set to fill crucial financial posts with market-friendly candidates.

The vaccine news got the ball rolling yesterday, but it was the PMIs that really sent shockwaves across most assets. The US preliminary manufacturing and services PMIs from Markit surged to multi-year highs, with the surveys showing a record increase in both employment and inflation pressures.

The takeaway was that the US economy is quite literally heating up, and that businesses are feeling much better about the future in a vaccinated world. Meanwhile, it was reported that former Fed Chair Janet Yellen will likely return to serve as Treasury Secretary, while Lael Brainard is primed to stay at the Fed to become Chair when Powell’s term ends in 2022. The combination implies an unprecedented synergy between fiscal and monetary policy.

In the FX arena, the PMIs propelled the reserve currency much higher. However, those gains have already evaporated and the dollar is trading even lower on Tuesday, without any clear catalyst behind this reversal.

The stock market is much more confident though, with the S&P 500 closing half a percentage point higher yesterday and futures pointing to a similarly higher open today. In Japan, the Nikkei rose 2.5% to reach new multi-decade highs, also boosted by the decline in the yen, which paints a brighter picture for exporters. Likewise, crude oil is testing its recent peaks, while commodity currencies are shining.

Markets are therefore in state of bliss right now, but whether this party will continue really depends on the next steps by the Fed and Congress. Do the encouraging PMIs diminish the argument for any more stimulus? The Senate was already reluctant, and the fear is that the Fed may also be wary of unleashing another wave of liquidity amid signs that inflation is already in the pipeline.

This is the wild card for both the dollar and equities now. Will the improving atmosphere keep the Fed sidelined in December, or will policymakers ‘look through’ all this and focus on the worsening virus trend? Investors will look for answers in remarks by several Fed officials today, including Bullard at 13:00 GMT, Williams at 17:00 GMT, and Vice Chairman Clarida at 17:45 GMT.

The New Zealand dollar is flexing its muscles on Tuesday, following reports that stable housing prices may be added to the RBNZ’s mandate. Central banks usually focus on stabilizing inflation and maximizing employment, but New Zealand has a chronic issue with soaring home prices. The implication is that the RBNZ is less likely to pursue aggressive rate cuts, as that could juice house prices even further.

Finally, the main casualty of the latest bout of euphoria has been gold. The metal was crushed under the boot of a stronger dollar yesterday and hasn’t been able to recover today as the greenback retreated, which is a bad look. Bullion broke below the crucial $1850 zone and technically, there isn’t much to stop a test of $1800.

That said, the bigger picture still seems favorable, even if the pain continues for now. The ‘reflation’ trade will likely dominate next year, and central banks are unlikely to allow bond yields to move higher from here, setting the stage for lower real rates that are typically a blessing for bullion. The joker is how the dollar performs.