A torrent of data next week will likely confirm that the Canadian economy grew – albeit at a slower pace – in October.

But that was before a wave of new virus containment measures delivered a sharp sting to the economy. We expect November to mark a step back in the recovery – and project an outright decline in GDP of half a percent or more in the month.

First to October: retail sales were relatively unchanged in the month, manufacturing sales rose 0.6% and wholesale sales rose 0.9% according to advance estimates. Despite a pullback in the hospitality sector, overall output edged up 0.2%, following a 0.8% rise in September, according to preliminary estimates from Statistics Canada.

Yet as COVID 19 cases ramped up in November, so too did the restrictions on business and consumer activity, suggesting a contraction in the already hard-hit hospitality and travel sectors has likely accelerated. Indeed, the accommodation & food services industries alone accounted for a massive 45% of the remaining shortfall in employment versus pre-shock levels as of November. Retail spending likely slowed in November too after several regions (Toronto/Peel and Manitoba) imposed the shutdown of non-essential stores.

On a more positive note, re-imposed restrictions have been significantly less disruptive than in the spring and manufacturing survey data continued to improve in November in both Canada (manufacturing PMI at 55.8) and abroad. Solid building permit issuance suggests housing starts remained strong. As long as the virus threat remains, we look for tempered spending on services going forward. But all told, we’re expecting most of the rest of the economy to weather the second round of restrictions better than in spring lockdowns. With vaccines on their way, the downturn in activity is expected to prove shorter and shallower than in early 2020. 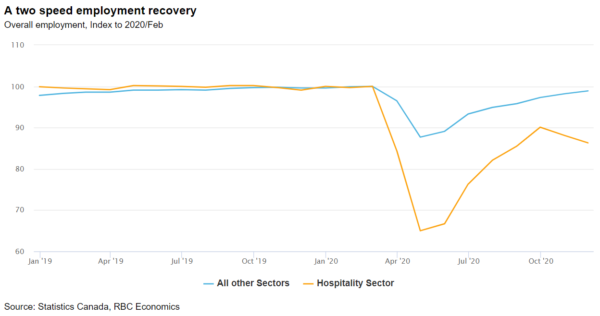 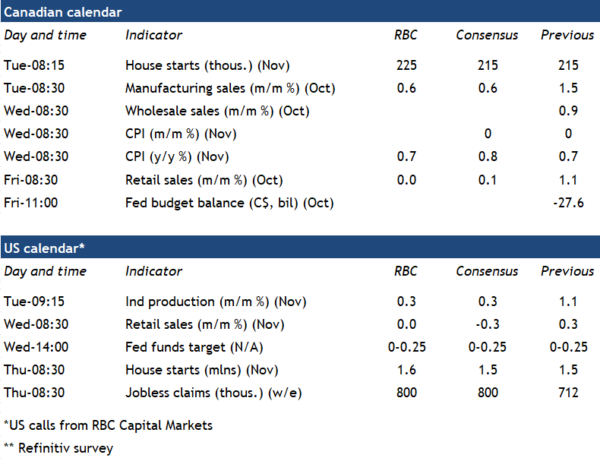