The BoC will conclude its policy meeting at 15:00 GMT Wednesday and there are some whispers in market circles about a ‘micro rate cut’. Covid infections have risen, the economy is losing momentum because of the lockdowns, and the vaccine rollout is progressing slowly, so a solid case can be made for a cut. However, the situation is not dire enough for the BoC to use its final rate bullet either. Instead, policymakers could send strong signals about a future rate cut and perhaps boost their QE program, which could still inflict some damage on the appreciating loonie.

Several provinces across Canada have gone back into lockdown lately as a second wave of covid hit the nation. The economic impact is already visible, with the labor market losing jobs in December and the Ivey PMI sliding. Meanwhile, the vaccine rollout has been slow. One month after the vaccination process started, only around 1.5% percent of the population has received a jab.

Complicating matters further, the loonie has appreciated substantially, threatening the outlook for growth and inflation. A stronger currency can make a nation’s exports less competitive abroad and dampen the price of imports domestically. Since Canada is an export-heavy economy, this matters.

But BoC might not use its final rate bullet

As a result, there’s some speculation the BoC might announce a ‘micro rate cut’ to stimulate the economy. Market pricing currently implies around a 20% chance for a 10 basis points cut at this meeting, which would take the central bank rate down to 0.15% from 0.25% currently. But is this necessary?

The answer might be no. Several recent developments negate some downside risks. Firstly, oil prices have recovered powerfully. Canada is a major exporter of oil, so this could offset some of the economic pain. Additionally, America is about to go on a federal spending spree and some of that boost is bound to spill over into Canada, given their close trade relationship.

And the domestic economy is not entirely in ruin. The latest business survey by the BoC itself was stellar on almost all fronts. The caveat is that this survey was conducted before the latest lockdowns began.

But perhaps the biggest argument against an immediate rate cut is that it could backfire. If the BoC uses its final rate bullet, that may send the signal that it’s almost out of ammunition. Additionally, another rate cut could add more fuel to Canada’s already-hot housing market, increasing financial stability risks. 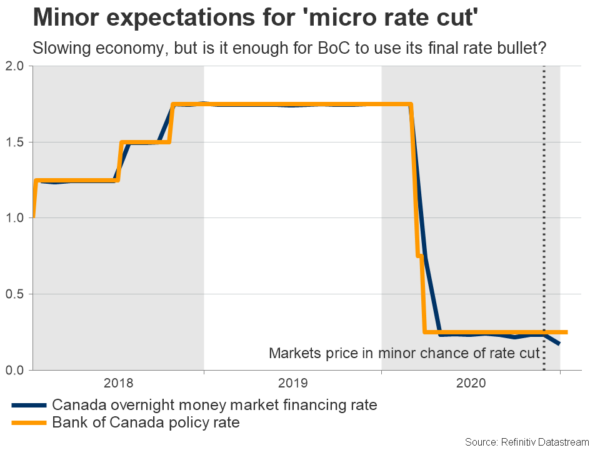 The only real benefit would be to clip the loonie’s wings, but perhaps simply threatening markets with a rate cut could be an even more effective strategy against currency appreciation, than actually doing it.

Dovish BoC, pipeline troubles, and the US dollar

Bearing all this in mind, the BoC might refrain from cutting rates, but clearly signal that a cut is on the cards and perhaps ramp up its QE program. A combination of dovish commentary, downward revisions in economic forecasts, and a QE boost would likely be enough to hurt the loonie, even without a rate cut.

In the bigger picture, there is scope for the latest retreat in the loonie to continue for now. A dovish shift by the BoC coupled with a recovering US dollar could push dollar/loonie higher still, especially considering recent reports that incoming US President Biden is planning to cancel the Keystone XL oil pipeline permit. This was a key pipeline project that would transport Canadian crude to the US, so killing it would spell trouble for Canada’s oil exporters.

Taking a technical look at dollar/loonie, a move back above 1.2800 could open the door for another test of 1.2930.

Besides the BoC meeting and Biden’s potential XL pipeline announcement, Canada’s inflation stats for December will be released at 13:30 GMT Wednesday, before retail sales for November hit the markets on Friday.