Will the Bank of England Embrace Negative Rates?

The Bank of England is due to announce its first policy decision of 2021 on Thursday at 12:00 GMT. No change in policy is expected but updated economic forecasts will be published alongside the statement. However, much of the focus will be on the Bank’s findings of its review into the effectiveness of a negative interest rate policy. The United Kingdom has been one of the worst-hit countries from the Covid-19 pandemic, both economically and in terms of infections and deaths. Yet, investors are hopeful the UK’s speedy vaccination programme will turn things around for the economy. Hence, even if the BoE were to embrace negative rates as a possible policy tool, it may not have to use it.

Much of Britain has been under a tough lockdown since the beginning of January and Prime Minister Boris Johnson has been reluctant to commit to a timeline of easing the country out of the current restrictions. The spread of the new UK variant of the virus has only just started to slow but the death rate remains high and health services are still under immense strain.

The government has set itself a target of vaccinating 15 million people by the middle of February, covering the most vulnerable, the elderly and all frontline workers. For all the criticism Johnson has received for his handling of the pandemic, this is one target the government is on track on achieving. If met, it could pave the way for some relaxation of measures in early March. 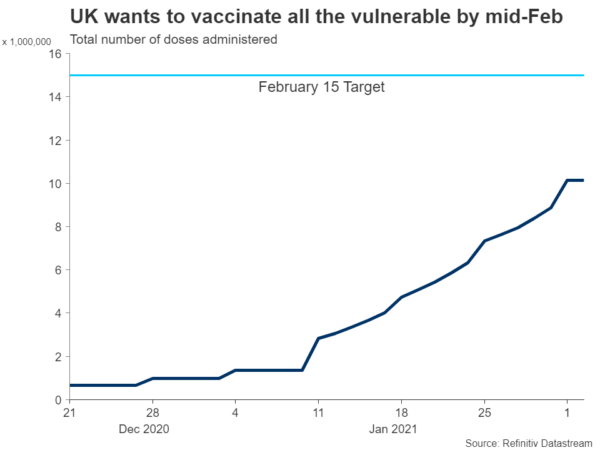 The Bank of England will be keeping a close eye on Johnson’s road map to exit the lockdown so it can plan ahead and adjust its forecasts accordingly. Policymakers will likely be forced to revise down their projections for Q1 as the latest lockdown was not predicted in November’s Monetary Policy Report. However, the main highlight for investors will be the Bank’s forecasts for the rest of the year, and in particular, how quick a recovery it is anticipating, as that would signal whether policymakers think further easing will be required.

Markets give Johnson’s vaccine strategy a thumbs up

Investors already appear to have made up their minds on that, betting that the UK’s massive immunization campaign will facilitate a stronger economic rebound in the second half than most other countries. Those expectations have lifted the pound to 33-month highs against the dollar and to a near 9-month peak versus the euro. 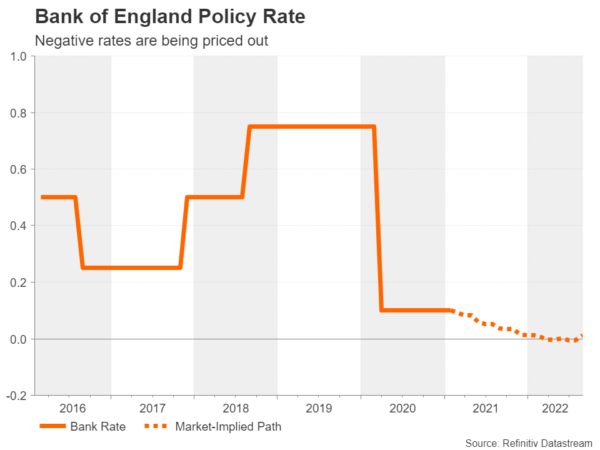 If all goes according to plan and new more dangerous strains of the coronavirus don’t jeopardize the exit strategy, the BoE may only need to expand its asset purchase programme modestly, if at all, in the coming months and not have to resort to negative interest rates for an additional boost. That debate on negative interest rates is expected to be concluded on Thursday when the Bank will finally reveal the findings of its feasibility study on negative rates.

The long-awaited review on negative rates

The BoE has carried out a detailed consultation with Britain’s banking sector on whether sub-zero rates would be useful or harmful. Whatever the conclusions of the review, one thing is clear – the likelihood of needing such a policy is now receding. However, that doesn’t necessarily mean policymakers will want to close the door on it either.

After all, the yields on UK gilts have been under pressure ever since the Bank first raised the prospect of adopting negative rates. This has not only kept borrowing costs low for the government, who needs to plug an ever-growing budget hole to finance virus relief measures, but it has also provided significant downside for sterling, which has been gaining bullish momentum lately now that the Brexit deal is done and vaccinations are underway.

Will the pound call the BoE’s negative rates bluff?

If the review endorses adding negative rates to the BoE’s toolbox, policymakers will likely embrace it but steer clear of signalling a rate cut to the negative area in the near-term horizon. While maintaining this bluff is unlikely to hold back sterling in the currency markets should the optimism for the outlook prevail, it could nevertheless accentuate any selloffs if something were to go wrong. For example, if the constant mutation of Covid-19 makes vaccines less effective, preventing a full re-opening of the economy, or if tensions between the UK and EU flare up over the ‘unstable’ post-Brexit trade deal, the pound could come crashing down.

But as things stand, the risks for sterling are skewed to the upside. Cable is currently consolidating, having failed to break above the $1.3750 resistance and being pulled lower by a resurgent US dollar. But should it regain positive posture, cable could aim for the 138.2% Fibonacci extension of the September 2020 downleg at $1.3791 before targeting the 161.8% Fibonacci of $1.3983.

However, if the downside risks intensify, the pair might retreat towards its 50-day moving average around $1.3535. Breaking below this support and losing the grip of the $1.35 handle could accelerate the declines towards the 78.6% Fibonacci of 1.3309.