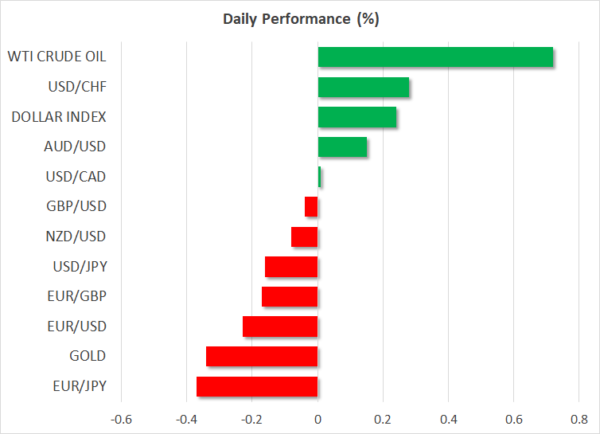 Yields rise across the board but only dollar shines

The yield on long-term Treasury notes have been creeping higher again as investors continue to price in a mega stimulus package in the United States. But it’s not just expectations of record debt issuance by the federal government that’s driving up yields. Inflation expectations are on the up too amid an abundance of liquidity, growing optimism about the economic outlook and rising energy prices. The Empire State manufacturing gauge by the New York Fed was the latest business survey to point to an increase in its prices paid index yesterday.

The 10-year Treasury yield shot above 1.30% yesterday to a one-year high before peaking at 1.3330% earlier today. The 30-year yield also set a fresh one-year high, climbing to 2.1120% in Asian trade. However, both yields have since pulled back, though the US dollar remains elevated.

An auction for 20-year Treasuries later today will be a key test for whether investors are still hungry to buy more debt given the trillions of dollars of sovereign bonds that have been issued worldwide during the pandemic.

The yields on other government bonds have also been rallying in recent days. But looking at real yields, which matter more for investors as they factor in inflation expectations, only the 10-year Japanese yield hasn’t been edging higher during February among the major economies. This probably explains why the Japanese yen has taken such a big tumble in the past couple of weeks, as falling real yields have accentuated the broader selloff from the unwinding of safe-haven trades.

It’s also why the dollar’s rebound has been more pronounced against the yen, breaking above the 106 level yesterday for the first time in four months. The pair was last trading slightly lower around 105.85, while the dollar index stood firmer by 0.25%.

Rising yields and a stronger dollar were anathema for gold as the precious metal once again found itself beneath the crucial $1800/oz level. Prices slid more than 1% yesterday and were extending losses today to fall around $1786/oz.

However, the jump in borrowing costs appears to have dealt only a minor blow to equity markets. Most major indices in Asia closed down by around 0.5% and losses in Europe were even smaller at the open. It comes after the S&P 500 traded within a tight range on Tuesday to close marginally lower. Wall Street futures suggest a slightly positive session today, though that could change if the Fed minutes give investors something to worry about.

The FOMC minutes of the January meeting are due at 19:00 GMT and will likely reaffirm the Fed’s pledge to maintain its current policy path until there’s been significant progress in the recovery. Fed officials have gone out of their way lately to reassure markets that they don’t see any inflation dangers. One of the Fed’s most hawkish member, Esther George, yesterday said the spike in yields was ‘not concerning’.

As long as the Fed keeps singing the same dovish tune, the risk rally doesn’t appear to be under threat.

Euro aligns itself with safe havens

Even in the FX sphere, the riskier currencies don’t appear to be done yet with their gains and the latest pullbacks are probably a temporary setback. The pound was once again attempting to reclaim the $1.39 handle, while the aussie has bounced back above $0.7760.

The euro, however, was the only non-safe haven to deepen its losses versus the dollar, slipping below the $1.21 level. Signs that the EU is making efforts to accelerate its vaccination drive do not appear to have provided much of a boost to the single currency.

In commodities, copper surged again on the back of the hopes for a strong vaccine-led recovery globally. Commex copper futures hit a more than 8-year high on Tuesday, reaching $3.848 per pound.

Oil also maintained its bullish momentum. Brent crude scaled a fresh one-year high of $64.06 a barrel today, while WTI held near yesterday’s peak. Aside from the strengthening demand outlook, oil prices have been boosted this week by huge supply disruptions in Texas amid a snow storm in southern US states, which has shut down oil refineries and paralysed shale production. 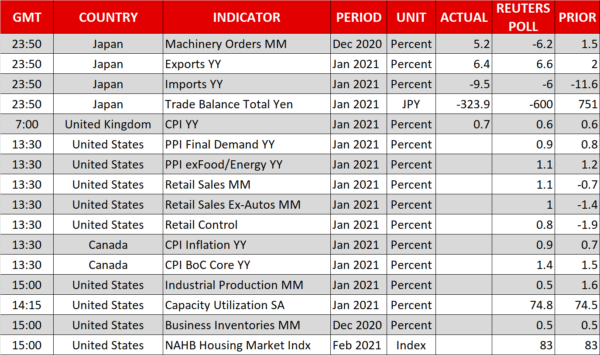