Momentum slipping ahead of OPEC+ meeting

Oil prices have enjoyed a remarkable rally over the last four months as the world has gone from entering the most severe wave of Covid-19 to rolling out vaccines and planning its final exit from the restrictions.

Efforts by OPEC+ have been key to this, including the surprise one million barrel cut from Saudi Arabia earlier in the year, which confirmed the group was committed to bringing the market back into balance even as the world starts to emerge from the pandemic.

But the next phase is arguably the most challenging for the group so it’s so surprise that the week before the next meeting, we’re seeing momentum slipping on the daily chart, even as prices are hitting new highs. 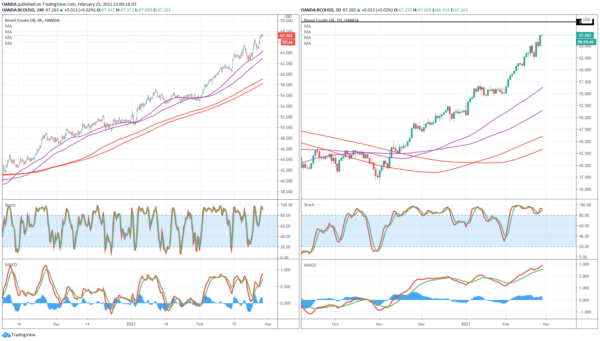 That kind of divergence is a red flag rather than a reversal signal but after such a powerful run and ahead of a meeting that could be challenging, a correction wouldn’t be entirely surprising.

We could still see some more gains in the near-term but the closer it gets to $70, the more interesting the momentum indicators will become, given the psychological barrier and the fact it has historically been a key level of resistance.

The 4-hour chart shows that price is currently quite extended, with it being quite far from the moving averages compared to where it’s traded the last few months. A move back towards the 55/89 SMA band would be very interesting, with it having been a key support zone all the way up. There have been small moves below at times but broadly speaking, it has been a key reversal point.

A break below this could signal a larger correction, although that may well depend on the outcome of next week’s meeting and how positive investors stay in the face of rising yields.