USD Gains Ahead Of The US Employment Report

The USD strengthened against a number of its counterparts yesterday as Fed Chairman Powell stated that he expects some inflationary pressures as the economy reopens and at the same time kept a dovish tone. The Fed’s Chairman also noted that the rise in yields was “notable and caught my attention”, while at the same time stated that it was not “disorderly” or likely to push the Fed to intervene. On a fundamental level it should be noted that the US Senate may be voting on Biden’s fiscal stimulus bill over the weekend, prolonging discussions. Today we expect that the market’s attention could be drawn to the release of the US employment report for February, probably with the NFP figure coming under investor’s focus, yet the unemployment rate could also shift investor’s opinion about where the US employment market is heading. USD/CHF rose yesterday testing the 0.9300 (R1) resistance line. We maintain a bullish outlook for the pair, as long as it remains above the upward trendline which steepened and characterizes its movement since the 23rd of February. We note though that the RSI indicator below our 4-hour chart is way above the reading of 70, implying that the pair may be overbought and a correction lower is possible. The same applies also for the Bollinger bands as the pair’s price action has reached and at some point even crossed the upper boundary. Should the bulls maintain control over the pair, we may see USD/CHF breaking the 0.9300 (R1) resistance line and aim for the 0.9375 (R2) level. On the other hand, should the bears take over, we may see the pair aiming if not breaking the prementioned upward trendline and the 0.9190 (S1) support line.

A dazed and confused Loonie edged lower against the USD, in the American session after the US yields were on the rise and uncertainty tended to dominate in the markets, hurting the riskier commodity currency. It should be noted that the Loonie weakened despite oil prices rising due to the decision of OPEC to keep production cuts in place, which under normal circumstances should support CAD, as Canada is a major oil producing country. Overall, the oil producing bloc, agreed to keep production cuts in place into April, allowing for small exemptions for Russia and Kazakhstan. CAD traders are expected to keep an eye out for oil prices and at the same time be also influenced by the general risk sentiment of the market, while Canada’s trade data for January are to be released today.

USD/CAD maintained a largely sideways motion after testing the lows of the 1.2610 (S1) support line and aiming the highs of the 1.2700 (R1) resistance line. We tend to maintain our sideways bias for the time being, yet fundamentals on both sides of the pair could alter its direction even today. We note that the RSI indicator below our 4-hour chart is near the reading of 50 implying a rather indecisive market. Should the pair find fresh buying orders along its path, we may see it breaking the 1.2700 (R1) line, which capped USD/CAD’s ascent yesterday and aim for the 1.2800 (R2) level. Should a selling interest be displayed for USD/CAD by the market, we may see the pair clearly breaking the 1.2610 (S1) support line and aim for the 1.2520 (S2).

On a busy Friday, we note in the European session, the release of Germany’s industrial orders growth rate for January and UK’s Halifax house prices for February. The main release of the day though is expected in the American session and it’s the US employment report for February, with its NFP figure. Also, in the American session we note Canada’s trade data for January and Ivey PMI for February, while later on we get the weekly US Baker Hughes oil rig count. On the monetary front, during the American session, BoE’s policymaker Haskel and Atlanta Fed President Bostic are to make comments. Please note that on Sunday we get China’s trading data for February which may affect AUD on Monday’s opening while on Monday’s Asian session we get Japan’s current account balance and later on BoJ’s Deputy Governor Amamiya is scheduled to speak. Calendar follows 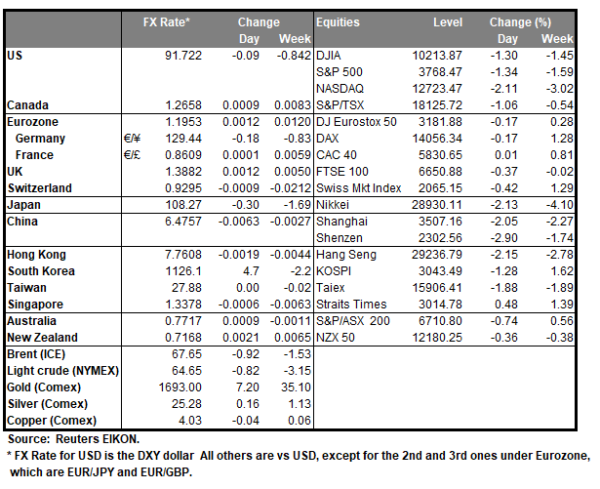 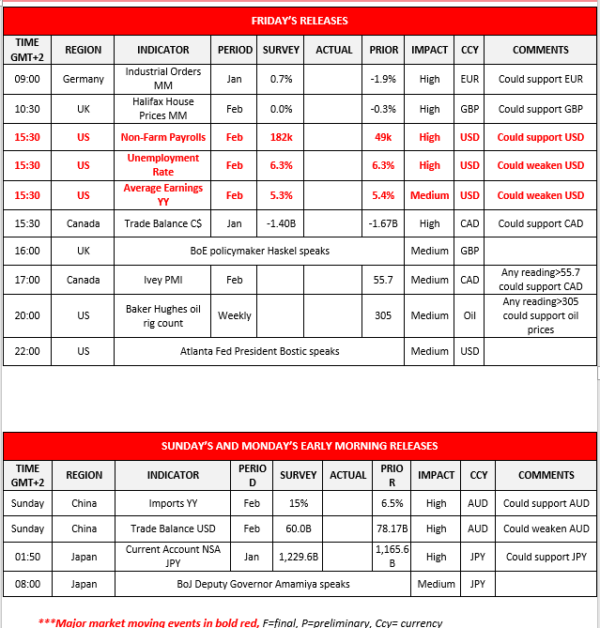