The US dollar rose in early trading as investors reacted to the latest $1.9 trillion stimulus deal. After days of negotiations, the US Senate passed the stimulus along party lines. This means that most US individuals will receive $1,400 checks. States and local governments will also receive billions of dollars. Analysts believe that the biggest stimulus in history will also lead to the overheating of the economy, which will lead to higher interest rates early next year.

The price of crude oil rose sharply in early trading after the stimulus deal. Brent, the international benchmark, rose to $70 for the first time in more than a year. The West Texas Intermediate (WTI), on the other hand, rose to $67. Historically, the price of oil usually rises after a major stimulus deal is passed because of the perception of more demand. The price also rose because of last week’s deal between OPEC and its allies about supplies. Also, it rose because of the small US rig count gain last week.

The Australian dollar declined slightly even after strong economic data from China. On Sunday, the country’s statistics agency released strong trade numbers for February. In total, the country’s exports rose by 60.6% in February after rising by 18.1% in January. Analysts were expecting a jump of 38.9%. In the same period, Chinese imports increased by 22.2%, better than the expected 15.0%. This was the biggest jump in trade in a few years. As a result, the monthly trade surplus jumped from $78.17 billion to $103.25 billion.

The AUD/USD pair declined from a high of 0.7725 to a low of 0.7687. On the hourly chart, the price is between the upper and middle lines of the Bollinger Bands. It is also slightly below the descending yellow trendline. Also, it seems to be forming an inverted head and shoulders pattern while the Relative Strength Index (RSI) has continued to increase. Therefore, the pair may break-out higher as bulls target the next resistance level at 0.7250. 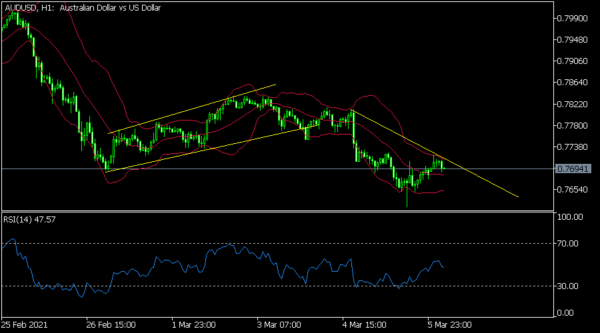 The EUR/USD broke-out to a low of 1.1900 as investors reacted to the US stimulus deal. On the four-hour chart, the price is slightly below the important support at 1.1950, which was the lowest swing on February 5. On the hourly chart, the price is along the lower line of the Bollinger Bands while the signal and main lines of the MACD have moved lower. Also, the price has already moved below the 15-period and 25-period exponential moving averages (EMA). Therefore, the pair may continue falling as bears attempt to retest last week’s low at 1.1895. 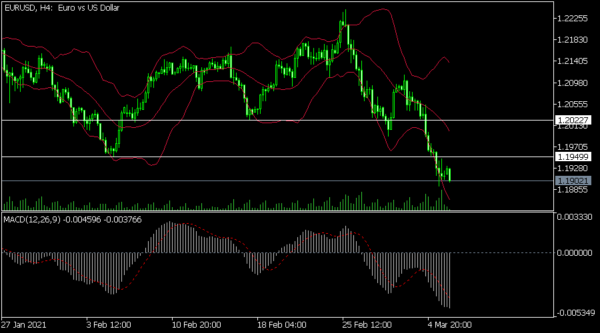 The Dow Jones index futures rose sharply after the latest US stimulus deal. The index rose to a high of $31,750, which is the highest level since February 25. On the four-hour chart, the price has moved above the 25-period and 15-period moving averages while the commodities channel index (CCI) has moved above the overbought level. The index will keep rising as bulls target the next key level at $32,000. 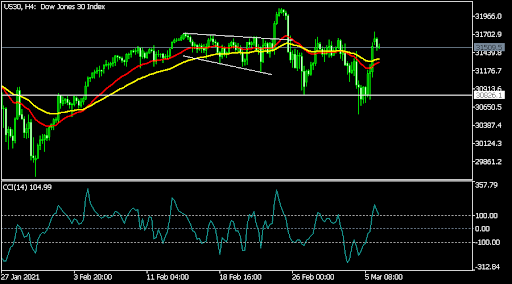