The Bank of England will announce its latest decision on Thursday (12:00 GMT) just hours after the Fed’s, likely keeping its monetary policy settings unchanged also. There is no press conference or new economic projections to accompany the March meeting, so no fireworks are anticipated. However, investors will be on the lookout for a possibly more upbeat outlook and to see whether the Bank will address the recent volatility in bond markets. The pound could benefit from a less gloomy view on the economy, though, the next meeting in May will be a bigger focus for traders, not just in currency markets, but in bond markets too.

Has the inflation ‘tiger’ been awakened?

As inflation increasingly dominates the conversation in global markets, Bank of England policymakers appear split on the risks of prices spiralling out of control. The Bank’s chief economist, Andy Haldane, has so far been the most concerned about awaking the inflation “tiger”, which may prove too difficult to “tame”.

However, Haldane is probably in the minority as several other Monetary Policy Committee (MPC) members have been notably more relaxed. External member, Johnathan Haskel, said “there’s little risk of sustained above-target inflation” in his most recent remarks. This view is shared by Governor Andrew Bailey. In a speech last week, Bailey warned that while the UK’s economic outlook is positive, “large doses of cautionary realism” are needed. Like his counterpart at the Fed, Bailey expects to see inflation edge up in the short term but is less certain about any rise being persistent.

Careful what you wish for

There seems to be a renewed commitment by central banks around the world to get inflation sustainably to their targets. But many are questioning this push at a time when inflation expectations are on the up and there’s clear evidence of simmering price pressures. Policymakers’ apparent obliviousness to the growing inflation risks is sounding the alarm bells in bond markets where a selloff in sovereign bonds was already underway on the back of the vaccine and stimulus-led optimism.

The yield on 10-year UK government bonds (gilts) soared to a one-year high on Monday as investors bet that Britain’s lead in the global vaccination race will bring about a faster recovery, lifting inflation and forcing the Bank of England to begin raising rates sooner than its peers. The BoE is not yet worried about the jump in gilt yields. According to Bailey, the rise in long-term interest rates is “consistent” with the change in the economic outlook. There’s even less cause for panic when looking at real yields. The UK still has one of the lowest real yields among major economies and so the tightening in financial conditions is nowhere near as severe as nominal yields suggest. 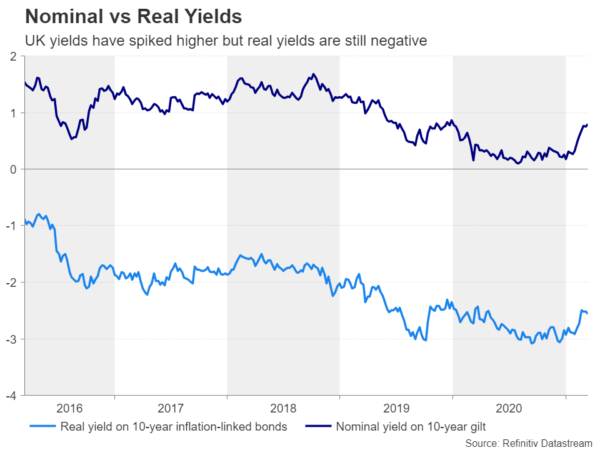 However, should yields continue to surge and sterling appreciates further, tighter financial conditions might become a problem in the not-too-distant future. But those concerns are unlikely to be taken more seriously before the next meeting in May when new forecasts will be available. In addition, policymakers should have a better picture by then of how Boris Johnson’s lockdown exit strategy is progressing, whether the bond market rout has eased and if there’s more concrete signs of inflating picking up.

From a rate cut to a rate hike

In the meantime, interest rate futures have swung from flagging a rate cut to negative territory to a rate hike. The BoE continues to stress that negative rates might still be needed to help the recovery, but investors aren’t so convinced. The pound’s momentum is definitely on the side of the bulls, with its trade-weighted index last week hitting the highest since the Brexit referendum in 2016. Although sterling’s rally has paused against the US dollar, it remains in play against the euro and yen. The European Union’s slow vaccine response is weighing on the single currency, while the yen is being held back by the Bank of Japan’s yield cap. 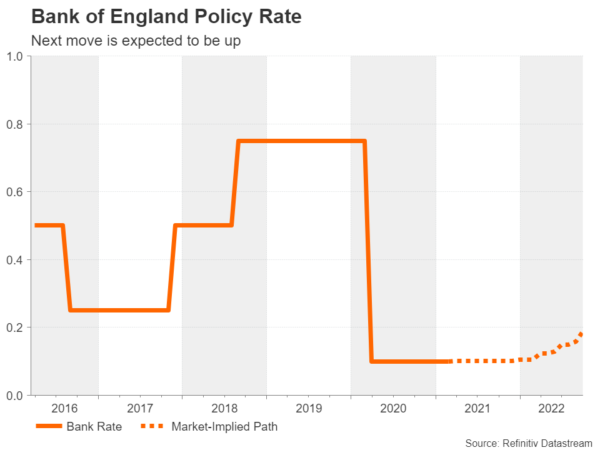 Can the BoE’s indifference boost the pound?

If the Bank, for the time being, maintains its cautious optimism without being too fearful about inflation or higher yields, cable stands a chance of resuming its uptrend in the near term. Though, it would first have to overcome the sticky resistance in the $1.40 vicinity before aiming for the almost three-year high of $1.4235 scaled in February.

However, should policymakers adopt a more dovish stance by highlighting the downside risks and perhaps even strengthening their forward guidance, pound/dollar could slip below immediate support at $1.3791, which is the 138.2% Fibonacci extension of the September downslide. Dropping below the 138.2% Fibonacci, where the 50-day moving average also lies, could push the pair down to the 123.6% Fibonacci of $1.3673.