Bonds And Dollar Steady, Stocks Mixed Ahead Of Fed 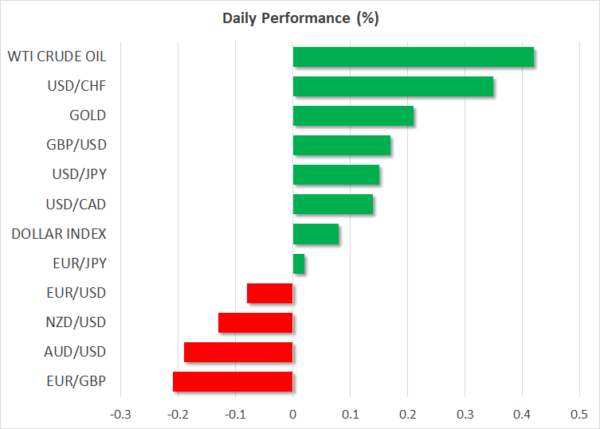 Markets were in a calm mood on Wednesday, though sentiment erred on the side of caution as uncertainty around the FOMC decision kept investors on edge. The Federal Reserve is highly anticipated to hold rates and its stimulus programmes unchanged when it announces its latest policy decision at 18:00 GMT. However, as speculation mounts about how soon policymakers will begin to raise rates now that the US recovery has been cemented with a massive cash boost from Congress and an accelerating vaccination campaign, the updated dot plot chart will take centre stage.

The Fed had planned to freeze its key policy rate near zero through the end of 2023 in December. But the fast-improving outlook for the US economy could push the central bank’s median projection upwards if additional FOMC members pencil in a rate hike in 2023 at the March meeting than they did back in December. Such a move is all it would take to spark fresh panic in bond and stock markets, boosting yields and pummelling shares on Wall Street.

So the question is, will Chair Powell try to contain the surge in yields by providing an explicit warning on what action the Fed could take to counter the move in bond markets, or will he stick to the familiar jawboning of playing down the optimism and simply reiterating the forward guidance?

If it’s the latter, it’s almost certain the yield on 10-year Treasury notes will soon fly past last week’s fresh 13-month peak of 1.642%, bruising risk assets in the progress.

For now, with the exception of the tech sector, US equities are still riding this wave of optimism, setting all-time highs only this week, as there’s little that can dent the positive outlook, especially for the old economy stocks that stand to benefit the most from the eventual lifting of most virus restrictions.

US stock futures were drifting lower today, having pulled away from yesterday’s intra-day records. This weighed on Asian and European shares, which were mixed today, as investors anxiously awaited the outcome of the Fed meeting.

Europe’s ongoing vaccine woes are so far having a limited dampening effect on the region’s stock markets, with Germany’s export-heavy DAX 30 index trading near record territory today, but they have been a bit of a drag on the euro lately. Several EU nations have banned AastraZeneca’s jab after reports of some patients developing blood clots, dealing a major blow to the bloc’s already hampered efforts to get up to speed with its shambolic vaccine rollout. The European Medical Agency will announce its findings tomorrow on whether the AstraZeneca vaccine increases the risk of blood clots.

The euro hovered around the $1.19 level as it struggled to halt a three-day decline following its failure last week to stretch its rebound past the $1.20 mark. The pound also seems to be unable to restore its positive footing against the US dollar and has been consolidating for almost a month now amid the jump in Treasury yields. But there could be some good news for the British currency tomorrow if the Bank of England sounds a more upbeat tone at its latest policy meeting.

The greenback was flat against a basket of currencies, but it was slightly firmer versus the yen at 109.10.

The Australian dollar was today’s worst performer, slipping about 0.20% against its US counterpart, while the kiwi and loonie fell too.

Gold prices continued to crawl higher despite bond yields staying elevated as investors sought a hedge against the risk of higher inflation amid the rise in future price expectations. The precious metal was last up 0.30% at $1736/oz. 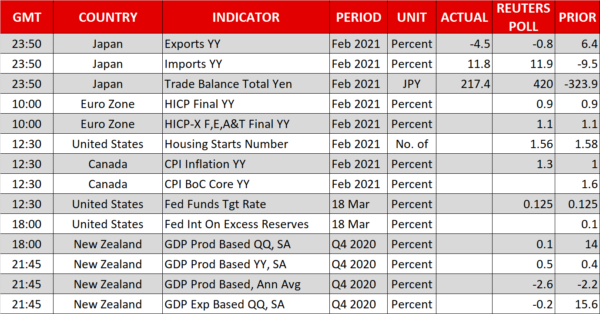