All The Eyes On The FED

The market’s attention is turning to the FOMC’s interest rate decision (18:00,GMT) and the bank is widely expected to remain on hold, keeping rates unchanged at the range of 0.0-0.25%. It should be noted that Fed Fund Futures imply a probability of 97% for such a scenario to materialise. Fresh economic projections are to be released, probably revised slightly to the upwards, given that the US vaccination program is characterized by a fast pace and Biden’s $1.9 trillion fiscal stimulus has been signed into law, with both factors to be incorporated in the projections. As for the dot-plot, should there be more of four policymakers in favour of hiking in 2023, which was the number of policymakers favouring such a scenario in the latest dot plot, the market could perceive this as a sign of earlier hikes. The accompanying statement as well as Powell’s press conference (≈19:00, GMT) could be characterized by a dovish tone, underscoring the uncertainties still ahead and that low rates are to continue to be present in the bank’s monetary policy. Overall, though should the bank’s dovishness outperform market expectations we may see the USD weakening and vice versa.

EUR/USD dropped slightly and currently landed just below the 1.1905 (S1) support line, now turned to resistance. The pair’s movement seems to confirm a downward trendline incepted since the 12th of March, hence we switch our sideways bias as expressed in yesterday’s report, in favour for a bearish outlook for the pair as long as it remains below the downward trendline mentioned. Should the bears actually maintain control over the pair’s direction, we may see it aiming if not breaking the 1.1810 (S1) support line on its journey southwards. Should the bulls take over, we may see EUR/USD’s price action breaking the prementioned downward trendline, the 1.1905 (R1) resistance line and aim for the 1.1990 (R2) level.

CAD continues to strengthen but will it last?

The Loonie seems to have strengthened against the USD yesterday however the pair seems to have started to stabilize somewhat. Macroeconomically, as the market worries for Canada’s employment market found some rest, the next big question ahead could be inflation as Canada’s CPI rates for February are due out, today in the American session. Should the rates accelerate, we may see the CAD getting additional support, as the acceleration could add pressure to the BoC for a less dovish stance in its next meeting or even start curtailing its QE program earlier than expected. It should also be noted that oil prices seem to stabilize somewhat and at rather high levels which could be considered a positive for the CAD.

USD/CAD retreated somewhat yesterday yet the overall picture of a sideways movement between the 1.2520 (R1) resistance line and the 1.2400 (S1) support line, does not seem to change. The pair seems to be testing the downward trendline incepted since the 10th of March and should it clearly break it we would switch our bearish outlook in favour of a sideways bias. On the other hand, the reading of RSI indicator below our 4-hour chart seems to remain between the readings of 30 and 50, reminding us of the presence of the bears for the pair. Should the bears actually regain the initiative over USD/CAD’s direction, we may see the pair breaking the 1.2400 (S1) support line and aim for the 1.2315 (S2) support level. Should the bulls take over, we may see USD/CAD breaking clearly the prementioned downward trendline the 1.2520 (R2) resistance line and aim for the 1.2610 (R2) resistance level. 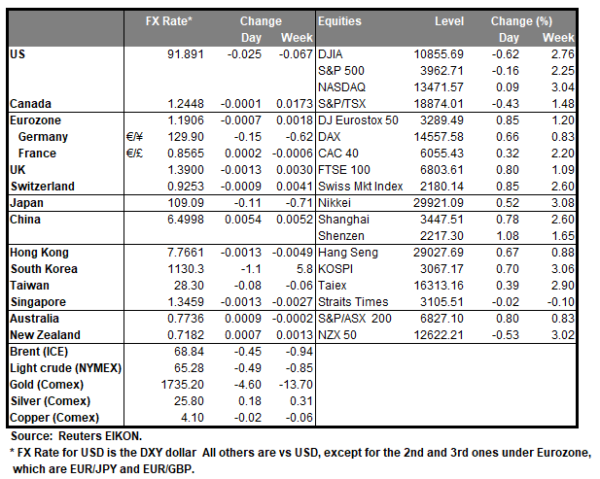 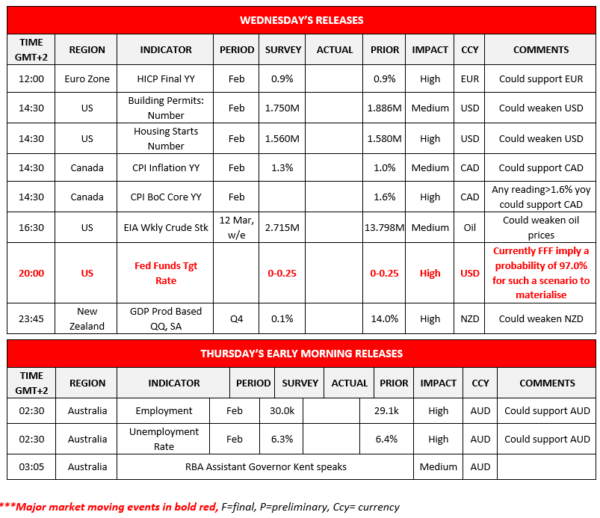