The British pound is in negative territory in the Thursday session. Currently, GDP/USD is trading at 1.3926, down 0.27% on the day.

BoE remains in an accommodative mood

The Bank of England did not surprise anyone with its rate announcement earlier in the day. MPC members were unanimous in their decision to maintain the Official Bank Rate at 0.10% and asset purchases at 895 billion pounds. In its Monetary Summary, members stated that inflation expectations were “well anchored”, but added that the bank stood ready to intervene if inflation faltered. As well, the bank said that it would not tighten monetary policy “until there is clear evidence that significant progress is being made in eliminating spare capacity and achieving the 2% inflation target sustainably”. The BoE reaffirmed its dovish stance, taking a page from the Federal Reserve’s script just one day earlier. Predictably, the pound has reacted in a muted fashion, with slight losses on the day.

The Federal Reserve meeting on Wednesday did not shake up the market, as policymakers left monetary policy unchanged and reaffirmed the central bank’s dovish stance. The Fed’s dot plot was more dovish than expected, with most FOMC members not anticipating a rate hike prior to 2024. At the same time, the Fed’s economic outlooks were upbeat, with the growth forecast upwardly revised to 6.5% this year, compared to 4.3% beforehand. Inflation is expected to rise to 2.4% in 2021, but Powell noted that he expected this to be a temporary spike that would not affect the Fed’s commitment to keep interest rates near zero. The Fed steered clear of talk of tapering its stimulus program and the US dollar lost ground as a result, although it has recovered some of these losses, courtesy of the BoE. 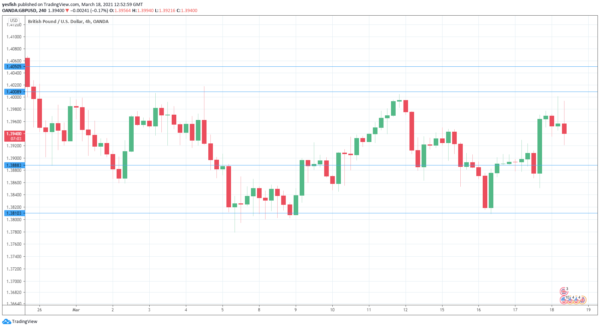