Week Ahead – European PMIs to Chart the Euro’s Course

It seems like a relatively calm week for global markets. The sole central bank meeting will be that of the Swiss National Bank, which will likely be thrilled about the recent demolition of the franc. There is also an overload of economic data on the agenda, the most important of which will be the PMI surveys out of the Eurozone.

The FOMC meeting was a rollercoaster ride for markets. The Fed went out of its way to signal that interest rates will stay on the floor until 2024, despite the trillions in spending that Congress has unleashed and the accelerated vaccination timeline. That message initially torpedoed the dollar and yields, but those reactions soon reversed.

In fact, yields on longer-dated Treasuries hit new cycle highs after the meeting, signalling that investors aren’t buying what Powell is selling. The Fed is saying it will be ultra-patient with raising rates, but traders believe a roaring economy will force the Fed’s hand. Market pricing continues to imply a rate increase by late 2022. 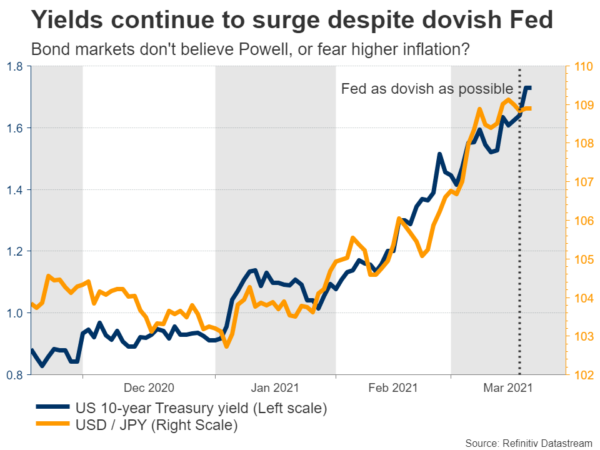 As usual, the market is likely right, and the Fed might have some catching up to do. A spending boom is imminent and one-third of Americans have already received a vaccine jab. It will probably be a stellar summer in economic data, and inflation is coming thanks to a cocktail of supply disruptions and direct money transfers. While the Fed believes this will be transitory, nobody can be certain.

Essentially, the Fed’s super-loose policy message is out of sync with the brighter prospects for the US economy. But once incoming data start to reflect the strengthening recovery and inflation actually overshoots, that message could change quickly.

All this speaks to a stronger US dollar, at least against the euro and the yen. The endgame is the Fed raising rates much earlier than the ECB and the BoJ, as America out-vaccinates and out-recovers Europe and Japan. Indeed, the ECB made it clear that it will fight the spike in European yields and the BoJ is already doing so through its yield curve control strategy. 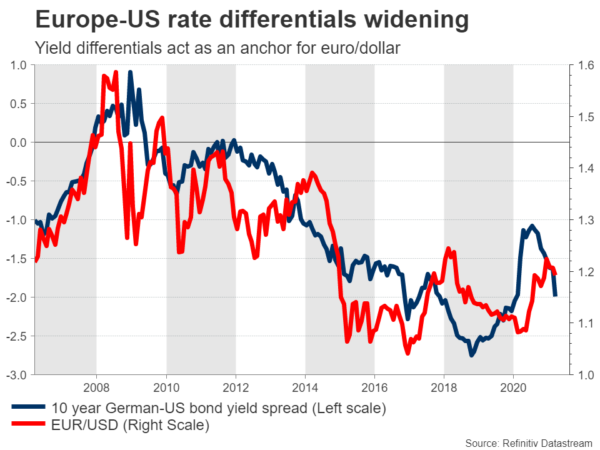 Therefore, the upside for European and Japanese yields is limited, whereas US yields might continue to climb. This means that rate differentials could widen further in the dollar’s favor. The main risk to this view would be a disappointing recovery in the US labor market over the next months, which vindicates the Fed’s go-slow approach.

All eyes on the European PMIs

Much of this strong-dollar story is based on a weak-euro story. Most of the Eurozone remains in a lockdown, the recovery fund money still hasn’t been distributed, and the vaccine rollout has been a disaster.

The negative coverage around the AstraZeneca vaccine lately implies that more Europeans may be reluctant to take that shot, so the Eurozone is unlikely to catch up to America or Britain in the immunization game. This ultimately translates into a lagging economy. 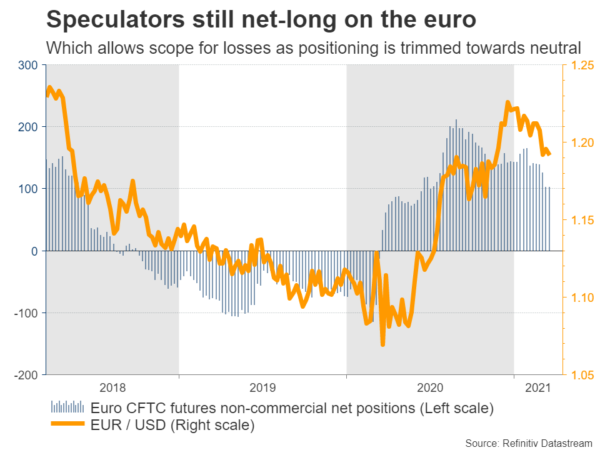 This is why the PMIs on Wednesday might be so important. They will give us a sense of how the Eurozone performed in March and whether the divergence with America continues. Forecasts point to an uptick in both the manufacturing and the services figures, but that would still leave the composite index below 50, signalling contraction in the economy.

Any surprises will be crucial for the euro’s short-term fortunes, even though the bigger picture seems grim. The German Ifo survey for March will also be released on Friday.

Over in Switzerland, the local central bank meets on Thursday. No policy changes are on the cards. The SNB is likely to stress that it will continue to intervene in the FX market if necessary.

A stronger franc can hold back exports and inflation, so the SNB regularly intervenes in the FX market to weaken it. However, this hasn’t been necessary lately. The franc has fallen apart even without any serious intervention as the improving outlook for the global economy curtailed demand for the safe-haven currency, which is also plagued by deeply negative interest rates.

This meeting is likely to be a non-event. Instead, the franc’s trajectory will depend on whether long-term interest rates continue to rise globally. The franc is in the same boat as the euro and the yen in this sense. Since the SNB will not raise rates over the next years, the currency will probably suffer in an environment where foreign yields are rising, as rate differentials widen against it.

Avalanche of US data, focus on PMIs

In America, several second-tier indicators are coming up. Wednesday will bring the Markit PMIs for March alongside durable goods orders for February. Then on Friday, personal income and spending, as well as the core PCE price index for February will be released.

Broadly speaking, any disappointments in the February numbers are likely to be brushed aside as transitory. The cold snap that gripped the nation may have distorted many metrics, and the data reflect a period before the vaccination campaign accelerated and stimulus checks were sent out. 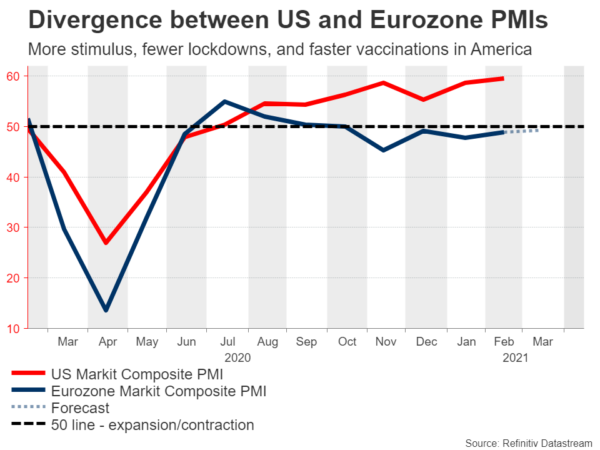 As such, the spotlight could fall on the PMIs. Specifically, on the inflation sub-indices. In February, the services survey showed companies raising their selling prices at the second-fastest pace since records started in 2009, thanks to dramatic cost increases. If this trend persists, it could strengthen the market’s conviction that it’s only a matter of time until the Fed changes tune.

Speaking of the Fed, Chairman Powell will testify before Congress on Tuesday and Wednesday.

Barrage of UK data unlikely to matter much

In Britain, jobs data for January will hit the markets on Tuesday, inflation stats for February are out on Wednesday alongside the preliminary PMIs for March, before retail sales for February are released on Friday.

As for sterling, economic data hardly matter nowadays. These numbers reflect a period when the economy was shut down, so they might be dismal. However, investors are hopeful that better days lie ahead because of the stunning pace of immunizations. 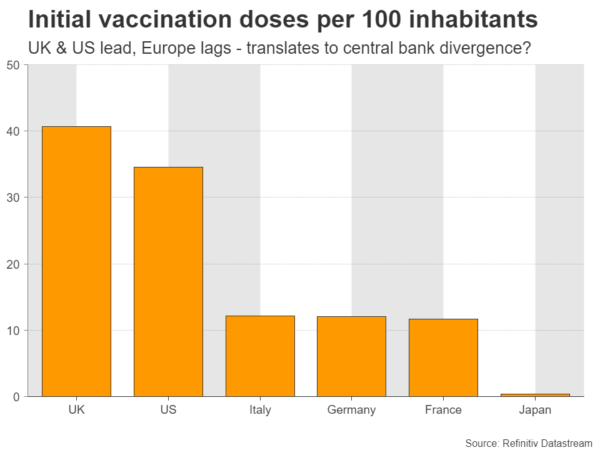 Instead, the pound’s fortunes will depend on how quickly vaccinations proceed and whether Brexit risks relating to financial services resurface. Overall, the outlook for sterling seems positive against low-yielding currencies like the euro and yen, as the Bank of England will probably be among the first central banks to raise rates again, alongside the Fed.